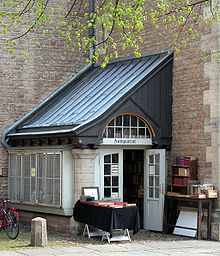 The " Antiquariat am Burgplatz " in Braunschweig is the smallest antiquarian bookshop in Germany.

The Solder antiquarian bookshop in Münster , known from the TV series Wilsberg

An antiquarian bookshop is a company that specializes in trading in used books and operates as a shop or mail order business. The owner and booksellers employed in the bookshop are called antiquaries . The terms second hand books (books for re-use) and rare books (rare books), which are clearly differentiated in English, have a less clear equivalent in German.

The spectrum of second-hand bookshops is wide: it ranges from flea market dealers with a wide range of used books to bibliophile second-hand bookshops with specialist areas. While one of them offers his books to rummage through in boxes, the other selects while shopping and processes the goods with the help of bibliographic reference works.

The leaders of the bibliophile second-hand bookshops include members of the major national professional associations. In Germany they are organized in the Verband Deutscher Antiquare eV . The national associations, in turn, are united in the International League of Antiquarian Booksellers (ILAB). All members have a certain quality standard and are committed to certain ethical guidelines.

Second-hand bookshops deal mainly with books, but also with manuscripts , autographs , graphics , maps , first editions , postcards , newspapers , music and other items. In the 19th century, paintings , furniture and other antiques were on offer, but the trade in these objects has long since shifted to the art and antiques trade.

The term " Modern Antiquarian Books " is selling discounted books from the market or from publishing stocks with reversed retail price ( Remittenden or defects copies ) and cheap reissues of older titles together: a market segment that has less of antique as specialized "modern antiquarian", mail order companies or processed by normal bookshops .

The largest second-hand bookshop in the world - with the slogan "18 Miles of Books" (around 29 kilometers of total shelf length ) - is said to be The Strand Bookstore on New York's Broadway . For about ten years, there are also books villages in Germany - Places with lots of antique shops. The largest book antiquarian in Germany is said to be the Hennwack antiquarian bookshop in Berlin, which is now located in the former premises of the Hentrich & Hentrich publishing house .

With the advancement of reproduction technology, it became possible from the middle of the 20th century to produce facsimiles of rare books. This temporarily led to an increase in the price of antiquarian books, as high-quality original editions were sought as templates for the reprint. In the period that followed, however, prices fell because many customers bought the inexpensive and sometimes high-quality facsimile editions and the interest in the originally rare books decreased.

Since the mid-1990s, second-hand bookshops increasingly began to sell their books on Internet marketplaces. Customers visit the shops less and less, especially because there is a possibility of price comparisons on the Internet and you can usually find what you are looking for more quickly there, even with rare works ( rarities ), books with the smallest editions or when looking for individual volumes of multi-volume works. Sales platforms such as AbeBooks , Antbo , the Central Directory of Antiquarian Books (ZVAB), antiquariat.de , Booklooker or Antiquario present the offer from many antiquarians for a fixed and / or sales commission that can be up to 15% of the displayed price . The online order goes from one of the networked directories worldwide directly to the often small antiquarian, where the found item is packed and sent. This is significant because more and more books with large editions are quickly out of print.

An antiquarian bookshop in Frankfurt am Main

In 2006 there were around 1200 second-hand bookshops in Germany, 80 percent of which are offered for a fee on the various online platforms. antiquariat.de has set standards to which the participating dealers are obliged. This includes, in particular, many years of experience, detailed bibliographical recording of the titles on offer, including all possible defects, fast delivery, fair return options for customers and appropriate packaging. Until the takeover by AbeBooks, a platform belonging to Amazon, in autumn 2015, the ZVAB required a trade license as a condition of participation; In contrast, the online retail giants eBay and Amazon or platforms such as Booklooker also allow private individuals, which, according to some market participants, strongly distorts competition (however, there is no statistical evidence for this).

Meta search engines enable comparative searches on many of these platforms. As a result, the competitive pressure on the market is very high, so that many second-hand bookshops also offer their books without a shop in order to save the costs for one (rent, heating, sales staff). Even printed catalogs, which used to be created by many second-hand bookshops, are now only common at specialty antiquarian bookshops and when selling particularly valuable items. Another drop in prices is due to the availability of digital copies of the holdings of large libraries on the Internet, e.g. B. the Library of Congress . Given this background of digitization, libraries often refrain from purposefully purchasing older literature to supplement their holdings, but on the other hand libraries are also being reduced in size or completely closed (e.g. by monasteries that have closed due to a lack of young people ) and thus (partial) stocks are put on the market prices have also fallen in recent years. In addition, there are changes in lifestyle habits, which often no longer allow a large private library to be set up due to a lack of space or frequent moves .

Especially rare books such as incunabula or old prints are not affected by this drop in prices. These are coveted collectibles that are sought after by libraries, institutions and bibliophile collectors worldwide. These rarities are traded by selected second-hand bookshops and also come onto the market through renowned auction houses and special book auction houses. 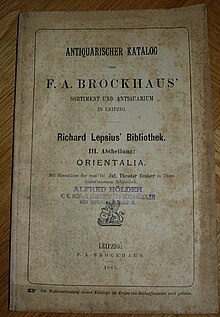 Antiquarian bookshop catalog from 1887 on the sale of Richard Lepsius' library after his death.

Reliable economic data on the industry are rare. A sales survey carried out by the Antiquariat Working Group in the German Book Trade Association (Börsenverein des Deutschen Buchhandels) recorded a sales decline of eleven percent for the branch in 2005 .

According to a study by the ZVAB published in 2007, classic second-hand bookshops achieved an average of 55% of their sales online. The online share has increased significantly within one year (previous year 37%). 19% were implemented through traditional mail order, 18% in shops and 9% through trade fairs and markets. In 2004, 20% of the second-hand bookshops were only active on the Internet.

In German-speaking countries leading technical body which appears in Frankfurt journal is from the Antiquarian (founded in 1948; since the beginning of 2016 with 4 stapling year) that the members of the Association of German Book Trade and also to members of the Maximilian Society distributed becomes.