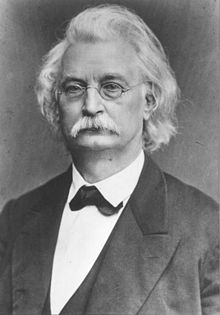 Karl Richard Lepsius was the son of Naumburg District Administrator Carl Peter Lepsius (1775-1853) and his wife Friederike (1778-1819), a daughter of the composer Carl Ludwig Traugott Glaeser and the sixth of a total of nine children. His grandfather Johann August Lepsius (1745–1801) was Lord Mayor of Naumburg.

Karl Richard Lepsius married in Dresden on July 5, 1846 Elisabeth Klein (1828–1899), the daughter of the composer Bernhard Klein and his wife Lili Parthey . After his appointment to Berlin, the family moved into an apartment at Behrenstrasse  60 in Berlin's Friedrichstadt district , and from 1855 in the Villa Lepsius at Bendlerstrasse 18. The couple had six children, including the geologist and professor at the Technical University of Darmstadt Karl Georg Richard Lepsius (1851–1915), the chemist and director of the Griesheim Chemical Factory Bernhard Lepsius (1854–1934), the portrait painter and member of the Academy of Arts Reinhold Lepsius (1857–1922) and the Protestant theologian, orientalist and humanist Johannes Lepsius (1858– 1926). The daughter Anna Isis Elisabeth Lepsius (1848–1919) married the astronomer Karl Wilhelm Valentiner .

Lepsius attended the state school in Pforta from 1823 to 1829 - as did Rudolf Anthes and Karl-Heinz Priese after him , who were to succeed him as director of the Egyptian Museum in Berlin - and then studied philology and comparative linguistics in Leipzig , Göttingen and Berlin . In 1833 he received his doctorate with the work De tabulis Eugubinis . In Paris he turned to the knowledge of the Egyptian language, which Jean-François Champollion had recently established with his translation of the Rosetta Stone . With one of his first writings, Lettre à M. Rosellini sur l'alphabet hiéroglyphiques, Lepsius completed the deciphering of the hieroglyphics , which was not completely successful , brought order to the writing system and thus founded the methodical research into the Egyptian language.

He used a stay in Italy, where he became secretary at the Archaeological Institute in Rome in 1836 , to study the Umbrian and Oscar languages , the remains of which he presented in his book Inscriptiones Umbricae et Oscae (1841). The following year Lepsius was appointed associate professor at the Friedrich-Wilhelms-Universität Berlin .

In this capacity he took over the management of the Prussian expedition to Egypt (1842-1845) sent by King Friedrich Wilhelm IV . Their aim was to bring plaster casts of important sculptures and, if possible, original art objects such as papyri to Berlin, in addition to a search for the so-called unknown, mythological fifth element in the land of the pharaohs . Lepsius had carefully selected his employees: the brothers Ernst and Max Weidenbach , draftsmen, the latter specially trained by Lepsius in copying hieroglyphic inscriptions, Joseph Bonomi , the architect Georg Gustav Erbkam made architectural and topographical photographs and the painters Friedrich Otto Georgi and Johann Jakob Frey created views. The yield of scientific records, epigraphic copies, paper prints , plan drawings and landscape pictures was enormous. The "Royal Prussian Expedition" led Lepsius over the pyramid fields and Memphis up the Nile Valley to Luxor , to the royal cities of the Meroitic Empire in today's Sudan , a little north of Khartoum and further along the White and Blue Nile , deep into Central Sudan. On the way back, the Nile Valley was crossed again, with a detour to the Red Sea and Sinai to the Catherine's Monastery . In the autumn of 1845 Lepsius started his journey home via Syria and Constantinople.

Thanks to an agreement with the Egyptian regent Muhammad Ali , Lepsius had a free hand to take pieces with him - even on original monuments - so that the Royal Museum suddenly became one of the great collections of Egyptian antiquities. The ancient Egyptian monuments that Lepsius brought with him can be seen today in the Egyptian section of the Neues Museum in Berlin. Lepsius put the results together in his main work Monuments from Egypt and Ethiopia (1849–1859, 12 plate volumes). Lepsius never published the text on the "Monuments". His extensive diary was published posthumously by Ludwig Borchardt , Kurth Sethe , Heinrich Schaefer and Walter Wreszinski and edited by Édouard Naville . He wrote reports about his trip in the “ Zeitschrift für Aegyptische Sprache und Alterthumskunde ”, which had been founded by Heinrich Brugsch in 1863, but which Lepsius had taken over in 1864.

In 1846 Lepsius became a full professor and in 1850 a full member of the Royal Prussian Academy of Sciences in Berlin . In 1853 he was elected to the American Academy of Arts and Sciences . In 1864 he became an Honorary Fellow of the Royal Society of Edinburgh . He developed the Lepsius alphabet , a transcription for foreign languages ​​and scripts (1855, revised edition in English 1863 with information on 117 languages). In 1855 he became co-director of the Egyptian Museum in Berlin at the side of the founding director Giuseppe Passalacqua , and after Passalacqua's death he became sole director. He prevailed against Heinrich Brugsch, who was favored by Passalacqua.

In the spring of 1866 Lepsius undertook a second trip to Egypt, in particular to carry out geographic studies in the Delta of the Nile . During this trip he found - together with the Austrian Egyptologist Leo Reinisch - a trilingual inscription in the ruins of Tanis , which had been written in hieroglyphic, demotic and Greek in honor of Ptolemy Euergetes (Ptolemy III) by the priests gathered in Canopus ( Canopus Decree ); In addition to its scientific value, this find was associated with a tangible dispute over the history of science over the authorship of the discovery. On the occasion of the opening of the Suez Canal , Lepsius stayed in Egypt in autumn 1869.

For the Baedeker volumes Lower and Upper Egypt he was involved in the creation of the maps.

In 1873 Lepsius was appointed senior librarian (director) of the Royal Library in Berlin; he held the office until his death on July 10, 1884. His tomb ( honorary grave of the city of Berlin ) is located in the cathedral cemetery II in Berlin-Wedding , Müllerstrasse 71-73, field left wall, G2. A street in the Berlin district of Steglitz-Zehlendorf has had his name since 1934.

Lepsius is considered to be the founder of the scientific study of Egyptian antiquity and thus the subject of Egyptology in German-speaking countries.

Lepsius was awarded the Bavarian Maximilians Order for Science and Art as well as the Royal Gold Medal in 1869 and received the Prussian Order Pour le Mérite in 1872 . He belonged to numerous scientific societies and academies in Germany and abroad.

Directors of the Egyptian Museum Berlin