Neues Museum , seat of the Egyptian Museum Berlin since 2009 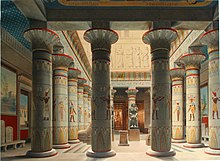 The Egyptian Court of the New Museum Berlin (1862)

The Egyptian Museum Berlin , actually the Egyptian Museum and papyrus collection of the State Museums in Berlin , has been located in the Neues Museum again since it reopened in October 2009 . It houses one of the world's most important collections of Egyptian high culture , which includes statues, reliefs and small art objects from all epochs of ancient Egyptian history . The best-known exhibit and the crowd-1920 applies James Simon on suitable bust of Nefertiti .

The museum went from the Egyptian department of the art collections of King Friedrich Wilhelm III, founded in 1828 on the recommendation of Alexander von Humboldt . emerged. The first head of this department, which was initially housed in Monbijou Castle, was Giuseppe Passalacqua , a merchant from Trieste, whose archaeological collection formed the basis of the department. An expedition under Karl Richard Lepsius from 1842 to 1845 brought many more collectibles to Berlin.

In 1850 the Museum received its own premises in a new building on the Museum Island , which reopened after its reconstruction in 2009 New Museum by architect Friedrich August Stüler . In 1920, James Simon donated the bust of the Egyptian Queen Nefertiti , among other items, to the museum , the most famous exhibit in the collection. Simon had financed Ludwig Borchardt's excavations in Tell el-Amarna , Egypt , and brought the finds to Germany.

Eastern Stülerbau, seat of the Egyptian Museum and papyrus collection from 1967 to 2005

Altes Museum, from 2005 to 2009 the temporary seat of the Egyptian Museum

The collection was torn apart by the Second World War . The Neues Museum was badly damaged in 1943 and numerous exhibits were burned. The collection has been moved to different locations. The bust of Nefertiti survived the war in a tunnel in Thuringia and was later brought to the Wiesbaden Museum .

The main part of the collection was in East Berlin and was exhibited again in the Bode Museum from 1958 . In West Berlin, the rest of the collection that returned from West Germany has been exhibited since 1967 in the eastern Stüler building opposite Charlottenburg Palace. In the inner courtyard of the museum in Charlottenburg there was a buddy bear (“The Mummy” by Ralf Nepolsky), which is considered lost after the museum moved to Berlin-Mitte.

After the reunification , both collections were merged again. The collection in the Bode Museum was closed in the 1990s for renovation work. In August 2005, the Egyptian collection moved from Charlottenburg to the Museum Island, initially to the Altes Museum, where a representative cross-section of the collection was shown until 2009, with the exception of the large objects. The main part of the exhibits planned for the permanent exhibition can be found in their original place in the new museum since October 2009 . However, a large part of the monumental sculpture and architecture cannot be shown there due to lack of space, including the Kalabsha gate and the temple courtyard from the mortuary temple of Sahures . According to the Museum Island master plan, these are only to be shown much later in the controversial fourth wing of the Pergamon Museum, which is yet to be built .

Friederike Seyfried has been the director of the Egyptian Museum Berlin since July 2009, replacing Dietrich Wildung after a twenty-year term in office.

The collection gives a comprehensive insight into the art and culture of ancient Egypt over a period of four millennia. On three museum levels, it illuminates the everyday world in the Nile Valley, the worship of kings and gods, the belief in the afterlife and shows some important ancient Egyptian writings on papyrus. The most famous pieces include the bust of Nefertiti , the "Berlin Green Head" and the Papyrus Westcar .