Expansion of the Egyptian Empire 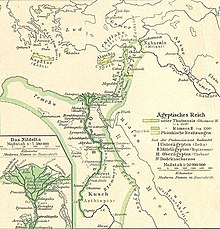 The New Empire includes in ancient Egypt the time 1550-1070 v. BC (18th to 20th dynasty) and, along with the Old Kingdom, is probably the most well-known epoch of the Pharaonic era .

The level of awareness of this approximately 500-year period is due not least to the many colossal structures such as fortresses and temples that the rulers had built. Likewise, many pharaohs are known through their conquests and campaigns. This includes that of Thutmose III. led battle at Megiddo 1457 BC Or the battle of Kadesch in 1274 BC. BC, which Ramses II led 183 years later.

The burial sites in the Valley of the Kings and the Valley of the Queens have also contributed to this. But the most impressive events were the discoveries of the often almost undamaged mummies of the most famous rulers of the New Kingdom in the cachette of Deir el-Bahari (DB / TT320) and in the tomb of Amenhotep II ( KV35 ).

Already the 17th Dynasty at the end of the Second Intermediate Period rebelled against the rule of the Hyksos in the Nile Delta . Important people here are the Ahmosids Ahhotep I and Kamose . After Kamose's death, Ahmose resigned in 1550 BC. The succession who could drive the Hyksos out of Egypt and reunite the kingdom. Ahmose is considered to be the founder of the 18th dynasty. The New Kingdom began with the complete reconquest in the 18th Dynasty (around 1532 BC). Egypt found itself once again to a cultural high point. At the same time, due to its internal changes caused by the Hyksos, the country entered into lively exchange and arguments with the outside world.

The kings Amenophis I and Thutmose I advanced to the Euphrates , where they came into contact with the Middle Kingdom . In the south they recaptured Nubia , which had been lost in the Hyksos era, and pushed the borders far south. The advances into Syria initially seem to have been intended as counter-reactions against the Hyksos.

Under the rule of Queen Hatshepsut , who takes power after the death of her half-brother and husband Thutmose II , the warlike phase seems to be over for the time being. No sooner does Thutmose III appear. , often called Napoleon the Pharaohs , after the death of his aunt and stepmother in 1479 BC. After the succession, large campaigns begin, with Palestine and Syria as far as the area of Karkemish being largely conquered.

As a result, Egypt was confronted more closely than ever with the Middle Eastern culture. The militias were ousted in favor of professional soldiers , whose influence increased over the previously influential class of civil servants. Under Amenophis II there were still clashes with the Syrian empire Mittani on the upper Euphrates, but under Thutmose IV peace was made between the two countries. This was protected by a sophisticated marriage policy . At that time the country was in a cultural boom.

Since the Amun priesthood in Thebes had already become too powerful, began under Amenophis III. a clear demarcation from the exclusive Amun cult . The king withdrew even more than his predecessors to the former royal seat of Memphis and particularly emphasized many other gods, such as B. the goddesses Hathor and Mut and the gods Sobek and Aton . This happened slowly and diplomatically, but was ended abruptly by his son and successor Amenhotep IV , who was in his 5th year of reign in 1356 BC. Made a violent incision. Whether he ostracized the previous belief in Amun and the rest of the gods is still controversial in Egyptology. It is certain that he left Thebes and moved to his newly founded capital Achet-Aton ( horizon of Aton ), which was dedicated solely to his main god Aton.

However, this is not just about the change of the supreme god, but about a new worldview , which instead of traditional magical ideas placed value on a more natural world. This act of Amenhotep IV, who now called himself Akhenaten , represents the turning point in the development of Egyptian culture. After Akhenaten's death, the new rulers immediately tried to find their way back to the old conditions and restore the power of the old gods. Although some of the new influences were initially retained under Tutankhamun and Eje II . B. in art, however, the hatred for Akhenaten's brutal break with the old traditions was so great that one tried to erase the memory of this time once and for all. He was accused of violating Maat rules .

The Pharaoh's throne was taken over by a former general; At the same time, Egyptian rule in Syria was smashed from the north by the Hittites , under King Šuppiluliuma I. This attack was possibly triggered by the so-called Dahamunzu affair , in which an Egyptian queen asked for a Hittite prince because her husband, the king, had died and she had no son. After a few correspondence, Šuppiluliuma sent one of his sons, Prince Zannanza, who died shortly afterwards under circumstances that have not yet been clarified. Since Šuppiluliuma I assumed an assassination at the Egyptian court, he attacked Egypt.

General Haremhab, who already held a high office under Tutankhamun, was the last pharaoh of the 18th dynasty. He ascended the throne around 1319 BC. BC and had many remains of the Amarna period destroyed.

When Ramses I came to power in 1292 BC BC, once a high general under Haremhab, the 19th dynasty was founded. His son Seti I was the first important pharaoh of this dynasty. In his first year of reign in 1290 BC he already led A campaign to Syria and later also to Libya . Seti I left behind many buildings from his term of office, which today are among the most beautiful in Egypt. In Abydos archaeologists found the so-called Osireion , which was used to store his corpse until his burial in 1279 BC. Had served.

The son of Seti I, Ramses II , ascended the throne after the death of his father. During his 67-year reign, he rose to become today's most famous Egyptian pharaoh. In the first few years he had to deal with the threat posed by the Hittites on Egypt's eastern border. Since Ramses II felt compelled to intervene when a Palestinian revolt against the occupation of the country flared up, the battle of Kadesh broke out . It is richly documented on the walls of the temple complexes of Karnak , Luxor , the Ramesseum and other temples, but depicted in a falsified manner. The armed conflicts with the Hittite kings continued for years. Only when internal unrest shook the Hittite empire and the threat from the Assyrians increased significantly, a peace treaty was negotiated. He was born in 1259 BC. Between Hattušili III. and Ramses II closed.

The building activity of Ramses II reached its climax with the construction of the Ramesseum and the temple of Abu Simbel , which he built in honor of himself and not least for his wife Nefertari , to which a smaller temple is dedicated.

Ramses II died at the old age of 92 and was buried in the Valley of the Kings .

Under Merenptah , the 13th son of Ramses II, revolts broke out in Syria, but he was able to fight back. There is also an Egyptian delivery of wheat to the Hittite people when a famine broke out in their country . In a second attack by the Libyans, which led to destruction in the western oases and Nubia, the intervention of the Merenptah was again successful.

After his death in 1203 BC Amenmesse took over power in the empire. This could have been the son of a concubine of Merenptah, but this has not been proven. Amenmesse ruled for just under three years, however, and with Seti II the son of Merenptah probably ascended the throne. But he too was granted only a short time as pharaoh, so that his younger brother Siptah took over the affairs of the empire. He also died in his sixth year in office. His mother Tausret now assumed the full title of pharaoh and ruled the country for eight years until 1186 BC. Chr.

The assumption of power by the new Pharaoh Sethnacht is largely unclear. So it is not known who he was and how he came to the throne. This must have happened in the brief confusion of the throne after Queen Tausret. He is said to have fought several wars and died after only three years of reign.

His son Ramses III. was probably the last great pharaoh in Egyptian history. In his third year in office he was confronted with incursions by the Libyans, who had allied themselves with the Meshvesh and Seped . They raided the western Nile Delta, but were defeated by the Egyptian army.

The onset of the great migration from the east then brought about 1177 BC. The sea ​​peoples storm with it. In the sea ​​and land battles of Ramses III were predatory ethnic groups, who had advanced by ship over the eastern Mediterranean and by land from the Aegean and the southwestern Anatolian region and attacked the Nile Delta. devastatingly beaten.

A few years later, the Libyans attacked again in the Nile Delta. But this time too, Ramses III struck. them back.

After his death, some kings named Ramses took over the empire. Their family origins are mostly still unclear. But there seem to be some sons of Ramses III. and Ramses IV to have been there. Ramses IV, who died in 1152 BC. Followed his father, ruled only until 1145 BC. Chr.

Under his successors Ramses V to Ramses VIII there were throne disputes, some of which took on civil war-like proportions. This probably also had the consequence that confidence in the office of Pharaoh sank and at the same time the power of the priests, especially in Thebes , increased.

It was not until Ramses IX. and Ramses X. the country regained a certain stability. But the power of the priests of Amun had become so great that they were at the end of Ramses XI's term in office . placed on the same level as him. The collapse of the traditional pharaonic dynasties and with it the beginning of the Third Intermediate Period was about to begin .