This article or section needs to be revised. More details should be given on the talk page for this article in the section Greek name (from 2013!) And revise . Please help to improve it , and then remove this flag.

Like his predecessor Haremhab , Ramses I also comes from the ranks of the military leaders. As a political foster son of the haremhab, who had no children himself, he was initially a simple officer , then troop and fortress commander, and later on the general staff. Eventually he became the king's envoy and general of the chariot troops before Haremhab appointed him vizier . In this capacity he became the king's representative in Upper and Lower Egypt.

The traditional designation according to the festival calendar did not take place under Haremhab. The title "King's son of the Haremhab" with the nickname Neb-Henemmet was only applied to the pre-existing sarcophagi of Ramses I after Haremhab's death . One was found in Thebes , the other in Gurob . The special circumstances of the subsequent affixing of the “prince's title” show that Ramses I had to assume that he would be buried in his function as vizier before he ascended to the throne. In this context, Ramses I referred to the decision of the Council of Gods to appoint him as the successor of Haremhab as the new king of the two countries .

His son Seti I also referred to the "neglected circumstances in Egypt" before his father Ramses I ascended the throne. The official appointment as successor was also obviously opposed to the practice that only biological sons of the reigning king could be designated as successors and publicly proclaimed for later coronation . Thus, Ramses I, like his predecessor Haremhab or Hatshepsut , was one of the few ancient Egyptian kings who could not refer to an official designation.

Stela of Ramses I before Seth

At the beginning of his reign, Ramses I was well over 50 years old. During his very short reign of only 16 months, Ramses I left only a single stele that could be dated to him . He continued to consolidate and stabilize the iniquity and after his death left behind an orderly government apparatus with loyal officials.

His son Sethos I undertook a punitive expedition to southern Palestine as crown prince ; the prisoners of war were donated to the temple in Buhen . This temple was dedicated to Amun - Min by Ramses I , as the stele from Wadi Halfa reports. 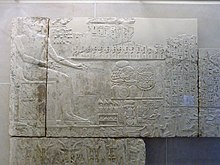 Construction work on the Karnak Temple continued: the 2nd pylon and the great hall of columns began. Further references to the king can be found in Memphis and Heliopolis as well as the temples of Seti I in Abydos and Qurna , where he built memorial chapels for his father. The well-known statue of Horus von Mesen together with Ramses I also dates from the time of Sethos I.

As king, he began building a new grave in the Valley of the Kings ( KV16 ), which is best known for its well-preserved and high-quality wall paintings depicting texts and scenes from the port book .

His tomb was not finished when the pharaoh died. The mummy was buried in an antechamber that had been prepared as a burial chamber.

The period of the heliacal rise of Sirius mentioned in the boar calendar of Amenophis I determines the year of the takeover of government by Ramses I, the date of which corresponds to the assignment of Jürgen von Beckerath , among other things .

Odyssey of the Mummy

The king's mummy experienced a true odyssey . Already in the 21st dynasty (under Smendes I / Pinudjem I ) it was brought to the grave of Seti I ( KV17 ) together with that of his grandson Ramses II , probably as protection from grave robbers . Under Siamun (21st Dynasty) another reburial took place in the famous cachette of Deir el-Bahari (DB / TT320). After the discovery of the cachette, Abd el-Rassul sold the mummy to an American. In 1870 it appeared in the Niagara Falls Museum and stayed there until 1999, when it was sold to the Michael C. Carlos Museum in Atlanta / USA. After long negotiations, it was returned to the Cairo Egyptian Museum in 2003. Zahi Hawass identified her as the mummy of Ramses I, mainly because of the similarity to that of Sethos I. Doubts about her identity are in order as long as no DNA analysis has been carried out. On March 9, 2004 she found her (temporarily) final resting place in the Luxor Museum , together with that of Ahmose , the founder of the 18th dynasty .

Commons : Ramses I.  - Collection of pictures, videos and audio files