Abydos (from ancient Egyptian Abedju ; Arabic أبيدوس, Abīdūs ) is an archaeological site near Sohag on the western bank of the Nile, 160 kilometers north of Luxor and about 15 kilometers southwest of today's city of el-Balyana .

In ancient times, the place was the eighth Upper Egyptian Ta-wer - Gau attributed and was one of the most important cemeteries in the country. In the Middle Kingdom , Abydos developed into the main cult place of the god Osiris and served as the venue for the annual Osiris Mysteries .

The name Abydos comes from the ancient Greek Ἄβυδος, which the Greek geographers of Abydos in Asia Minor probably adopted because of the sound similar to the ancient Egyptian name. Otherwise, both places have nothing to do with each other. The ancient Egyptian Abedju probably means something like "the hill of the reliquary".

The oldest traces of settlement from Abydos date from the late pre-dynastic period and were found in the area of ​​the later Temple of Seti I and the actual city. It cannot be determined whether Abydos was already fortified at that time.

In ancient times, dogs and jackals were often found in cemeteries, and they were considered god-like guardians of the necropolis. In Abydos this was the dog or jackal-like god Chontamenti ("First of the Westerners = deceased"), who was initially worshiped there as a local deity.

Up to the end of the 1st dynasty in Abydos, at the same time as the pharaohs , servants and followers for the service of the rulers in the hereafter were buried, initially up to around 300 corpses, but increasingly fewer towards the end of this practice. Apparently ( for example ( memento from July 8, 2012 in the web archive archive.today ) the Egyptologist David O'Connor) the companions were killed for this purpose.

The temples for the death cult of the deceased kings were located closer to the fruiting land and were built in the early days from wickerwork that has now fallen apart. They can only be recognized by members of the court through the rows of graves surrounding them.

From the 2nd dynasty brick construction began, of which two are still standing: the Schunet el-Zebib (" Raisin Barn ") and another, in which the Coptic monastery Amba Mousa is located. The tombs known as Abydos' solar boats date from this time .

At the latest since King Djoser from the 3rd dynasty , Abydos was abandoned as a royal necropolis and the rulers in Lower Egypt were buried ( Saqqara , Giza , Abusir , Dahshur ), but a sham burial appears to have been carried out in Abydos. But even in the 6th Dynasty , many high officials were buried in Abydos.

King Pepi I built a burial chapel in Abydos, which over the years developed into an Osiris temple and the remains of which are still there. In the first interim period , Abydos was part of the Theban territory, but was fiercely contested. The father of King Merikare is said to have destroyed the old royal tombs. During this time of cultural reorientation, Abydos took over the status of Memphis as a royal residence necropolis . This profound change represented a reference to the ancient traditions of Abydos as a royal necropolis of the early days.

With the change to Abydos as a renewed center of the dead and the upgrading to the “holy cult place of Osiris” a “ theological anachronism ” ensued, which relocated the worship of Osiris that arose at the end of the Old Kingdom to a time when the deity Osiris did not yet exist. The rites of a mock burial thus became the mystery of Osiris, who was "buried in Abydos" and then resurrected in his statue. During this time Osiris allied himself with the ancient necropolis god Chontamenti.

Since the Middle Kingdom it was the wish of many Egyptians either to be buried in Abydos or at least to be present there with a stele . As a result, many officials in Abydos had a chapel built with steles, statues and an offering table, or even just a stele. Most of the stelae of the Middle Kingdom come from Abydos. The Osiris Mysteries also appear to have been performed in Abydos. They are mentioned on different steles. But there are also extensive cemeteries from this time near Abydos.

From the 11th dynasty, an old temple was rebuilt in the center of the city. Sesostris III. built a huge Osiris tomb for himself in the southeast of Abydos. The valley temple was located on the edge of the desert, an approx. 700 m long pathway led to the grave district, which formed a T-shaped brick platform 156 m wide and 160 m long. In the northern part, two shafts led into the 24 m deep grave. The 180 m long grave corridor was closed with granite and quartzite slabs. The actual coffin chamber was hidden away. The elaborate system suggests some Egyptologists that Sesostris III. was not buried in its pyramid but here.

Next to the valley temple was the city of Wahsut , which was owned by Sesostris III. founded, but was abandoned in the New Kingdom . It served the temple cult, but was also of supraregional importance.

King Chendjer ( 13th Dynasty ) had a life-size statue of Osiris erected in the tomb of Djer , which was now considered to be the tomb of Osiris.

After the unification of the empire , Ahmose built for himself, his grandmother Tetisheri and also for Queen Ahmose-Nefertari south of that of Sesostris III. built temple complex mock tombs with pyramids . Still under Amenhotep III. the tomb of Djer was regarded as the tomb of Osiris.

In the 19th dynasty it was mainly Seti I and Ramses II who built huge temples in Abydos ( mortuary temple of Set I , temple of Ramses II ). The high priests of Osiris, such as B. Wennefer were leading figures in the country at this time.

Abydos retained its importance in the late period. From the Third Intermediate Period there are important burial structures of high officials and in the 25th Dynasty (approx. 660 BC) some members of the Kushite royal family were buried here.

A garrison was stationed in Abydos in late antiquity. Little is known about the extent of the city, Roman and Coptic remains of houses in and around the great temple of Seti I are the only indications. In the area of ​​the Amba Mousa monastery there has been a village called Deir Sitt Damyana since the Middle Ages. Further remains of Coptic settlement are a church built over a temple from the New Kingdom and smaller residential buildings in ancient graves.

In the early Umm el-Qaab cemetery , about 3 kilometers from the edge of the desert and 2 kilometers from the city, the graves of most of the rulers of the early dynastic period of Egypt were located in the so-called B cemetery. In the underground cemetery next to it, more graves were discovered that could be assigned to the kings of the pre-dynastic period . The most important archaeologists who worked on this royal cemetery were Émile Amélineau , Flinders Petrie , Edouard Naville , Eric Peet and, since 1997, the DAI in Cairo under Werner Kaiser and Günter Dreyer . In 2000 the oldest ship finds from around 3000 BC were made here. Made. Fourteen approximately 20 to 30 m long hulls were buried in the sand and are being salvaged and preserved by a team from the University of Pennsylvania Museum, Yale University and the Institute of Fine Arts at New York University. The ships are assigned to the 2nd dynasty.

One kilometer north of Umm el-Qaab is the hill of ruins Kom el-Sultan . There are various tombs, a craft settlement and the temple of Osiris - Chontamenti . The development of the complex goes back to the predynastic period.

Mortuary temple of Seti I. 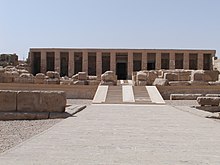 Mortuary temple of Seti I.

The temple of Seti I is still very well preserved: Two wide courtyards lead to the temple house with its pillar facade, which is adjoined by two other columned halls. This is followed, slightly elevated, by a series of seven sanctuaries dedicated to the local deities ( Osiris , Isis and Horus ), the imperial deities ( Amun-Re , Re-Harachte and Ptah ) and Sethos. The Osiris Shrine is adjoined by rooms in which mystery celebrations were held. The important King List of Abydos is located in a southern extension of the temple . Behind this temple there is a sham tomb of the king in the shape of the Osiris tomb ( Osireion ), i. H. an underground island surrounded by a moat.