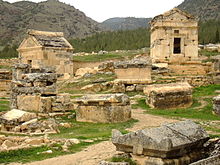 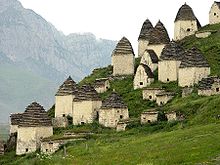 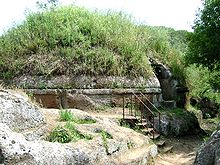 Tumulus in the Etruscan necropolis Banditaccia near Cerveteri

A necropolis , also necropolis , or city ​​of the dead ( ancient Greek νεκρός nekrós , German 'dead' , πόλις polis , German 'city' ) is a structurally designed larger burial - and consecration place of antiquity and prehistory . If the structural component is missing, it is a burial ground . Necropolises were often located away from the housing estates . In Greek, Roman, Phoenician and Jewish places this location was prescribed for religious reasons.

In Germany z. B. only concentrations of Neolithic megalithic sites , such as the Oldendorfer Totenstatt , or multi-period sites with "built" grave sites, as in Soderstorf called necropolises.

The Etruscans had extensive necropolises, with various systems found in Cerveteri , Tarquinia , Populonia , Norchia and other places in Etruria . The Elyseian Fields ( Alyscamps ) in Arles , France and the necropolis in Carmona , southern Spain are known as Roman necropolis . A necropolis was excavated in Civaux , France from the Merovingian period .

Under the St. Peter's Basilica in Rome, excavations commissioned by Pius XII. around 1950 a whole street of graves from the Roman Empire was exposed. Bones attributed to the Apostle Peter were also found in this Vatican necropolis . 25 km southwest of Rome you can visit the burial streets of the necropolis of the Ostia Antica archaeological site . Here the city of the dead lies in front of the eastern city gate on both sides of the road to Rome.

Among the ancient Egyptian cultural sites, the necropolis (necropolis) of include Saqqara , Amarna , Thebes (see Valley of the Kings ), Giza , Qubbet el-Hawa and Umm el-Qa'ab . The capital of the Nabatean kings in today's Jordan , Petra , was not only a residential and residential city, but also a rock necropolis.

In the medieval City of the Dead in Cairo were Fatimid and Mamluk buried. Between magnificent minarets and clay booths, 300,000 people still live in the necropolis, crowded together in "residential graves".

Iron Age cemeteries and later cemeteries with underground tombs were discovered in Yingpan on Kum Darya (200 km west of Loulan ), with the Yingpan man found there.

With the Tangut necropolis , one of the world's largest necropolis was discovered in the autonomous region of Ningxia near Yinchuan .

The city of Colma is an active necropolis. The San Francisco cemeteries were relocated to Colma.

More recent tombs also refer to the historically established term necropolis: for example the Glasgow Necropolis from the 19th century, the necropolis on the Kremlin wall in Moscow in the first half of the 20th century and the artist necropolis , a current art project near Kassel.