Etruria , Latin Etruria , synonym Tuszien , also Tuscien , Latin and Italian Tuscia , is an ancient landscape in central Italy and describes the heartland of the Etruscans between the Arno and the Tiber . Later parts of Tuscany north of the Arno were also included. Etruria is not identical to Tuscany, but also includes the northern part of what is now Lazio and parts of Umbria . Etruria is understood, especially in Etruscology, to be the later settlement area of ​​the Etruscans, which stretched from the Tiber to the Po . Therefore, in Etruscology, a distinction is made between the Tyrrhenian Etruria on the Tyrrhenian Sea and the Padan-Adriatic Etruria in the Po Valley .

The Etruscans were one of the most influential peoples in the Mediterranean . Their area of ​​influence extended in the 7th and 6th centuries BC. BC far beyond the actual Etruria and also included the Po plain and parts of Campania . In the 4th and 3rd centuries BC Important cities of southern Etruria, including Veji, Tarquinia, Cerveteri, Vulci and Volsinii, were subjugated by the emerging Roman Republic . The cities of northern Etruria, including Arezzo, Volterra, Perugia and Cortona, on the other hand, concluded treaties of alliance with Rome and were able to retain a certain autonomy until they were finally granted unrestricted Roman civil rights in 90 BC. BC also formally lost their independence.

With the administrative reform of Octavian, later Emperor Augustus , in 40 BC. The region VII "Etruria" was created, which now formed one of the eleven regions of Italy and roughly corresponded to the heartland of the Etruscans. Thus the suburbs of Rome separated from the city by the Tiber, such as B. Trastevere , to the Etruria region. In the further course of the imperial era , the name "Tuscia" arose for this region and gradually replaced the name "Etruria". In the Roman Republic only the Etruscans were called "Tusci" (singular "Tuscus"), their settlement area, however, as "Etruria". With the reorganization of the administration by Emperor Diocletian and his successors, the eleven regions of Italy were combined into eight provinces . Tuscia was united with Umbria to the province V "Tuscia et Umbria", which existed at least until the year 400.

After the fall of the Western Roman Empire , the area came under the rule of the Ostrogoths and later the Byzantines , before it was conquered in 569 by the Lombards who established the Duchy of Tuscia. With the submission of the Lombards by Charlemagne , the duchy was elevated to a county and later a margraviate . The southern part of Etruria, about the scope of the present-day province of Viterbo , went with the Pippi's donation to the Papal States . The northern part formed under the Staufers together with Lombardy and the margraviate of Verona the Kingdom of Italy in the Holy Roman Empire . After the Hohenstaufen dynasty, the region fell into the rulers of Lucca , Pisa , Florence and Siena .

The term "Etruria" with its historical references to the Etruscans lived on until the Renaissance . When Cosimo I de 'Medici became Grand Duke of Tuscany (Granduca di Toscana) in 1569 , he called himself Magnus Dux Etruriae , making explicit reference to the Etruscan forerunners. His successors, including Ferdinando II. De 'Medici and Cosimo III. de 'Medici , used this title. The name "Toscana" is derived from "Tuscia".

After the French conquest of Tuscany in 1799, an "Etrurian Republic" was proclaimed, and in 1801 the Kingdom of Etruria was formed under a sideline of the Bourbons that had ruled Parma up until then . In 1807 this French satellite state was directly connected to France. In 1814 the Grand Duchy of Tuscany was restored. In the course of the Risorgimentos , Tuscany was annexed to the Kingdom of Sardinia-Piedmont in 1860 and from 1861 belonged to the United Kingdom of Italy . Tuscany later became one of the 20 Italian regions . The southern part of Etruria was until the proclamation of the Kingdom of Italy in 1861, part of the Papal States .

The territory of ancient Etruria now includes Tuscany, the northern part of Lazio and a western part of Umbria. The southern third of ancient Etruria has kept the name Tuscia as a landscape. The province is called Viterbo after its capital . The name Tuscia is still used in everyday life. For example, the State University of Viterbo, founded in 1979, was named University of Tuscia . 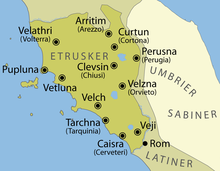 Etruria with the most important Etruscan cities