The Papal States ( latin : Dicio Pontificia or status Pontificius , Italian : Stato della Chiesa or Stato Pontificio ) was the secular-political dominion of the Pope , which since 756 by the Pippinsche donation (also Pippi niche donation ) from the lands of the Bishop of Rome (patrimony Petri) and, after an eventful history, lasted until October 6, 1870, when the annexation of the Papal States to the Kingdom of Italy was proclaimed after a referendum (cf. Risorgimento ).

Since the Lateran Treaty of 1929, in which the state sovereignty of the Vatican as the secular seat of the Pope was recognized by the Italian government, the Vatican City in Rome has been regarded as the remaining successor state to the Papal States.

The Papal States was basically an association of states, which in the course of the Middle Ages encompassed ever larger parts of central Italy as far as the Adriatic , starting from Rome and Lazio . In addition, two southern Italian exclaves enclosed by Neapolitan territory - Benevento and Pontecorvo - belonged to the Papal States; Since the temporary papacy in Avignon, enforced by France in the 14th century, the County of Avignon and the Comtat Venaissin were also part of it until the French Revolution .

Since the 4th century, the property of the Roman Church in Italy increased through donations of numerous goods in southern and central Italy and on Sicily . The possessions called Patrimonium Petri ("Property of Peter ") made the Bishop of Rome one of the largest landowners in Italy in the 6th century. Through the reform of Pope Gregory I and the change to a tight central administration, the Patrimonium of Petri increasingly took on the character of a rulership. With reference to an alleged document of Constantine, the Constantinian donation , the popes raised the claim to an independent spiritual and secular rule. Although the Donation of Constantine was exposed as a forgery by Lorenzo Valla as early as 1440 , it remained the basis for the papal claim to rule in Italy for centuries.

At the beginning of the 8th century there were disputes between the Western Roman Church, the Lombard kings and the Eastern Roman Empire , as a result of which many possessions were lost again. Only the ducat (Byzantine administrative district) of Rome remained as a rulership.

The donation of Sutri in 728 is seen in Italy as the earliest possible founding of the state or as a key event on the way to the formation of the papal state. In order to gain the backing or at least neutrality of the Pope against Longobard rivals, the Longobard King Liutprand is said to have handed over the Lazio city of Sutri to Pope Gregor II, which had been taken from the Byzantines. After another confrontation was settled in 739, Liutprand added the places Amelia, Orta, Bomarzo and Bieda to 741 and 742, respectively. However, when his successor Aistulf set out to conquer Ravenna and Rome, the papacy called on the ruler of the Franks, who had already mediated in 742, to help.

As Pippin III. 751 was elected King of the Franks , he had Pope Zacharias confirm his choice. This confirmed the Carolingians as a royal family. The expansionist efforts of the Lombard king Aistulf in Italy induced Pope Stephen II to turn away from Byzantium in 754 and to ask the Franks for protection in return for their legitimacy. 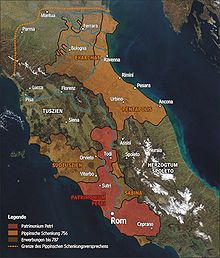 The formation of the papal state 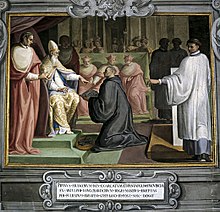 As a Catholic king, Pippin promised to hand over the territories that had been recaptured from the Lombards to the successor of Peter. In the deed of Quierzy 754 he guaranteed the Pope the Ducat Rome, the Exarchate Ravenna , the Pentapolis , Tuscany , Veneto , Istria and the Duchies of Spoleto and Benevento as ecclesiastical territories. This promise became known as the Pippin donation and is considered the basis of the Papal States . Since the deed of donation did not survive the ages, the exact content of the deed is unknown, so that the exact circumstances of the Pippin donation are controversially discussed by historians.

With the imperial coronation of Pippin's son Charlemagne by Pope Leo III. on Christmas Day 800, the Frankish rulers claimed the assumption of the Roman imperial dignity. Linked to this, the sacred component was also adopted, which is why the Franconian emperors saw themselves as protectors of Christianity and sought a close relationship with the papal state.

In 756, the Papal States acquired the Ravenna Exarchate through donations, until 787 Sabina , southern Tuscia and some smaller territories were added. The Papal States now stretched from coast to coast. In 962 the Pippin donation was confirmed by Emperor Otto I in the Privilegium Ottonianum .

In 1201 the Duchy of Spoleto was added. In 1213, Emperor Friedrich II officially recognized the Papal States in the gold bull of Eger .

In the 15th century further areas were added around Parma , Modena , Bologna , Ferrara , Romagna and Perugia . The papal state now reached to the limits of the Pippin promise of donation and had reached its greatest extent under Pope Julius II .

The importance of the papal state as a territorial rulership declined again from the 16th century, it could not rise above other territorial rulers in Italy in the struggle for rule in Italy and was always dependent on other great powers. At times, parts of the Papal States - such as Ferrara or Urbino - were completely lost as hereditary duchies of powerful princely dynasties, but around 1600 the popes succeeded in regaining these areas. 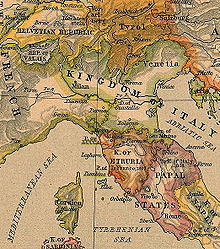 In the course of the French Revolution and during the Napoleonic rule over Europe, the territory of the Papal States shrank. The cities of Bologna and Ferrara were spun off in the First Coalition War in 1796 and, together with the Duchy of Modena, first formed the newly founded Cispadan Republic , in 1797 part of the Cisalpine Republic (from 1802 Italian Republic and from 1805 Kingdom of Italy ). In 1798, the Roman Republic was proclaimed in Rome , but it was already lost in the Second Coalition War in autumn 1799 . Pope Pius VI (1774–1799) died as a prisoner of the revolution in southern France, his successor Pius VII (1800–1823) could not be elected in Rome as usual, but had to be elected under Austrian protection in Venice. However, Pius VII soon reached a political compromise with Napoleon, which also led to the restoration of the papal state in 1801. This papal state secured its continued existence primarily through the Concordat with Napoléon Bonaparte of July 15, 1801. The climax of this phase of equilibrium was Napoleon's coronation as emperor in the presence of the Pope on December 2, 1804.

However, the Pope's refusal to join an alliance against Great Britain led to a conflict with the French Emperor a few years later. In November 1807, French troops entered the Papal States and occupied Rome in February 1808. On May 7, 1809 Napoléon Bonaparte declared in Vienna that Pope Pius VII had ceased to rule as secular ruler, which in fact meant the annexation of the area by France. His decree of May 17th formally regulated the integration. On June 10, 1809, the secularized papal state was united with the French Empire ( Tiber and Trasimenus departments ) and with the Napoleonic Kingdom of Italy (Urbino, Ancona, Macerata provinces). Only spiritual power was left to the Pope. Since Pius VII protested against these decisions and on June 10th pronounced the ban on anyone who would help to implement them, the French General Étienne Radet forcibly entered the Quirinal Palace on the night of July 6th , arrested the head of the church and brought him with his Secretary of State, Cardinal Bartolomeo Pacca , first to Grenoble , then to Savona . The Pope was imprisoned and interned in Fontainebleau , France, in 1812 . Instead, Napoleon's son Napoleon Franz Bonaparte was given the honorary title of King of Rome when he was born in 1811 . 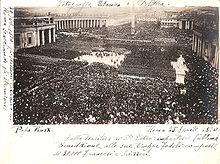 Pope Pius IX last blesses his troops of around 20,000 men in St. Peter's Square in 1870, photograph from April 25, 1870, private property of the Burzagli family

Only after the fall of Napoleon in 1814 could the Pope return to Rome; In 1815, Europe was reorganized at the Congress of Vienna in the spirit of restoration and the papal state was restored within its borders from 1797 - that is, renouncing the former southern French exclaves. During this time the Papal States had a relatively small army, according to Bisinger's "Comparative Representation of the Basic Power or State Forces of All European Monarchies and Republics" (1823) it comprised about 9,100 men, the fleet stationed in Civitavecchia had two frigates.

In the period that followed, the Papal States had an extremely bad reputation among the educated European public - especially after the death of Pius VII in 1823 - as a refuge for mismanagement, reaction and oppression, which is typical of police states. The opera Tosca is an example of this . Pius VII followed Leo XII. , Pius VIII. And Gregory XVI. (1831-1846).

In 1846 Pius IX. Pope (and remained so until 1878). He initially acted liberally (1846–1848) and became an idol of the Neoguelfen (the Catholic wing of the Italian liberals and nationalists of the Risorgimento ); but soon he no longer met their high expectations. As a result, in the course of the revolutions of 1848/49 in large parts of Central Europe, there was also a revolution in Rome, and the Pope had to flee. On February 9, 1849, a republic was proclaimed in the Papal States (see Roman Republic 1849 ).

From April there was a military intervention by France and Spain; in July the papal state was restored. Since then Pius IX persecuted . a reactionary course based on Austrian politics . This protector was in 1859 by the war defeat lost Austria against France and Piedmont-Sardinia; and since France was only prepared to militarily secure the region of Latium around Rome, the rest of the previous Papal States joined the new Kingdom of Italy in 1860 . Pius IX was the last ruler of the Papal States.

Italian nationalists around Giuseppe Garibaldi tried in 1867 to conquer Rome as well, but this failed due to resistance from papal and French troops, including Swiss foreign regiments or the units made up of Dutch, Belgian and French volunteers that became known as Zouaves . On November 3, 1867, troops of the Papal States led by General Hermann Chancellor and French auxiliary troops defeated Garibaldi's troops near Mentana .

When France withdrew its protective troops, which had been stationed in the Papal State since 1849, in the summer of 1870 during the recess of the First Vatican Council due to the declaration of war against Prussia , Italian troops under King Victor Emanuel II marched into the Papal State almost without a fight, disempowered the Pope politically and proclaimed little later Rome became the capital of Italy.

The status of the Vatican City was initially unclear (so-called " Roman Question "), but de facto the rule of the Catholic Church remained in it, so that from 1870 the ecclesiastical administrative bodies from the rest of the Papal States concentrated in the Vatican City. The Roman question (and with it the position of the Pope and his relationship with Italy) was not clarified until 1929 in the Lateran Treaties with Mussolini . Thereafter, the secular territory of the Roman Church is limited to the Vatican City . As the successor to the Papal States, the Vatican was granted full sovereignty and regained the international status of an independent state.

The papal state as a political unit should above all ensure the independence of the Pope, who ruled with absolutist power. Since this was elected by the College of Cardinals , it was formally an elective monarchy . The popes also relied in their rulership on the papal nobility , from which they themselves often emerged.

In the various cities and provinces of the Papal States, the Pope was represented by the respective bishop as governor. In general, until the constitution of 1847 was passed, only clergymen were able to gain a position within the government and administration of the Papal States.