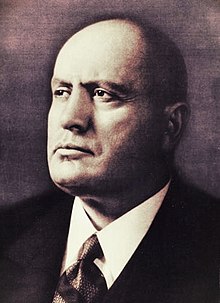 Prime Minister Benito Mussolini , Representative of the Kingdom of Italy

The Lateran Treaties of February 11, 1929, concluded between the Holy See (represented by Cardinal Secretary of State Pietro Gasparri ) and the then Kingdom of Italy (represented by the fascist Prime Minister Benito Mussolini ), finally clarified the so-called Roman question , the status of the Vatican City after the dissolution of the Papal States in 1870. essentially, that recognizes the Pope in the Lateran Pacts, the city of Rome as the seat of the Italian government, while the Italian government's political and territorial sovereignty of Vatican guaranteed. The name of the contracts is derived from the place where they were signed, the Lateran Palace .

After the occupation of Rome by the Italian independence movement (cf. Risorgimento ) on September 20, 1870, among other things, the Papal State was dissolved in order to create the Italian national state. From this point on, the ecclesiastical administration concentrated on Vatican City , where the Pope's de facto sovereignty continued to exist without being legally secured. Pope Pius IX refused the limited sovereign rights offered by the Italian King Vittorio Emanuele II . in May 1871. Pius and his successors were limited in their radius of action to the immediate Vatican City, which was surrounded by fortifications, which, among other things, was repeatedly discussed by Catholic propaganda. From a purely legal point of view, the Pope - and with him the entire Curia  - was before the conclusion of the treaties a normal citizen of Italy, to whom Italy had unilaterally granted certain privileges through the law of guarantees . The status of the papal nuncios abroad was also unclear. In addition, the question arose whether the Vatican could have continued to conclude treaties (especially concordats ) with other countries. A state of limbo, the elimination of which was desirable for all concerned.

This Roman question remained an unresolved issue of conflict between the popes of the time and the Italian monarchy for almost six decades. A solution was first negotiated with the fascist state. Mussolini was interested in a reconciliation with the Catholic Church in order to give legitimacy to the new form of state and society, fascism . Francesco Pacelli, the brother of the later Pope Pius XII. , conducted three months of negotiations with Mussolini, during which all the details of the subsequent treaties were finalized. A total of around 20 text versions were drawn up before the final form of the contract was found. Again and again it was about the exact territorial extent of the papal territory. Among other things, the Vatican was not given access to the sea, but the assurance that retired priests would not be granted access to the public service.

The contract consists of three parts:

In addition, the contract contains in the annex a map of the 44 hectare area of ​​the Vatican City initialed by both partners.

Since the conclusion of the treaties, there have been several additions, such as the submission of additional areas under the sovereignty of the Holy See (including the transmitter of the Vatican radio in Santa Maria di Galeria ).

Another concordat signed on February 18, 1984 revised part of the Lateran Treaties. a. the religious pluralism and the reorganization of state services to priests and church institutions.

The Lateran Treaties ended the open conflict between the Pope and the Italian state and gave the papal territory a legally defined status. In doing so, they gave the Pope the opportunity to intervene actively on the level of international politics, albeit with the stipulation that conflicts should only be mediating. This enabled the Holy See to politically implement its reputation, which had risen during the First World War.

The day of signing, February 11, is celebrated in the Vatican State as a kind of national holiday. Via della Conciliazione between St. Peter's Square and the banks of the Tiber serves as the structural symbol of the treaties .