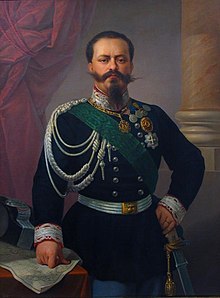 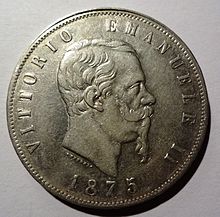 Together with his Prime Minister Camillo Benso von Cavour , Viktor Emanuel led the Italian unification movement ( Risorgimento ), which led to the creation of a united nation state . On March 17, 1861, he assumed the title of King of Italy and ruled the country until his death in 1878.

Viktor Emanuel was born on March 14, 1820 as the eldest son of Prince Karl Albert of Savoy, Duke of Carignan and his wife Archduchess Maria Theresa of Austria-Tuscany . When his reactionary great-uncle Victor Emanuel I , King of Sardinia-Piedmont, was overthrown after a revolt in 1821, the only one-year-old prince was brought to Florence for security reasons . For the next ten years of his childhood he lived at the court of his maternal grandfather, Ferdinand III. from Austria-Tuscany , away from the parents in the care of tutors and educators.

The year 1831 marked a turning point in the life of the young Victor Emanuel, when his father ascended the throne of Sardinia-Piedmont as Charles Albert I and brought his eldest son back to Turin . He was now heir to the throne and was given the title Duke of Savoy . From then on, selected personalities from politics, administration, the military and the church took over the education of the Crown Prince , who showed a solid character early on and was keenly interested in the military and politics.

At the beginning of 1848 a revolution broke out in Paris ( February Revolution 1848 ). The revolutionary fire soon spread to the entire continent, including the northern Italian kingdoms of Sardinia-Piedmont and Lombardo-Veneto , which Austrian rule wanted to shake off. Karl Albert, who was considered a liberal reformer, granted his empire a constitution on March 4, 1848 and openly supported the nationalist revolutionary movement in Lombardy-Veneto, which is why he declared war on Austria . During the First War of Independence that followed , Victor Emmanuel served with the rank of general . He commanded various units in the battles of Pastrengo , Santa Lucia , Goito and Custozza . Despite all the initial military successes, the fortunes of war turned in the late summer of 1848 in favor of the Austrian army, and after the heavy defeat in the Battle of Novara (March 23, 1849), Sardinia-Piedmont had to surrender. The Austrian field marshal Josef Wenzel Radetzky succeeded in suppressing the uprisings in northern Italy and re-establishing the rule of the Habsburgs .

Oath of King Victor Emmanuel II as King of Sardinia 1849

On the day of the defeat of Novara, Charles Albert I abdicated in favor of his eldest son and gave Victor Emanuel the royal dignity . In the presence of the cabinet and his two sons, the defeated monarch signed the deed of abdication and went into exile in Portugal . Viktor Emanuel took on a difficult inheritance and immediately sought to end the fighting with Austria. In the Vignale armistice , he succeeded in persuading the other side to adopt mild terms. Sardinia-Piedmont undertook to pay war indemnity of 75 million francs , while the territorial integrity remained intact.

Domestically, the assertive and strong-willed Viktor Emanuel continued the development of liberalization and modernization that had begun under his father . Much to the delight of liberal circles, he swore his constitutional oath on March 29, 1849 and had the armistice ratified by parliament. To his key ministers (from 1852 Prime Minister ) and personal advisor he made the Count Cavour , the enormous political foresight should prove. Despite a lack of sympathy, which sometimes bordered on personal dislike, the king was convinced of the political abilities of his head of government and held on to him until Cavour's death in 1861. This subsequently implemented an extensive reform program. The separation of church and state was carried out (nationalization of church property, restriction of the influence of Catholic orders), the defeated army was reorganized, the administrative apparatus and the judiciary were modernized. Cavour drove the economic development of the country, which became one of the most progressive states in Europe. 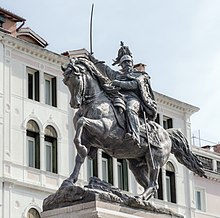 In addition, Viktor Emanuel and Cavour shared the common goal of creating an Italian nation-state . Despite the setback they suffered in 1848/49, the longing of most Italians for a unified nation was unbroken and the hopes of the population rested on the shoulders of Viktor Emanuel, who gradually developed into a symbol of the Risorgimento . At that time one could always say Viva Verdi! hear. What sounds like an homage to the then popular composer Giuseppe Verdi was instead an abbreviation for V ittorio E manuele R e d'I talia (Victor Emanuel King of Italy) . However, the king and prime minister came to the conclusion that the unification of Italy could not be achieved on their own against the military resistance of the great Habsburg power, which is why extensive preparations and the support of foreign powers were required. To this end, the “Italian question” had to be brought before the powers of Europe and first of all made one's own sacrifices. In 1853, Victor Emanuel raised an expeditionary army of 15,000 soldiers to take part in the Crimean War (1853-1856) against Russia on the side of France , Great Britain and the Ottoman Empire . With this step, Sardinia-Piedmont was able to present itself among the great European powers and its army managed to rehabilitate itself. Viktor Emanuel tried to convert the newly gained foreign political weight into a bond with France, which was interested in a decisive weakening of Austria in Europe. The Habsburgs' interests were still opposed to a united Italian nation-state, but now Turin could count on the support of the French Emperor Napoleon III. to hope. As a result of a targeted politico-military provocation in Sardinia, Austrian troops marched into Piedmont in 1859 . Now the conditions of the Sardinian-French secret treaty of Plombières-les-Bains (1858) took effect and France entered the Sardinian War . With combined forces, the Austrian troops could be defeated ( Battle of Magenta , Battle of Solferino ). As a result, the Austrians had to evacuate northern Italy. After the preliminary peace of Villafranca (July 11, 1859), Lombardy fell to Sardinia-Piedmont, which in return ceded the Duchy of Savoy and the County of Nice to France in accordance with the treaty.

This victory gave Italian nationalism new impetus and the central Italian states ( Grand Duchy of Tuscany , Duchy of Modena , Duchy of Parma and Romagna ) voted in plebiscites to join Sardinia-Piedmont. At the same time, Giuseppe Garibaldi and his irregulars succeeded in 1860 in driving the Bourbons out of the southern Italian kingdom of the two Sicilies ( Zug of a Thousand ). At the famous meeting of Teano on October 26, 1860, Garibaldi, basically more of a Democrat and Republican, recognized Viktor Emanuel's sovereignty in southern Italy and thereupon resigned his own claims to power. The originally strong republican-democratic and radical-liberal movements of the Risorgimento were considerably weakened by the failed revolution of 1848/49, so that the constitutional-monarchical principle prevailed in Italy.

This meeting was the decisive step towards the unification of the country. On March 17, 1861, the members of the parliament in Turin announced the birth of the Kingdom of Italy and proclaimed Victor Emmanuel king. However, he kept his name, Victor Emmanuel II, and did not choose a new ruler name, which gave the population the impression that Sardinia-Piedmont had not unified the country, but conquered it.

But with Veneto and the central Italian Papal States, significant territories were still missing to complete the unification of the country. After a secret alliance with the Prussian Prime Minister Otto von Bismarck , the war against Austria broke out again in 1866 ( Third Italian War of Independence ). Although the Italian troops were unsuccessful on the battlefield, Italy annexed Veneto after the Prussian victory of Königgrätz and the Peace of Vienna . Four years later, Victor Emanuel seized the opportunity when Napoleon III. after the outbreak of the Franco-Prussian War withdrew his protection troops from the Papal States , clearing the way for the Italians to march in. On September 20, 1870, Viktor Emanuel's troops occupied Rome almost without a fight and Italy annexed the territory of the Papal States. The following year the king declared the "Eternal City" the new capital and moved into residence in the Palazzo del Quirinale . These measures led to decades of conflict between the House of Savoy and the Holy See , in the course of which Victor Emanuel was even excommunicated by the Pope ( Roman question ). 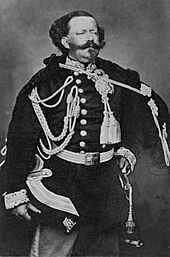 After decades of armed conflict and wars, peace returned at the end of Victor Emanuel's rule, although numerous nationalists claimed the “redemption” of other Italian-settled areas ( irredentism ). These included B. Trentino , South Tyrol , Istria and Dalmatia .

Victor Emanuel, who had succeeded in creating a nation state, enjoyed great popularity among the Italian population, who gave him the nickname "Padre della Patria" (Father of the Fatherland) . Because of his appearance and behavior he was also called "Re Galantuomo" (gentleman-king) .

Viktor Emanuel was a passionate hunter who also pursued his passion intensively in the winter months. As part of a hunting party, the monarch spent a night outdoors at the end of December 1877, but the cold humidity turned out to be fatal for his already sensitive lungs. He caught a cold which in January 1878 turned into fever and chills . Victor Emmanuel II finally died on January 9 at the age of 57.

His eldest son and successor Umberto I did not have him buried in the Basilica of Superga , the traditional burial place of the House of Savoy, but in the Pantheon in Rome. This step was intended to underpin the Kingdom of Italy's claim to Rome as its capital. The tomb subsequently became a place of pilgrimage for hundreds of thousands of Italians from all regions of the country.

Royal coat of arms of the House of Savoy

On April 12, 1842, Viktor Emanuel married his cousin Archduchess Adelheid of Austria , a niece of the Austrian Emperor Franz I, at Stupinigi Castle .

The marriage had eight children:

After Adelheid's death in 1855, Viktor Emanuel married his mistress of many years, Rosa Vercellana, on October 18, 1869 in a morganatic marriage ("left hand", the descendants are excluded from the line of succession). He had two children with her:

He was also the father of the illegitimate daughter: