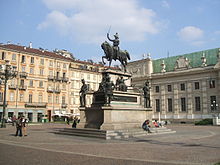 Karl Albert was the son of Karl Emanuel von Savoyen-Carignan and his wife Maria Christina von Sachsen , daughter of Duke Karl von Kurland . In 1800 he succeeded his father in the French and Piedmontese possessions with the title of Prince of Carignan . But until he came of age he was under the tutelage of his mother, who remarried to the Prince of Montléart. He was raised in Dresden , Geneva and later in Paris in an intellectual atmosphere. From 1817 he lived on his estates in Piedmont, where he led the revolution in 1821.

After King Victor Emanuel I of Sardinia abdicated on March 13, 1821 as a result of an uprising of the secret society of the Carbonari , he was temporarily appointed regent by the latter , since the new King Karl Felix , a younger brother of Victor Emanuel I, was still stayed in Modena . Karl Albert, who possibly supported the Carbonari, issued a liberal constitution, which was repealed by Karl Felix after his return. He sent him to Spain , where he was supposed to support the monarchist forces of France and suppress the liberal revolution in order to enable Ferdinand VII to return to the throne. This restored Karl Albert's damaged reputation with the Conservatives .

In 1831 King Karl Felix died childless and Karl Albert succeeded him as a distant cousin on the throne. He initially continued its conservative policy, entered into a military alliance with Austria and suppressed liberal movements. Nevertheless, he carried out a number of reform projects during his reign, created a code of law based on the Code Napoléon , reorganized the military and supported art and science. In 1840 he made contact with moderate liberals and began to turn more and more against Austria.

On March 4, 1848, he approved a constitution that established a constitutional monarchy . After the outbreak of a revolution in the Austrian-ruled Kingdom of Lombardy-Veneto , influenced by Camillo Benso von Cavour , he declared war on Austria on March 23, 1848. After initial successes ( Battle of Goito ), he suffered a defeat in the battle of Custozza near Lake Garda against Count Josef Radetzky and concluded an armistice on August 9, 1848. After an uprising in Tuscany , war broke out again, in which Karl Albert was defeated by Radetzky near Novara on March 23, 1849 . Thereupon Karl Albert decided to abdicate in favor of his son Viktor Emanuel II . On the same evening he traveled to Porto in Portugal , where he died in a monastery in the same year .

On September 30, 1817, he married Maria Theresa of Austria-Tuscany , daughter of Grand Duke Ferdinand III, in Florence . of Tuscany who gave him the children