Camillo Benso Count of Cavour ( Italian Camillo Benso, conte di Cavour [ Kamilo bɛnso konte dikavuːr ] Ausspr. ? / I * 10. August 1810 in Turin ; † 6 June 1861 ) was an Italian statesman and entrepreneur. As Prime Minister of the Kingdom of Sardinia , he promoted Italian unity , was then the architect of the Italian constitution and the first Prime Minister of the new Kingdom of Italy 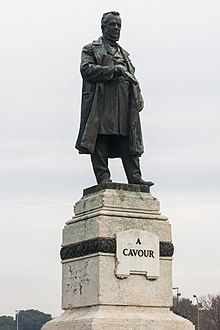 Cavour was born in Turin . At the time of his birth, the city belonged to the French Empire of Napoleon I , until it became the capital of the Kingdom of Sardinia-Piedmont again in 1814 . His father Michele Benso von Cavour was a Francophile Piedmontese nobleman and his mother Adèle de Sellon came from a Calvinist family in Geneva . Cavour spent his childhood and youth in the Palais Cavour in Turin, his mother tongue was French, which he also used throughout his life in private use. In Turin, Cavour attended the Royal Military Academy. He joined the Sardinian-Piedmontese army, where he last held the rank of first lieutenant. However, due to his radical liberal thoughts, he was pressured to leave the army, and so he resigned in 1831. After this military service he traveled through Europe , studying politics and agriculture .

Cavour's studies of governments and his experiences during the July Revolution in France in 1830 reinforced his liberal views. The successfully established constitutional monarchy , with Ludwig Philipp as king, convinced him of the efficiency of such a form of government. Cavour, gripped by the nationalist zeal of the early 19th century, also strove to unite Italy. His studies of agriculture aroused his interest in industrialization and infrastructure in general. He modernized Italy both politically and technologically.

With the election of the liberal Pope Pius IX. In 1846, Cavour saw an opportunity to advocate reforms. In 1847 he founded Il Risorgimento ("The Resurrection", the expression later became synonymous with the unification of Italy), a newspaper which supported liberalism, constitutionalism and the unity of Italy. As an editor, he soon became a powerful figure in Sardinian-Piedmontese politics.

During 1848 there were a number of violent revolutions in Europe. The uprising in the Kingdom of the Two Sicilies also shook the rule of King Karl Albert of Sardinia-Piedmont. Pressured by the influence of Il Risorgimento and the disunity in his empire, on February 8, 1848, he granted Sardinia-Piedmont a Charter of Freedoms. Delighted with this success, Cavour turned to Karl Albert with the request that he declare war on Austria . This determined the politics of a large part of northern and central Italy through dependent small states, the dukes of Parma and Piacenza, of Modena and Reggio as well as the Grand Duke of Tuscany, who himself came from the Habsburg dynasty . A fitting opportunity came on March 19, when the news arrived in Turin that a revolt against the Habsburg rule had broken out in Milan . On March 15, Karl Albert gave in to pressure from Cavour and his party and declared war on Austria.

Although the Sardinian-Piedmontese troops were defeated by the Austrian under the command of Field Marshal Count Josef Wenzel Radetzky von Radetz in the Battle of Novara on March 23, 1849 and Italian revolutionaries were overthrown in Lombardy , Veneto and Milan , liberalism and nationalism remained Italy exist - in the July elections in 1848 Cavour won a seat in the Sardinian Chamber of Deputies - but after the defeat by Austria Karl Albert abdicated in favor of his more liberal and more assertive son Victor Emanuel II . Cavour's political career flourished during his reign. In 1850 he became Minister of Agriculture and Trade and in 1851 Minister of Finance.

After the failure of the revolutions of 1848, Cavour changed his liberal thoughts and decided to give up his idealism in favor of realpolitik . He thought that even if Italy could not be unified through revolution, a strong and calculating rule had a chance. In his first two government offices, he worked hard to strengthen Sardinia-Piedmont. He reorganized the army, the judiciary, the financial system and the bureaucracy. He also drove the development of industry and had factories and railway lines built, so that Sardinia-Piedmont became one of the most modern states in Europe of its time.

In November 1852 Cavour became President of the Council of Ministers of Sardinia. In this office he was able to expand his projects into the field of foreign policy. In 1854, with the outbreak of the Crimean War , he saw an opportunity to strengthen the international position of his nation. Sardinia joined the war in January 1855 as an ally of England and France. In return, these two powers promised to seriously discuss Italy's future internationally. After the war, Cavour used the congress in Paris as an opportunity to denounce the occupation of northern Italy by Austria, which had remained neutral.

Cavour wasn't the only important leader to come to power in 1852 - that same year Napoléon III became. Emperor of the French. He was not averse to Cavour's plans for a unified Italy, and in July 1858 both met in Plombières-les-Bains to discuss Italy's future. At this meeting, Napoleon agreed to protect Sardinia in case Austria attacked it. Cavour immediately set out to provoke Austria to war, and in April 1859 Austria declared war on Sardinia , which led to the Sardinian War . But after very lossy victories at Magenta and Solferino , Napoléon III decided to withdraw from the war with the preliminary peace of Villafranca . This treaty allowed Austria to keep Veneto , and the small states conquered by Sardinia were returned to their previous rulers, while Sardinia at least received Lombardy. Cavour was angry at Napoleon, but the tide soon turned when, in the spring of 1860, as a result of a Sardinian campaign, the citizens of Tuscany , Modena , Parma and Bologna as well as Emilia-Romagna , who were only a tiny minority everywhere, were selected actual population represented, voted in referendums for connection to Sardinia. Napoleon recognized this decision and received the Duchy of Savoy and the County of Nice in return.

Shortly afterwards, the Italian freedom fighter Giuseppe Garibaldi led his famous army of a thousand red-clad adventurers, the Mille , to Sicily in the Kingdom of the Two Sicilies (May 1860), while Victor Emanuel II and his troops advanced into the province of Umbria of the Papal States. After the fall of the two fortresses of Gaeta and Civitella del Tronto in 1861, the electorate of Naples-Sicily and the Papal States voted for a union with Sardinia, whereupon the Kingdom of Italy was proclaimed in March 1861. Cavour's territorial goals were achieved because Italy was united except for Veneto and Rome . When Prime Minister Cavour died two months later, his dream of a united Italy was almost fulfilled. Veneto became part of the kingdom in 1866 as a result of the German War , in which Italy was on the side of Prussia. Rome came to Italy after the departure of the French protection troops on September 20, 1870 and then became the capital; this event is still remembered today. 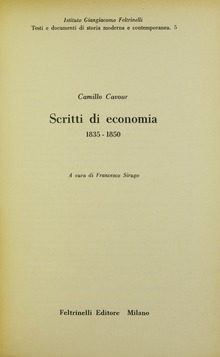