Veneto is a redirect to this article. For other meanings, see Veneto (disambiguation) .

With an area of ​​18,391 km², Veneto is the eighth largest region in Italy and is in fifth place in terms of population with over 4.9 million inhabitants.

The region borders in the east on Friuli-Venezia Giulia , in the north-west on Trentino-South Tyrol , in the west on Lombardy and in the south on Emilia-Romagna . The northern tip of Veneto borders the Austrian federal states of Tyrol ( Lienz district ) and Carinthia ( Hermagor district ). However, there is no direct road connection to Austria.

The northernmost point of the region is the "Cima Vanscuro" or "Pfannspitze" (2678 m above sea level) on the Austrian border, the southernmost point is the "Punta del Mezzanino" on the right side of the mouth of the Po di Goro.

Geomorphologically, Veneto can be divided as follows: 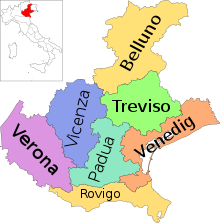 Provinces in Veneto including the metropolitan city of Venice

The region is divided into six provinces and one metropolitan city. The province of Belluno is the largest in terms of area, while the province of Padua is the most populous.

1850 edition of the coat of arms for Lombardy-Veneto

Historically, the region has long been part of the Republic of Venice , whose terraferma , i.e. land ownership, it formed. 1797, the largest part of the territory came after the Treaty of Campo Formio to the Habsburg monarchy . After Austria's defeat by Napoleon in Austerlitz and the Peace of Pressburg , Veneto was added to the Kingdom of Italy , a Napoleonic satellite state , in 1805 ; In 1815 it became by the Congress of Vienna as Kingdom of Lombardy-Venetia back to nunmehrigen Empire of Austria .

After the third war of independence , the region finally became part of Italy in 1866 : Since Prussia, allied with Italy , had defeated Austria in the Battle of Königgrätz , Austria had to give Veneto to France (which was not necessarily neutral, but rather sympathetic to Piedmont) despite its military successes in the south Took on mediating role), which then passed it on to Italy in exchange for Savoy and Nice .

Veneto was a major scene of the First World War. The decisive battle of Vittorio Veneto was fought there in 1918 , after which the Villa Giusti armistice between the Kingdom of Italy and Austria-Hungary was signed near Padua . After the annexation of South Tyrol, the Ladin communities of Cortina d'Ampezzo , Livinallongo and Colle Santa Lucia were added to the Venetian province of Belluno.

Between 1943 and 1945, Veneto was largely part of the Italian Social Republic , the province of Belluno was incorporated into the German foothills of the Alps . Numerous cities were bombed by the Allies. The worst hit was Treviso and Vicenza and the port facilities of Marghera , and Padua and Verona were also the target of the bombing raids.

In 1963 the region was shaken by the Vajont disaster . On October 9, a 270 million ton flank broke loose from Monte Toc. Boulders and stones slid into the Vajont reservoir. 25 million tons of water sloshed over the newly built dam. A 160 meter high tidal wave destroyed five villages in the valley, including the village of Longarone . Almost 2,000 people were killed. It was one of the largest man-made disasters that has ever occurred in Europe.

As a result of the Italian economic miracle ( miracolo economico ), Veneto developed in the 1960s and 1970s from a poor and small-scale region to one of the most industrialized and economically advanced in Italy. Agriculture is mainly practiced in large-scale plantations, and tourism is an important economic factor along the Adriatic coast. Due to the prosperity, there was heavy immigration from other areas of Italy and from abroad (see below), which together with the structural change contributed to the weakening of local traditions. Therefore, in the last few years there have been attempts at autonomy and independence. A distinction must be made between the Lega Nord , which is now the regional president of Veneto and whose goal is the creation of an autonomous “ Padan ” nation in northern and central Italy, and various movements that reject the Padania concept and advocate an autonomous Veneto in its historical Set borders ( Venetian nationalism ).

On November 28, 2012, the Regional Council of Veneto, with 29 votes in favor, two against and five abstentions, obliged the regional government to seek the implementation of the self-determination of the people of Veneto at international level in order to be able to hold a referendum which could eventually lead to the separation from Italy. A referendum organized by a private committee and therefore not legally binding took place from March 16 to 21, 2014. According to the organizers, 2.36 million eligible voters took part in the survey, which took place via the Internet and specially set up polling stations, which corresponds to a participation of 73%. 89% voted for independence and that in the event of independence the Veneto should cling to the EU , the euro and NATO .

On October 22, 2017, a consultative referendum took place on the increased local autonomy of Veneto.

Until the early 1970s, poor Veneto was a real emigration country. Between 1870 and 1970, over 3 million people left the region, mainly heading for Latin America until 1930, and later increasingly for other parts of Italy.

Since industrialization in the course of the 1970s, numerous southern Italians as well as many foreigners, mainly Eastern Europeans, have moved to Veneto, so that as of December 31, 2008, 454,453 foreign nationals (9.30% of the population) were living in the region.

In addition to Italian, most of the inhabitants speak Venetian , which can be regarded as an independent language due to the profound differences to standard Italian . There are also German (Plodarisch) (in Sappada / Sappada) (Friulian) Friulian (in the metropolitan city of Venice) and Ladin in the province of Belluno spoken.

Since the region does not have an autonomous status, the minority languages ​​are hardly maintained. That is why the three old Tyrolean municipalities of Cortina d'Ampezzo / Anpezo, Livinallongo del Col di Lana / Fodom and Colle Santa Lucia / Col voted in a referendum in autumn 2007 for affiliation with the autonomous Trentino-South Tyrol , while Sappada / Plodn voted for the Connection to Friuli Venezia Giulia has pronounced. The Parliament in Rome, which has the last word on these issues, has so far been inactive.

The Cimbrian- language islands in the Seven and Thirteen Parishes have almost died out as a result of the fascist Italianization .

The traditionally conservative and Catholic region was a stronghold of the Italian Christian Democrats for decades. The region has been ruled by center-right alliances since the 1990s.

The memory of Venice's long independence and proud tradition means that autonomist and separatist tendencies are particularly pronounced. The Lega Nord -Liga Veneta is well represented. It provides the mayor in the city of Verona and in numerous medium and small municipalities. In the regional elections on March 28 and 29, 2010, the Lega emerged as the strongest party and, with Luca Zaia, is the first to appoint the region's president.

Veneto is one of the economically strongest regions in Italy, which has undergone a structural change from an agricultural area to an industrial region since the Second World War.

Agriculture still has an important role to play, but large plantation-like farms have taken the place of the numerous small farms. Veneto is an important wine-growing region: Valpolicella and Prosecco wines are produced here. The radicchio is also a typical regional product.

Medium-sized and export-oriented companies along the Milan-Verona-Venice motorway connection ( Autostrada Serenissima ) are the backbone of the region's industry and economy. In the metropolitan city of Venice you can find oil refineries, especially in Porto Marghera, chemical industries and shipyards. The motorcycle and scooter manufacturer Aprilia is based in Noale . The food industry is particularly well represented in the provinces of Verona and Rovigo. Italy's second largest thermoelectric power plant is located in Porto Tolle near Rovigo. Vicenza is a center of goldsmithing . The province of Padua is strong in metal processing. Major companies in the Treviso area include Electrolux and DeLonghi . Luxottica , the world's largest eyewear manufacturer, is based in Agordo (Belluno province) . The fashion industry is strongly represented in the whole region: Benetton , Geox , Diesel and Bottega Veneta are big fashion names from Veneto.

Tourism is a very important branch of the economy : Veneto is Italy's first tourist region, with over 14 million tourists in 2007 (more than 20% of them came from Germany). In addition to Venice , the opera city of Verona and the university city of Padua are popular tourist destinations, as well as the Dolomite town of Cortina d'Ampezzo , the Lake Garda communities of Peschiera , Lazise , Bardolino , Garda and Malcesine , the thermal spa Abano Terme , the seaside resorts of Jesolo , Caorle and Cavallino-Treporti .

In comparison with the GDP of the EU expressed in purchasing power standards, the region achieved an index of 110 (EU-28: 100) (2015). The nominal GDP per capita is € 30,800. In terms of total regional gross domestic product, Veneto ranks third in Italy after Lombardy and Lazio with over € 151 billion. In 2017 the unemployment rate was 6.3% and thus below the national average.

With a value of 0.896, Veneto ranks 7th among the 21 regions and autonomous provinces of Italy in the Human Development Index .

Provinces in the Veneto region