The Kingdom of Italy ( Italian Regno d'Italia ) was established in 1805 as the successor state to the Republic of Italy and existed until 1814. The head of state of the constitutional monarchy was Napoleon Bonaparte as King of Italy. 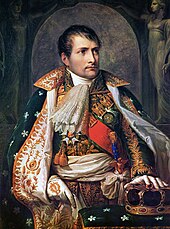 Napoléon Bonaparte as King of Italy

The Iron Crown of the Lombards

With the victory of Marengo in 1800, Napoleon regained Italy, which had previously been lost. In the Treaty of Lunéville , Austria had to recognize the Cisalpine Republic (since 1802 Italian Republic) in 1801 .

After the establishment of the French Empire, Napoleon converted the Republic of Italy into a kingdom. Emblematically, he was crowned king with the Iron Crown of the Lombards on May 26, 1805 in the Milan Cathedral - like the head of the Holy Roman Empire in earlier times. Napoleon was thus Emperor of the French and King of Italy in personal union. He made his stepson Eugène de Beauharnais viceroy and in 1807 heir to the throne.

The republican constitution of 1802 was reformed by several laws. This included that the royal dignity should remain hereditary in the descendants of Napoleon. However, according to him, the crowns of France and Italy should no longer be worn by one person. Napoleon also determined that the future kings would rule Italy.

In 1805 the Order of the Iron Crown was donated as a state award with the King as Grand Master.

Napoleon pursued a policy of state unification of Italy, but large parts of north-west Italy (Piedmont, Liguria, Parma) fell to the French Empire, and in the south the Kingdom of Naples remained independent. The territory of the Kingdom of Italy comprised the mostly formerly Austrian areas in northern Italy and parts of east-central Italy.

In the Peace of Pressburg in December 1805, Austria also had to cede Veneto , Dalmatia and Istria to the Kingdom of Italy. Between 1807 and 1808 the Papal States and Tuscany were annexed, not annexed to the Kingdom of Italy, but to France. Parts of the secularized papal state (provinces Urbino, Ancona, Macerata) were integrated into the kingdom. After France's renewed victory over Austria in the war of 1809 , further areas (South Tyrol) were added. However, in 1809, Dalmatia and Istria became part of the French Illyrian Provinces . 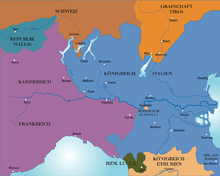 Northern and Central Italy in 1806

From 1810 the kingdom then comprised 24 departments with a combined population of around 6 million.

Army of the Kingdom of Italy

Parade of the army of the Kingdom of Italy in front of Eugène de Beauharnais in Milan on February 18, 1812

As a satellite state of France, the kingdom had to make cash payments and provide soldiers, workers and warships. The viceroy was also the commander of the royal Italian army. This took part in the following campaigns of the emperor. During this time it provided a total of 218,000 men.

Over 80,000 Italians fought alongside Napoleon in Russia during the Russian campaign , but only 50,000 of them were in the armies of the Kingdom of Italy and the Kingdom of Naples , the rest in French units. Most did not return.

Inside, Napoleon or his governor continued the modernization policy from the era of the republic. Between 1806 and 1810, in addition to the Civil Code (Code Napoléon), the other French codes were also introduced. This unified the kingdom's legal system. In addition, the administration was modernized and the prerogatives of the clergy were abolished. Remnants of feudalism were also abolished. Labor and serfdom were abolished without compensation. The constitution was based closely on that of the French Empire. It was shaped by a strong executive.

New elites emerged in the army and administration. The creation of large “imperial fiefdoms” in 1806 was intended to promote loyalty to the regime. Associated with this was a title of nobility and monetary payments, but not direct political power. The sale of state property, mostly former spiritual possessions, has also contributed to the emergence of new social classes.

In many ways, the Italian Republic and Kingdom of Italy anticipated the developments of the later Risorgimento . However, the country was completely under French control. After the legislative assembly dared to reduce taxes in 1805, it was dissolved and never convened again.

At the same time, the country was obliged to support Napoleon's economic policy, in particular the continental blockade. English products were not allowed to be imported. On the other hand, French products had to be granted preferential tariffs. While the Continental Barrier has harmed some industries, other areas such as linen making, mining, and weapons manufacturing have been less affected. Overall, this period was important for the development of a modern Italian bourgeoisie . 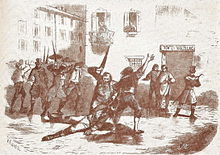 Eugène de Beauharnais tried in view of the looming defeat of Napoleon since 1812, also pushed by leading Italian politicians, to break away from the close ties to France. He could hope that the Allies would recognize him as king. Talleyrand , who had betrayed Napoleon and conspired with the Allies, had only proposed a Grand Duchy of Genoa for Beauharnais . Ultimately, Beauharnais remained loyal to the emperor and raised new soldiers. When the Austrians advanced, he withdrew behind the Adige. On April 16, 1814, an armistice was agreed. From Beauharnais' side, this also contained the wish for an Italian state. With the treaty the withdrawal of the French troops was agreed. They were to be replaced by the units of the Kingdom of Italy. Naples King Murat occupied the Marks of Ancona and Rimini, but otherwise did little to support Beauharnais. The Austrians pushed on, occupied Lombardy and Florence. An uprising broke out in Milan on April 20, in the course of which Giuseppe Prina, the finance minister of the Kingdom of Italy, was murdered. Shortly afterwards, Austrian troops also moved there. The Milan insurgents hoped in vain for British support for an independent Italian state. With the Congress of Vienna , only briefly interrupted by the rule of the Hundred Days , the Napoleonic reorganization of Italy ended. Instead, Austrian interests dominated Italy. A large part of the territory of the Kingdom of Italy was the the Empire of Austria is part of Kingdom of Lombardy-Venetia . Some achievements from Napoleonic rule such as the Code Napoléon were carried over.

In contrast to Viceroy Beauhairnais, the King of Naples, who was still appointed by Napoleon, Joachim Murat , was able to save his throne in 1814 even after the fall of the emperor. During the reign of the Hundred Days in 1815 he started a war against Austria and the Papal States in order to become king of all Italy himself. He hoped in vain for 40,000 dismissed and dissatisfied soldiers from the dissolved Kingdom of Italy and finally lost his throne and life.

After the French July Revolution of 1830 , there were also uprisings and attempts at overthrowing in central Italy (e.g. in Romagna) in 1830, in which the Napoleonids Napoléon Louis Bonaparte and the later Emperor Napoleon III. were involved. French troops occupied again in 1832 z. B. Ancona (until 1838), but this time to suppress the revolution and national movement.