The title of this article is ambiguous. Further meanings are listed under Trient (disambiguation) .

Trento ( Italian Trento , trentinisch Trent , Ladin Trent , Mocheno Trea't , Cimbrian Tria ) is the capital of Trentino and the autonomous region of Trentino-Alto Adige , which located at the northernmost administrative region of Italy . The village is the third largest city in the Alps with 118,902 inhabitants. Its center is at an altitude of 194 m. The municipality extends over an area of ​​158 km². The place is the seat of the Archdiocese of Trento and the University of Trento with about 16,000 students.

The city is surrounded by mountains in the Adige river valley , 55 km south of Bolzano and 100 km north of Verona .

Three districts form the actual city and are in turn divided into districts , the rest are incorporated suburbs .

The Adige Valley was already settled in prehistory and formed an important transport route. A system of paths already existed in the Raetian times . The Romans partially transformed the Rhaetian routes into paved roads that were helpful in conquering and developing the alpine regions. 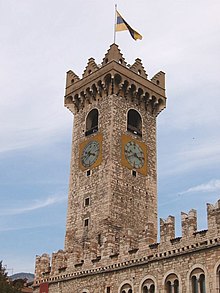 Trento with the Paganella (2125 m) and the Brenta group

Trento was founded by the Celts and later conquered by the Romans . They called it Tridentum ("three teeth"), based on the old Celtic name Trent, Furt (Italian Trento then came back to the original name). After the fall of the Western Roman Empire in 476, the city fell under different dominions until Henry II , Emperor of the Holy Roman Empire from 1014 , decided in 1004 to transfer secular power to the bishops ( Hochstift Trento ). The seal placed by Konrad the Salier in 1027 opened a new chapter in the history of Trent, in which the city was to assert itself for over eight centuries.

From the 6th century, what would later become Tyrol as far as Bolzano belonged to the Duchy of Bavaria , and from 955 also the former Lombard part of today's Trentino to the south of it. The Bavarian- Longobard border was immediately southwest of Bolzano . Salurn and the area to the right of the Adige, including Eppan , and Kaltern to Falschauer in Lana , became Lombard. The area to the left of the Adige and the Fassa Valley became Bavarian and Christianized by the bishops of Brixen and Trento. The borderline remained unchanged during the Carolingian and Ottonian times, although the Bavarian settlement also advanced in the Longobard part to Salurn.

In the course of the 12th century, the Counts of Tyrol , a Bavarian noble family, succeeded in creating their own territory with Trento and Brixen in the southern part of the duchy starting from Tyrol Castle near Merano and the Vinschgau with the County of Tyrol and during the 13th century the imperial time to be recognized.

In 1407 there was a revolution in Trento. Nobles and citizens of the city, led by Rodolfo Belenzani , rose up against Bishop George I of Liechtenstein (1390-1419). At the same time there were peasant uprisings in other parts of the Principality of Trento, so that Duke Friedrich turned against the bishop with an empty pocket and drove him out of Trento. 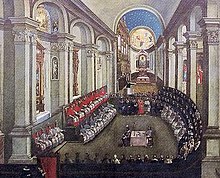 The historical importance of the city is mainly due to the Council of Trento , which took place from 1545 to 1563 and was the starting point of the Counter Reformation . During this time, parts of the city were redesigned in the Renaissance style . Trento was the seat of the prince-bishops , who also exercised secular power. At the beginning of the 17th century, the city experienced another significant architectural style with the baroque .

In the Italian campaign of Napoleon Bonaparte during the First Coalition War , the city was conquered twice by French troops in autumn 1796 and spring 1797, after it had already been besieged in vain by the French under General Vendôme in 1703 during the War of the Spanish Succession . The rule of the prince-bishops and thus of the prince-bishopric of Trento finally ended with the secularization of the spiritual principalities of the Holy Roman Empire as decided in the Imperial Deputation Principles of 1803 . With the Peace of Pressburg , Trento became Bavarian at the end of 1805; It belonged to the Kingdom of Bavaria , founded in 1806, until 1810 and from 1808 was the capital of the Bavarian Etsch district . The Treaty of Schönbrunn , concluded in 1809, brought Trento to the Kingdom of Italy, which existed until 1814, in 1810 . After that, the area of ​​the former prince-bishopric became part of the Austrian Empire , later Austria-Hungary . Trento became the seat of the governor's department for Welschtirol . In the 19th century, with the implementation of technical works such as the laying of the Etsch in 1858 and the construction of the Brenner Railway in 1859, modern urban development began, with state administration palaces and large hotels. Before it was straightened, the Adige ran through the entire northern part of the city in many turns.

After the loss of Lombardy and Veneto and the fortress quadrangle Mantua - Peschiera - Verona - Legnano , the Austro-Hungarian southern border was unprotected. Therefore, the expansion of the city into a fortress began in the early 1870s. In anticipation of a possible Italian military attack, which actually happened in the First World War from 1915 to 1918, Austria-Hungary again massively strengthened and expanded the facilities of the Trento fortress in the city and the surrounding area from 1914 : fortifications with armored towers, cave fortresses and extensive trench systems. Even if Trento was never involved in combat operations, large parts of the civilian population had been evacuated after the Italian declaration of war on May 23, 1915. During the First World War, Trento was a stage . The most significant event during this time was the execution of the Austrian deputy and irredentist Cesare Battisti , who came from Trento, on July 12, 1916, together with Fabio Filzi, who was captured with him, in the moat of Castel Buonconsiglio. The First World War ended in Trento with the invasion of Italian troops on November 3, 1918.

After the First World War, the city and Trentino fell to the Kingdom of Italy through the Treaty of Saint-Germain . After Mussolini was deposed and liberated in 1943, the province of Trento, together with the neighboring provinces of South Tyrol and Belluno, became part of the fascist republic of Salò , and until the beginning of May 1945, militarily, became part of the German foothills of the Alps . On the day the Wehrmacht announced the surrender in Northern Italy, on May 2, 1945, Trento was bombed by the Allies.

Both the city and the entire region have enjoyed steady economic growth since the 1950s. Today, Trentino is one of the wealthiest regions in Italy. The province of Trento, like South Tyrol, enjoys extensive autonomy.

The Italian-German Historical Institute is also located in the city .

1 About 8,000 inhabitants are assumed for the time of the Council (mid-16th century).

Trento itself and also individual districts of the city maintain numerous city partnerships with other European countries.
The city names as partners:

Palazzo Pretorio to the left of the cathedral

The main cultural institutions and sights in Trento are:

On the other (right) side of the Adige : 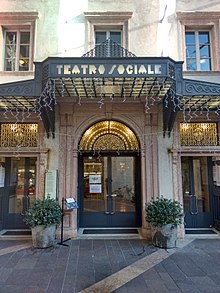 Romano Prodi at the business festival

The economic festival (Festival dell'Economia di Trento) was launched in 2006 to facilitate and facilitate dialogue between economists and the general public. The primary goal was to make the language and terms of business understandable for everyone. The festival takes place every year towards the end of May in historical palazzi in the old town of Trento.

Big names in the business world explain and interpret current economic issues - from an economic as well as a social and entrepreneurial perspective. Numerous business scholars and managers have been guests over the past few years, including Sir Anthony Atkinson , Zygmunt Bauman and Nobel Prize winner Gary Becker .

Business faculty of the University of Trento

The University of Trento has placed since its inception in 1962, great importance to the development of a network of Italian and foreign institutions and organizations. In 1982, the Free University of Trento became a state university, which had a statute that guaranteed autonomy and personal responsibility.

More than 16,000 people are currently studying at the University of Trento, who are supervised by around 600 university lecturers, researchers, technicians and administrative staff. The university also has a branch in Rovereto .

Trento is on the A22 Brenner motorway , which connects Verona , Bolzano , Innsbruck and Munich .

The Brenner Railway runs through the city. Trento is also the starting point for the Trento – Malè – Mezzana narrow-gauge railway to Mezzana and the Valsugana railway to Venice .

Near Mattarello, around five kilometers south of the city center, there is Trento Airport , which is used for general aviation .

The Etsch cycle path leads through Trento, as does the Via Claudia Augusta as a modern long-distance cycle path along an ancient Roman route. 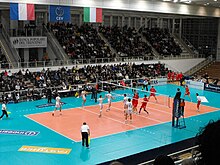 Wikisource: Trient in the appendix of the Topographia Austriacarum (Matthäus Merian)  - sources and full texts

Municipalities in the Autonomous Province of Trento