This article covers the city of Schwaz in Austria; for the municipality of the same name in Bohemia see Světec . For the German portrait painter see Hans Maler zu Schwaz

Schwaz is a district capital with 13,791 inhabitants (as of January 1, 2020) in the state of Tyrol in Austria . The community is located in the judicial district of Schwaz .

The district capital Schwaz is located in the middle Lower Inn Valley about 30 km east of the provincial capital Innsbruck at the foot of the Kellerjoch ( local mountain and panoramic mountain , 2344  m ) and the Eiblschrofen .

The municipality extends over an area of ​​20.17 km². The settlement has been determined for centuries by the Lahnbach , which built up the local rubble cone through the transport of gravel and floods and divides the city into the market and village areas . At the same time, there is a subdivision into the geographical settlement areas of Ried, Pirchanger, Bleiberg, Ost, Sonnseite, Surheim and Falkenstein.

Around 1170, the Fruntsbergers (later Freundsbergers) built a simple residential tower on the hill above Schwaz, which they expanded into Freundsberg Castle in the 13th century . The first bridge over the Inn was built in the 14th century .

The townscape was initially of a rural character, but after the discovery of the silver and copper deposits it soon advanced to metropolitan dimensions. As early as the Bronze Age, copper was mined in the mountains between Schwaz and Kitzbühel , which, in combination with tin , was needed for the production of bronze . At the heyday of mining in the 15th and 16th centuries, Schwaz was the largest mining metropolis in Europe with 20,000 inhabitants (around 13,000 today) and the second largest town in the Habsburg Empire after Vienna . 85 percent of the worldwide silver mining of the then known world takes place in Schwaz. With the takeover of the ore mines in Tyrol, Fugger's share in the global copper trade volume increased from 40 to 80 percent.

According to an unconfirmed legend, silver mining in the Schwaz silver mine began in 1409, when the maid Gertraud Kandlerin is said to have discovered a stone containing silver ore while grazing a bull on the Kogelmoos (area above the village). Around 1420, rich ore mines were opened on the Falkenstein for the first time, and the immigration of skilled miners from Bohemia and Saxony began. Within a few years, metal production in Schwaz became a European economic factor, and the Falkenstein became a source of silver and money for the Habsburgs. The Augsburg trading families Fugger and Paumgartner were present during the silver mining period. The doctor Paracelsus ( Philipp Aureol Theophrast Bombast von Hohenheim in Egg an der Sihl ) also visited Schwaz twice (1516 and 1533/1534) on his research trips to deal with mining diseases and probably received information from the Schwaz doctor Johannes Milchtaler.

The decline of the silver age in Schwaz began with the import of cheap silver from American opencast mines .

In 1558 Georg Rösch von Geroldshausen wrote the following rhyme about the "mother of all mines" :

Schwaz is the mother of all mines.
A very large crowd [of people] thirty thousand feed on it
, if I am right [I remember correctly]
men, women, young and old.

From 1521 the Swiss Protestant theologian Jacob Strauss (1480–1530) worked as a preacher in Hall and Schwaz and had a large audience. In his Reformation sermons he criticized Catholic teachings and condemned interest and usury. The bishop of Brixen was able to cause that he had to flee Tyrol, even though a majority had become Protestant. Only the Franciscan monastery formed the last Catholic bulwark in the place. In the parish church of the Assumption of Mary, on the other hand, the wooden partition also created a religious division: on the one hand, citizens celebrated the Latin mass, on the other, miners celebrated the German Lutheran service .

In 1525 the miners joined the peasant revolts, which were suppressed and condemned by the German reformer Martin Luther . After that, the non-violent Anabaptist movement became very popular. Jakob Hutter (1500–1536) was one of the charismatic leaders, and he moved through the Pustertal , where he founded several Anabaptist churches that practiced the baptism of confession and community of property . As " heretics " they were persecuted by both Protestants and Catholics. Around 500 Anabaptists were executed in Schwaz, Rattenberg and Brixlegg , and others were expelled from the country.

With the beginning of the Counter Reformation from 1575, the Catholic creed became mandatory again; those who wanted to remain evangelical had to live their faith in secret or emigrate. It was not until Emperor Joseph II's 1781 patent of tolerance that Protestant congregations could be re-established. Protestant Christians from the Zillertal were still forced into exile in 1837 . In 2017, only about 230 Protestant Christians lived in Schwaz, who made up 0.7 percent of the population.

After the decline of mining and the destruction of large parts of the place in the Napoleonic Wars , an upswing was initiated in the 19th century by the following institutions:

On September 16, 1899, Schwaz was elevated to the status of a city by Emperor Franz Joseph I by resolution of April 28 . This late elevation is due to the fact that Schwaz never had a city ​​wall despite and because of its size . For the same reason, at the time of the silver mining under Emperor Maximilian I, the mint was not on site, but in the fortified hall , about 17 kilometers west of Schwaz.

Memorial plaque for the victims of the Nazi regime

Until the First World War , Schwaz was a garrison town of the Austro-Hungarian Army ; in 1914 the III. Battalion of the Salzburg Infantry Regiment Archduke Rainer No. 59 .

On July 10, 1999, there was a rock fall from the Eiblschrofen. After that, the movement of the mountain has been for many years means placed GPS - sensors measured. Armored bars and a dam were built to protect settlement areas. The silver forest is now a biotope and recreation area.

In 2017 Schwaz was awarded the honorary title of “ European Reformation City ” by the Community of Evangelical Churches in Europe .

In August 2017 Schwaz was the second Tyrolean municipality to be awarded the title “ Fair Trade City ”.

Left the tower of the parish church, right the cemetery tower

Museum of the Peoples 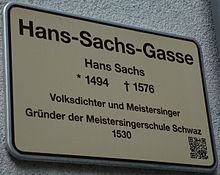 Cities and municipalities in the Schwaz district