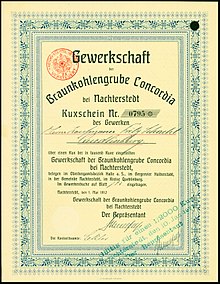 Kuxschein from the trade union of the Concordia lignite mine on May 1, 1912

A union in the sense of mining law was a corporation .

From the cooperative amalgamation of several miners to jointly operate a mine, corporations developed in the late Middle Ages with a fixed number of shares. As a rule, 128 kuxe were spent on a union . In contrast to shareholders, the trade union owners not only received the share of the yield due to them , but they were also obliged to make additional payments , i.e. they were obliged to make additional payments if the union needed capital.

Decisions concerned the all Mitgewerken, a trades or could Lehnträger not meet alone, but only the trades meeting . In the case of a larger number of Kux owners, trade union boards were usually formed that had authority to act. Their formation was prescribed in later mining law.

In contrast to the union pits, there were also self-leaning pits . This meant that the leaning supporter built for his own account and did not spend any kuxe.

In the Holy Roman Empire there were numerous forerunners of this ancient form of corporation ; in the territorial history as the imperial city of Goslar or Katzenelnbogen are examples of this: Where the miners was capable were, as in the silver mining of Goslar, they were at the same time Anteiler (their legal relationship resembled so, for example, the early forms of ". Partenreederei " in whaling ). 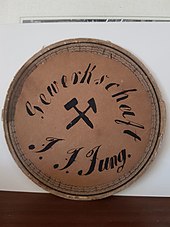 Unions under the Prussian mining law of 1864 operated the mining of mineral resources ( coal , ore , salt , crude oil , peat , minerals , natural stone ) and resembled today's “ stock corporation with registered shares with restricted transferability ”: Trades could not sell their kuxe without the consent of the other trades. Kuxes were difficult to trade, but before the Second World War there was a kux exchange in Essen . Legal supervision was exercised by the mining offices and senior mining offices.

Up to the 20th century, companies in this legal form existed apart from the mining of mineral resources, but they may all have developed from originally mining-oriented corporate purposes.

When today's Federal Mining Act came into force on January 1, 1982, it was stipulated that all unions under mining law that were still in existence were to be dissolved or converted into other forms of company by the end of 1994 at the latest.