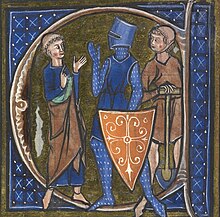 The medieval and early modern society of Europe was divided into several classes ( Latin statūs singular status ), also called birth classes . Estates are social groups that are clearly separated from each other by legal provisions (privileges or disadvantages), such as the plebeians and patricians in ancient Rome. The class system developed during the Carolingian era from the early medieval rank society based on the example of the Roman Empire.

The class system was a model of social order, just as the social classes described by Marx and the social strata introduced by Theodor Geiger into social theory became for later times . However, social mobility was still low in the class structure. Class boundaries existed mainly due to different origins.

In ideological recourse to the estates, various anti-liberal theorists and regimes of the 20th century, predominantly against a Catholic background, strived for the “estates”, ie. H. corporatist reorganization of contemporary states and societies; see. see the article on the corporate state .

Classifications of the class system

The simplest idea differentiated only between authorities and subjects . The same person could be in their relations with different members of class society at the same time as authority and subject. The nobleman, for example, was the master of the peasants in his manor and was also subject to the king. 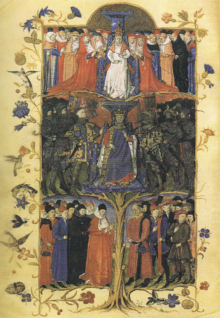 Medieval estates, designed for the church in the 15th century (first half)

The three-tier system, which was particularly characteristic of France, was widespread:

A more detailed breakdown of the three main stands was common in almost all European countries. The position of the individual depended on various factors:

At the top of the pyramid of estates stood the emperor or king and after him the princes , with the clergy the pope and after him the bishops . In the third estate, on the other hand, the large majority of the population was gathered, who had no or only very limited rights to rule (for example over the servants ).

The order of the estates in the Pronostacio of the astrologer Johannes Lichtenberger , published in 1488 : Jesus Christ assigns their tasks to the three estates: Tu supplex ora (“you pray humbly!”) To the clergy, Tu protege (“you protect!”) To emperors and princes, Tuque labora (“and you work!”) To the farmers.

The class system was seen by the people of the Middle Ages and early modern times as a fixed, God-given order in which everyone had his unchangeable place. For the nobility and the third estate, everyone initially took over his father's estate. Switching between stands was not impossible, but rarely in practice. Earnings or wealth had little influence on class affiliation. For example, a citizen who had made a lot of money as a merchant could be much wealthier than a poor nobleman. The class system is a static model of society. In medieval theory, the three main estates were assigned specific tasks. The first estate had to take care of the salvation of the soul, the second estate was supposed to defend the clergy and the people against enemies, the task of the third estate was work. In accordance with one's position in society, one had to work towards a befitting lifestyle. This also included, for example, that every stand was subject to certain medieval dress codes.

The limited social mobility of the premodern class society did not mean, however, that a person was born into a class and had to remain in it: in principle, even with nobility status it was possible to acquire or lose it. A person could also belong to several classes at the same time or appear in different situations as a representative of different classes. Both are particularly true of the scholarly class into which one could not be born, but which one entered through training and the activity as an author. In these points, the European estates differ significantly, for example from the Indian caste system, with which it is sometimes equated.

Development since the late Middle Ages 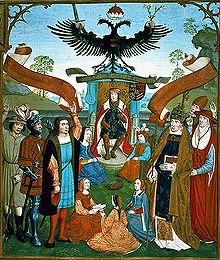 Symbolic representation of the emperor as the head of the corporate order: the secular and clerical classes (including the pope) pay homage to Emperor Maximilian I. From: Liber missarum der Margarethe von Österreich, by Petrus Almaire (around 1515). 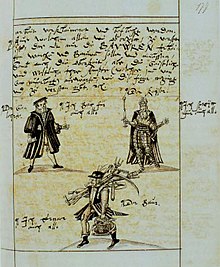 In practice, therefore, the class system - especially since the late Middle Ages and in the early modern period - was not quite as impermeable as it was as a theoretical construct. Even before that, the path to the clergy was an important exception. Even the sons of farmers and craftsmen could occasionally rise to the rank of bishop. Later, especially since the 14th century, it gradually became the practice for the princes to promote the formation of the official nobility , that is, to appoint members of the third estate to a special office and to reward them with a title of nobility . Even within the three main estates, advancement was not uncommon in early modern times, for example by acquiring citizenship of a city. Education could also open the way over the social barriers. A law graduate who was employed by a local authority as a town clerk often found entry into the group of citizens who were eligible for advice. Likewise, to a limited extent, the clergy could represent a channel of ascension. The descent from the birth status could take place if, for example, as a nobleman, for financial reasons, one was no longer able to lead a befitting lifestyle.

The diversification of the class system and the increasing permeability of class barriers were due to the advancing differentiation of society. For many new functions and offices, the original medieval class structure had no right place. Nevertheless, the corporate model of society was never fundamentally questioned until the 18th century. The Church also held on to it. When Martin Luther wrote about the freedom of the Christian , he restricted it exclusively to the relationship of the individual to God. In earthly life, on the other hand, everyone has to remain in his place in the status quo without rebelling.

Nevertheless, one can recognize certain modifications within the traditional class scheme in Luther's theory of three classes. Due to Luther's strict separation of the spiritual from the secular kingdom ( doctrine of the two kingdoms ), the old question of who had supremacy in the secular area (emperor or pope) was clearly decided for emperors and princes. The third estate was now primarily defined as a household , within which the head of the house ruled over the other members of the household. Luther and his successors no longer defined the subordinate relationships within the scheme between the three estates, but moved them into the three main estates: In the ecclesia (church) the preachers faced the community, in the politia (secular government) the authorities faced the subjects and in the oeconomia (household) the parents to the children and the servants. Since Protestant clergymen were supposed to be married too, they were now also in the household . In this way, all people were located in all three classes at the same time, which are therefore also referred to as genera vitae (areas of life). In theory, the three stands were arranged next to each other and no longer one below the other. In reality, however, the power relations were not affected. The third estate remained (in contradiction to the theoretical model) at the same time also the subject.

In the medieval and early modern estates, in contrast to the absolutist systems that emerged later, the privileged estates had political say and powers.

In contrast to the democratic state, not all of the country's residents were entitled to political participation in the corporate community , but only those who performed certain services or had certain privileges. The representatives of the country were not elected, but sat in the state parliament because of their birth (the nobility) or through an office (e.g. abbots) . These estates did not represent their subjects there, but spoke for themselves. Those who owned the estates had the right to appear in the diet in person. Basically, it was a dualistic system in which the totality of the estates - also called the landscape - and the sovereign faced each other. The claim to autonomy as a class or person of status, which was nourished by the consciousness of a class that it possessed its rights from birth (i.e. from its own right), was increasingly formulated with the insistence of class liberty at the beginning of modern times .

The structure of these estates and their powers have historically been different from one country to another, and they have changed over time. Depending on the situation, different classes were politically justified and represented in the state parliament. Almost always the nobility was there, which was often divided into lords and knights (gentlemen and knights). The high clergy were usually considered to be the first among the political classes, although this place was occasionally contested by the gentlemen. The cities often set up their own booth. Rarely were rural communities represented in the state parliaments as a politically justified state (for example the valleys and courts in Tyrol). The various groups of estates formed their own curia in the state parliaments. The acquisition of the estate was heavily regulated. Most of the time, the estates themselves set the conditions for accepting new members; in some places the prince was also involved. Politically, the sovereign did not belong to the estates.

Votes in the state parliament took place almost everywhere according to curia. That is, first you reached an agreement within your own class - the majority principle was usually applied - then you compared the votes of the individual classes. A state parliament resolution came about when the curiae unanimously achieved a resolution. Only a few countries also applied the majority principle here. The ranks had to decide primarily about tax permits, in many places also about internal matters.

In addition to participating in the state parliaments, the stands also managed to reserve important offices exclusively for their members. Above all, the financial administration of the country was in the hands of the estates for a long time before it could be taken over by the princes striving for absolute power.

The height of estate power in most European countries was in the period from the 15th to the 17th centuries. In some territories that had become Protestant, the monasteries and monasteries disappeared from the class system in the course of the 16th century, in others (for example in Württemberg and the Kingdom of Hanover ) Protestant prelates exercised the rights of their Catholic predecessors.

In the late Middle Ages, the Burgundian Netherlands, with its rich provinces and financially strong cities, especially the Flemish cities of Ghent , Bruges and Ypres , was one of the richest countries in Europe. The sovereigns had to grant the provinces and cities extensive freedoms and privileges and could not arbitrarily exercise their monopoly of force . The exercise of some sovereign rights depended on the consent of the estates . In the Burgundian Netherlands, these were made up of the clergy, i.e. the bishops and abbots of the Catholic Church , the nobility and the cities. Without the consent of the assembly of the representatives of the estates, the States General , the sovereigns could not write taxes or call teams to war. While the princes had to convene the Estates General to obtain their consent for their wars or for other purposes, the representatives of the Estates often demanded new privileges or freedoms from them in return. For example, the Burgundian Duke Philip the Good showed the provinces of Holland and Zealand in this way when they helped him with soldiers against the rebellious city of Ghent in 1452.

In Switzerland, the cantons were referred to as estates (their parliamentary representation is still called the Council of States ), in the Netherlands the provinces. The nobility and clergy had disappeared as political classes. Landscapes with an estate constitution still exist in Lower Saxony today.

In the countries of the Iberian Peninsula, the assemblies of the political estates were called Cortes .