The cloth hall with the included belfry

Baldwin II the Bald (879–918) fortified Ypres , which belongs to the county of Flanders, to defend itself against the Normans . In the late Middle Ages, Ypres, along with Ghent and Bruges, was one of the most important cities in Flanders, was a member of the Flemish Hanseatic League and became important in particular through the cloth trade . Around the year 1300 Ypres had about 20,000 inhabitants. Shortly thereafter, the doctor and author of a surgical textbook Jan Yperman was a jury surgeon of the city and worked at the Belle-Siechenhaus. From 1559 to 1801 Ypres was the seat of a bishopric .

On November 4, 1914, the German General Berthold von Deimling had the famous medieval cloth halls of Ypres laid in ruins for no military reason and against the express instructions of his Commander-in-Chief, Crown Prince Rupprecht of Bavaria .

German troops tried several times to take the city; in the process they were repulsed (November 1914 and April 1915). On April 22, 1915, German troops used chlorine gas for the first time .

“London, April 27th. "Daily Chronicle" reports the following details from northern France about the use of poisonous gases by the Germans: On 22nd d. M. at 5 o'clock in the afternoon saw French soldiers in the foremost trenches between Langemarck and Knocks [= Fort Knokke ] thick yellow smoke rising from the German trenches and slowly moving towards the French positions. The northeast wind caused the smoke to spread like a carpet over the earth, which it covered at a height of 16 feet. The Germans used strong cylinders of compressed gas, tapped and opened as soon as the wind hit the enemy trenches. The use of gases came as a surprise to the French. Many of them were poisoned and died. Some managed to escape, but shortly afterwards their faces turned black, coughed up blood, and fell dead. The effects of the gas were noticed at the front at a width of six kilometers and a depth of two kilometers. Fifteen minutes later, the Germans advanced out of the trenches, soldiers in safety helmets leading the way to make sure they could breathe the air. Since the gas was now spreading, large crowds of Germans moved forward. "

On July 12, 1917, German troops - again near Ypres - tested mustard gas for the first time . It was also called yperite by many soldiers. "Yperite" is still a synonym for "poison gas" in France.

The city was held by the Allies until the end of the "Great War" ; soldiers from the British Empire fought in Ypres . To commemorate those who were buried there and the fact that Ypres was the only city in the country to withstand German occupation, The Last Post has been sounding every evening at the Menenpoort memorial at eight o'clock sharp since 1929 - with the exception of the time of German occupation during World War II .

After the war, the heavily destroyed city was partly rebuilt true to the original, partly freely historicizing . Historical awareness and memories have since had a lot of place in the history and culture of the city. There are numerous military cemeteries in the vicinity of Ypres .

Ypres itself is criss-crossed by a gigantic network of caves, which were created by workers during the First World War and in parts only rediscovered in 2009.

During the Second World War , heavy fighting took place again in the area around Ypres during the German campaign in the west . Due to the retreat of the British Expeditionary Force to Dunkirk and the capitulation of the Belgian army on May 28, 1940, it was taken without a fight by Wehrmacht troops the following day . After the capture, the city and the surrounding battlefields of the First World War were visited by Adolf Hitler on a propaganda trip in early June, still during the Battle of Dunkirk . 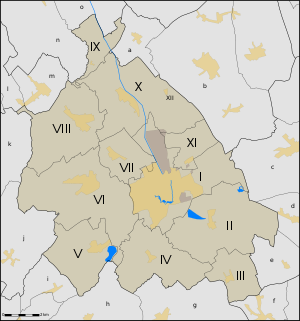 The city lives from trade and tourism. In addition, small and medium-sized industrial companies have settled in Ypres.