The title of this article is ambiguous. Further meanings are listed under Ostend (disambiguation) .
lb le ls lh

Ostend ( Dutch Oostende , French Ostend ) is a port city and a seaside resort on the Belgian North Sea coast in the province of West Flanders with 71,494 inhabitants (as of January 1, 2019).

Ostend is at the former eastern end of the former island of Testerep . This is where their name comes from.

Achieved historic importance of the city during as the Eighty Years War known Dutch struggle for independence against the Spaniards than to through this siege of Ostend , which was held by the rebels came. This siege in 1604 was one of the most costly in the early modern period .

In 1722, the Roman-German Emperor Karl VI. the Ostend Company for sea trade with the East Indies.

In February 1915, the Supreme Army Command in Ostend set up a "Command of Motor Vehicle Guns" under the direction of Lieutenant Günther Rüdel , in which the leaders and teams of the early anti-aircraft guns were trained. In contrast to the Krupp and Rheinmetall company firing ranges in Tangerhütte and Unterlüß , free balloons and often enemy aircraft could be fired on in Ostend by the sea.

In October 1915 this training command was expanded to become a flak school, and in December 1915 the Prussian War Ministry in Ostend created an additional test command for the further development of the then still quite simple anti-aircraft guns - field cannons mounted on horizontally mounted wagon wheels. A year later, this command was converted into the "Flak Testing and Training Department", where the anti-balloon officers received the scientific knowledge for their work.

During the Second World War , Belgium surrendered 18 days after the start of the Wehrmacht's western campaign on May 28th. A day later, German troops marched into Ostend without a fight. In 1944, Western Allied bombers flew numerous air raids against France (before and after the invasion of Normandy ). Ostend was a target because of its port facilities and was largely destroyed.

“The population of Ostend had been evacuated by the end of August on the instructions of the Bruges War Command (04.08.1944). On September 1st, 1944, the Allies set foot on Belgian soil for the first time and quickly advanced on Brussels. Antwerp, about 70 km east of Ostend, fell into the hands of the Allies on September 4th, 1944. This cut off almost all escape routes for the few Germans who remained in the coastal towns. In the night of September 6th to 7th, the Germans hastily burned the food depot that the Navy had left behind in Ostend. Parts of the port were destroyed, but by the time the Allies invaded the city on September 8, 1944, all Germans had already left it. A Canadian regiment of the "Manitoba Dragoons", which the day before had been 10 km to the west in Nieuwpoort, was sufficient for the liberation. In general, the Germans offered hardly any resistance worth mentioning along the coast between De Panne and Zeebrugge. "

The city is a transport hub (car, rail, ship and plane).

With the world's longest tram - the Regional tramway Kusttram - reach passengers all Belgian towns on the coast of De Panne to Knokke .

The airport Ostend-Bruges is mainly used for freight, but also for Feriencharter- and business travel.

Previously, Ostend important endpoint many well-known long-distance trains (eg Ostende-Wien-Express , Northern Express , Ostende-Cologne Pullman Express , Tauern-Express , through car on the Orient Express ), since the port of Ostend from favorable Anschlussfährverbindungen after England were .

Today the terminus in Ostend, which is frequented by around 80 trains every day, is the starting point for the hourly IC trains of the connections:

In addition, Ostend was connected to Paris Nord by a number of Thalys trains until March 31, 2015 .

The port of Ostend used to be one of the most important ferry ports for traffic to England, but became less important after the opening of the Channel Tunnel and the completion of the motorway link to Calais shortly thereafter. There were then temporary ferry connections with the southern English city of Ramsgate , which (as of 2013) have been discontinued.

There is a Navtex station for the North Sea near Ostend . 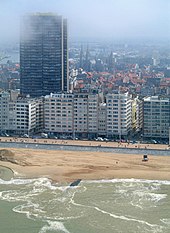 Beach, sea dike and the Europacenter