Three-volume is a redirect to this article. For the makeup artist and special effects artist, see Bari Dreiband-Burman . 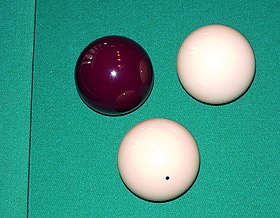 Carom , even Carom or carom , Billardkarambol or Karambolagebillard , (of French carambole for the red billiard ball to Spanish carombola , possibly with reference to the star fruit ( carambola , of Portuguese carambola , from Marathi karambal ) to remember a red billiard ball ) is the umbrella term for a variant of billiards that is played with three balls . The "balls" are called "balls" in technical jargon and have been red, white and yellow since the 1980s. Older ball sets have two white balls, one of which is marked with a dot. However, this is hardly noticeable for spectators and so only ball sets with different colors are used in tournaments. At 61.5mm, the carom balls are one of the largest balls of all billiards. In contrast to pool or snooker , no balls are sunk here because the table has no pockets . There is also a variant with four balls (+ blue). The balls can also have red dots to demonstrate for the spectators. The spin of the balls can be seen very well on these balls. Carom is a precision sport .

Kick-off line-up for a collision (all disciplines)

The basic rules are simple and apply to all disciplines:

Each player plays with the same ball throughout the game, his “cue ball”, which is colored yellow or white. He must try to push it so that it touches the other two balls (“carom”). If this succeeds, one point counts and the player may continue his series. Both the points scored and the recordings of how often each player came to the table are recorded. The game ends when one of the players reaches a specified number of points (the so-called goal of the game ). Most of the time (by setting a maximum number of recordings , abbreviated as HAZ ), the game is played with a record limit. When the goal of the game is reached by the kicking player or the HAZ, the second player performs the so-called post-kick from the starting position (exception: in the set system with more than one shot). Every game starts with the kickoff. The first ball to be hit is the red one.

The original variant is the free game, in other disciplines there are additional aggravating rules that require you to leave the marked fields according to certain rules (cadre disciplines) or to play using boards (cover, three-cushion).

The free game is the basic discipline of carom billiards. The basic rule here is that a collision is achieved when the cue ball touches the other two balls; without restrictions. The only exception is the corner area, which is marked by a fine chalk line on the cloth (corner swab). The restriction here is that if both object balls (Ball 2 and Ball 3) have entered the marked area, an unrestricted collision may only be achieved once. In the second shot after entry, one of the two object balls must leave the marked area. But he can run back into it. The referee announces these game situations with the announcements “entrée” (or “entry” or “in”) and “dedans” (or “exit” or “inside”). A ball lying in the middle of the line is counted against the player (ie as “in” or “in”); with the announcement “à cheval” (or “astride”) the referee decides in an unclear situation (for information for opponents and audience) that both object balls are not (anymore) in the restricted area.

The "American Series" ( video ) is characteristic of the Free Game . It was developed in 1876 by the Canadian brothers Dion and the American player Sexton. In the American series, the player drives the two object balls along the board around the table. In principle, a distinction is made between two different techniques, the “driving series” and the “three-way system”.

The three-way system starts from a closed position (closed position means that the second and third ball are pressing). An imaginary line through the two pressing balls would result in an angle of about 45 ° to the band. The three-way system got its name from the fact that exactly three hits are required to get back to the starting position - but a few centimeters further in the direction of play. On the first stroke, the ball that is further away from the board is hit first. In the second, the ball closer to the gang is hit first and a so-called attitude towards a “touch of one's own ball” is created. The third shot hits the ball closer to the gang first, the cue ball lies down on the third ball; the first hit ball then puts its own ball backwards into the field and lies down again to press the ball further away from the band (starting position). The three-way system is possible if the game is played correctly and precisely, even if the distance between the three balls and the boards is greater.

The driving series also assumes a closed position, with the game ball normally being a little closer to the board . With a perfect style of play, the series of drives consists of just one push, whereby the ball closer to the fence is hit first and “driven” over the fence a few centimeters in the direction of play. In the meantime, the cue ball hits the ball that is further away from the band and also drives it a little forward. The speed of all balls is just chosen so that the result is again a closed position, so that exactly the same shot can be repeated. 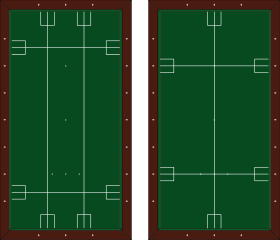 With the cadre, the table is divided into nine or six fields by fine lines of chalk. In addition, so-called anchors are drawn on the large table. Special rules apply within these areas. If the cue ball and one of the other balls have contact after they have come to rest, which is also known as "press", you have the choice here, in contrast to the free game, to have the balls set up again or to continue playing. In the event that you continue to play, you must play away from the ball with which contact is made, otherwise a so-called penetration occurs. When setting up after pressing a ball or jumping out of the table, all three balls are always placed again. A distinction must be made between the following cadre disciplines:

The number in front of the slash indicates the distance between the drawn lines in centimeters and the bands. The resulting fields are the cadre fields. This results in nine fields for 47/1, 47/2, 38/2 and 35/2 and six fields for the other disciplines in the cadre. The number after the slash indicates how many points you can score in a field before ball 2 or 3 has to leave it. That means: If Ball 2 and Ball 3 (Ball 1 is always the cue ball) in one of these fields, they are “in” for the discipline Cadre 47/1 (also called Einballcadre ), for the other Cadre disciplines (these are those with the addition / 2) "in". Instead of “in” one also says “entrance” or (French) “entrée”, instead of “inside” also “exit” or (French) “dedans”. If you get a point in a field at “in” and balls 2 and 3 are still in the same field, it is now “in”. If “inside”, Ball 2 or Ball 3 must leave this field. If a ball is kicked out of the field and rolls back into the same field, this is permitted.

In the anchor fields on the large table, the same conditions apply as in the normal cadre fields.

The “dash series” is characteristic of Cadre. Similar to the American series, the attempt is made to collide the two object balls next to each other on the cadre line in different cadre fields. Since the two balls being played - even with the greatest sensitivity - always move a little away from each other, after a few pushes it becomes necessary to press Ball 2, which is closer to the board, to the board so that it can run again in the immediate vicinity of Ball 3 and the cadrestrich to be stopped by ball 1: The series of lines begins again.

The anchors are located at each end of a cadrestrich on the gang. The anchor measures 17.8 cm x 17.8 cm (7 inches x 7 inches) and is half in adjacent cadre fields.

In this discipline, one's own cue ball (ball 1) must touch at least one board before the collision is ended. The easiest way to do this is often to pass Ball 2 directly to then get to Ball 3 via the board (s). However, other possibilities are also conceivable with a front rail (s), in order to only then crash balls 2 and 3 - with or without intermediate rail (s).

An interesting variant is the so-called “Einband-Amerika” (named after the analogous “American series” in the free game). The two object balls (B2 and B3) are placed close together in the vicinity of the band and approximately perpendicular to the band. The cue ball (B1) is now repeatedly played very gently over the (almost) pressed against the board (possibly with a supporting board) until the position has opened too much. Correctly adjusted, one of the balls can then be brought back into position via the gang (s), after which the series can begin again.

In this type of billiards, your own game ball must have touched a board at least three times with the third game ball before the crash so that a point can be counted; it can always be the same. In contrast to other pile-up variants, this particular challenge allows even advanced players only a few points per shot: there is a comparatively quick change of players. For this reason, the tension for the viewer is particularly great, which also explains the comparatively great public interest in this variant. For this discipline, a set of balls (billiard balls) marked with red dots has been used since 2005, both at world and European championships, as well as in the German federal leagues, which enable spectators to better track the spin .

This variant is played mainly in Austria and is also called a game of luck because of the frequent strokes of luck. It thus guarantees a sense of achievement even for beginners. An additional colored (mostly blue) ball is used. The goal here is also the collision, but its value is different: game ball hits

The blue ball is placed in the middle when kick-off. You can kick off from any ball or over the boards. Before the start of the game, special agreements such as “don't hit the ball = write everything down” or “return the points” can be made if the goal is exceeded.

In the following overview, all world and European championships in the field of carom billiards are listed alphabetically.

Due to the high costs and decreasing (media) interest, only the three-cushion world championships have been held every year for many years. Since 2013, an organizer has been found for all European championships with Brandenburg an der Havel every two years.