The title of this article is ambiguous. Further meanings are listed under Nordexpress (disambiguation) .

The Nord-Express was a long-distance train with routes that changed over the decades, connecting Paris with Russia and later with Poland and Scandinavia . In its heyday before the First World War, it was considered the ultimate European luxury train.

Nord-Express from 1896 to 1914 (red: standard gauge, blue: Russian broad gauge, black: connections with the Sud-Express and to London)

After the Compagnie Internationale des Wagons-Lits (CIWL) was founded by the Belgian Georges Nagelmackers , the latter designed projects for Europe-wide long-distance connections with luxury trains . The aim of his efforts was, among other things, a transcontinental connection from Lisbon to Saint Petersburg . This concept was too complex and could not be implemented. Rather, there were two separate connections: Lisbon – Paris as the Sud-Express and from May 9, 1896, the beginning of the summer schedule of that year, the Nord-Express from Ostend / Paris to St. Petersburg.

For the operation of the Nord-Express , the CIWL had to conclude contracts and timetable agreements with 14 railway administrations, including nine Prussian administrations, as well as the shipping service between Dover and Ostend. The management was in the hands of the Royal Railway Directorate in Berlin, since the Prussian State Railways provided the largest continuous section of the route of the train (1419 km). Here he wore the train number L11 / 12.

In its heyday before the First World War, it traveled as an exclusive luxury train from Paris and Ostend (with a connection from London ) via Hanover , Berlin , the Prussian Eastern Railway and Dwinsk (Dünaburg, today Daugavpils) to St. Petersburg with through coaches to Riga . Specially designed, distinctive dark brown cars were used. At the beginning it ran once a week, from the autumn of 1897 twice a week and from the end of 1899 daily. After 1900 the train ran daily west of Berlin. East of Berlin he drove twice a week to St. Petersburg and Riga and once a week to and from Warsaw and Moscow via Bentschen , Posen and Thorn .

A transfer-train, however, was due to the different track gauges in Russia and Western Europe, as well as a Umspurung not yet possible. A Russian connection between Saint Petersburg and Eydtkuhnen was established. There, the standard gauge was changed to identical carriages on the same platform. This happened in the opposite direction at Wirballen station (Russian Вержболово). The two border stations, only two kilometers apart, were both equipped with both gauges. The train was usually made up of a baggage car , a dining car and four sleeping cars .

The travel time between Paris and St. Petersburg was about 52 hours. In Daugavpils there was a connection via through coaches to the Trans-Siberian Railway and thus to China until 1914 .

In the First World War , the connection that now cut the fronts was discontinued. 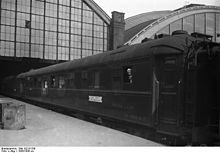 Train composition of the Nord-Express in the winter timetable 1938/39, section Hannover – Berlin

The First World War shifted the borders crossed by the train, brought about the overthrow of the political systems in some of the participating states and a general economic crisis that culminated in hyperinflation in 1923 and deprived the train of its passenger potential. The heyday of the Nord Express was over.

In the Versailles Treaty , the German Reich was obliged to run international express trains on the routes of the Reichsbahn at a speed at least comparable to the fastest national trains. From 1921 onwards, the reintroduction of the Nord-Express was negotiated on this basis. The aim of the French government in particular was to maintain a reliable connection to the newly formed Poland , an important part of the Cordon sanitaire .

Initially, however, the CIWL could only enforce direct through coaches that were carried in express trains. From March 15, 1921, direct sleeping cars ran from Ostend, Calais and Paris to Warsaw, cars to Riga followed in 1923. The express train used for this carried the old train numbers of the Nord-Express in France and Germany. From 1924 he was given the name Paris-Berlin-Riga-Varsovie-Express .

It was not until the beginning of the timetable year 1926/27, on May 15, 1926, that the Nord-Express was to be reintroduced as a luxury train exclusively with sleeping and dining cars between Paris and Warsaw. Józef Piłsudski's May coup in 1926 prevented this, however, at first the train only ran between Paris and Berlin. It was not until May 15, 1927 that the Nord-Express returned to Warsaw. Because of the lack of interest from the Soviet railways , the route in the east no longer led to Russia. In return, the train now has direct sleeping cars from Paris and Ostend and Calais (with a connection from London) via Berlin to Warsaw and Riga.

From 1929 there was a sleeping car from Paris to Hamburg , which was initially extended to Copenhagen on a trial basis in 1932 and then from 1935 onwards . There were connections to the other Scandinavian capitals. In 1934, the direct sleeping cars from Ostend to Berlin, Warsaw and Riga were discontinued, but the Nord-Express received a through car from Ostend to Bucharest , which was run from Berlin in normal express trains via Breslau , Krakow and Lemberg . From 1929 to 1933 the Ostend-Cologne-Pullman-Express brought the through coaches for the Nord-Express to Berlin, Riga and Warsaw from Ostend to Brussels.

Also from 1929 the train ran in Poland on the new Stralkowo - Kutno line , which shortened the distance by 86 kilometers. Over the years, several hours of travel time have been saved through improved superstructure and changed routes. This made it possible for the first time in 1935/36 to establish a direct connection with the Süd-Express to and from Lisbon in Paris.

The Nord-Express , in which CIWL has also been using its most comfortable sleeping car type with the CIWL Type Lx since the early 1930s , ran daily on its busiest route, west of Berlin. To the east of Berlin, on the other hand, it only ran three times a week and usually ended in Warsaw. The Riga through car was transported between Berlin and the Eydtkuhnen border station with the pair of trains D 1/2 on the Prussian Eastern Railway . From Eydtkuhnen an express train of the Lithuanian State Railways took him to the Latvian border, where the Latvian LVD took him over for the last few kilometers to Riga. The original management of a complete wing train as a CIWL luxury train, planned in 1927 and already agreed in writing, did not materialize, it remained with through cars. Only from 1936 to 1939 was the Nord-Express continued to the Polish-Russian border, where it had connections to Moscow . From 1938 he also drove to Warsaw every day.

The Second World War ended this second chapter in the history of the Nord Express . It was discontinued on August 27, 1939.

After the Second World War, the Iron Curtain and new borders interrupted the traditional route of the Nord-Express . As early as 1946 it operated again as L11 / 12, but now between Paris and Copenhagen via Aachen , Bremen , Hamburg and Flensburg and from 1963 via the Vogelfluglinie . From 1952, the Nord-Express also received direct sleeping cars from Paris to Oslo and Stockholm. However, it was no longer made up exclusively of CIWL cars. With the abolition of the luxury train type , the Nord-Express became a normal international express train, but as D 11/12 it retained the traditional train number from the times as a luxury train until 1966. From 1967 it was designated as D 373/274. From the mid-1970s, he gradually lost the long-running sleeping cars to Scandinavia. The last run was the Nord-Express (1993/1994 as D 232/233) on the Ostend - Copenhagen route and was discontinued in 1997.

The fastest rail connection between Saint Petersburg and Paris is no longer via the Baltic States and the old Eastern Railway , but via Moscow - Minsk - Brest - Warsaw - Berlin - Hanover - Cologne - Brussels to Paris. There is no longer any continuous rail traffic between Germany and the Baltic states.

Until 2008 there was a daily night train from Hamburg-Altona via Bremen - Osnabrück - Liège - Brussels to Paris. At the time of the timetable change on December 13, 2008, the train was initially discontinued and re-established in December 2010. When the timetable changed in December 2014, DB and SNCF canceled their last night train connections from Paris to Germany, and Copenhagen also lost all night trains. Since 2015, the Russian state railway RŽD has been operating a direct train Moscow – Berlin – Paris with sleeping cars , which runs three times a week.

Compared to the Orient-Express , the Nord-Express has drawn significantly less attention. The train is still one of the most famous luxury trains of the CIWL. Accordingly, it has received several literary and artistic mentions.

The novel Maigret and Pietr der Lette begins with the arrival of the Nord-Express at the Gare du Nord in Paris, so the first German translation was given the title Nordexpress in 1936 . Similar to the 1951 twisted thriller received Strangers on a train by Alfred Hitchcock in German distribution for several years the title of conspiracy in the north-Express , in France, the film was given the title L'Inconnu du Nord-Express . Vladimir Nabokov described it in his 1967 under the title Memory, speak. Reunion with an autobiography (Speak, Memory) published autobiography his ride on the North-Express in 1906 from St. Petersburg to Paris. Cinematically, the Nord-Express was immortalized again in 1971 in a crime scene thriller called Kressin stops the Nordexpress . Sieghardt Rupp played the main role as customs investigator Kressin .

The Art Deco posters designed by AM Cassandre for the CIWL for the Nord-Express are also well known.