Kutno is a city in central Poland with almost 45,000 inhabitants. Kutno is a county seat in the Łódź Voivodeship .

The first written mention of the place comes from the year 1301, however, it is assumed that Kutno was founded in the 12th century. The city charter was granted in 1432. In the years 1626–1629 the area around the city was devastated in a war between Poland and Sweden . This caused Kutno's economic decline.

In 1809, General Jan Henryk Dąbrowski took up residence in Kutno, the town's population at that time was just over 2,000. In 1827 there were 4,620 inhabitants. In 1862 the railway line from Bydgoszcz to Warsaw , running through the city, was opened.

At the beginning of the Second World War , an offensive by the Polish army under General Tadeusz Kutrzeba against the German army took place near Kutno from 9 to 19 September 1939 . This offensive is known today as the Battle of the Bzura . After the annexation of western Poland, Kutno belonged to the Reichsgau Wartheland and was the seat of the German district of Kutno from 1939 to 1945 . In 1945 Gustav Kilian became the city's mayor for a short time. At the end of the war the city became part of Poland again. 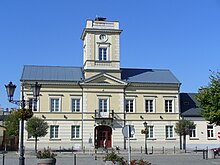 The city of Kutno forms an independent municipality ( gmina miejska ).

The most important industrial companies in the city include Teva Kutno SA , Fresenius-Kabi SA and Polfarmex SA , which belong to the pharmaceutical industry. POLMOS SA is active in the food industry, Kofola SA is a major beverage manufacturer, Polsad - Renault Trucks and AMZ-Kutno are active in vehicle construction. There is also a branch of the Kellogg Company here , where, among other things, Pringles chips are manufactured for the European market. There is also the IDEAL bicycle factory and a subsidiary of BASF .

At the European route 30 in Kutno there is an industrial area which is part of the Special Economic Zone Łódź ( Łódzka Specjalna Strefa Ekonomiczna ). The site has an area of ​​40.66 hectares and offers tax breaks for investors. 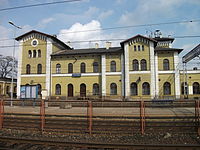 Kutno is a railway junction on the Warszawa – Poznań railway line . Here route 16 branches off to Łódź, route 18 via Bydgoszcz to Piła and route 33 to Brodnica .