Polish license plates in the design used since May 2006

Two-line version since May 2006

The last valid Polish license plates have black letters and a black border on a white background. The first letter stands for the voivodship (in the picture example S for the voivodeship Silesia ), the next one or two letters stand for the city or the district (in the picture example G for the city ​​of Gliwice ) of the exhibition. This is followed by a rectangular certification sticker and, for one-line signs, a combination of four or five, for two-line signs, four letters and numbers.

All license plates issued since May 2, 2006 show the twelve stars of the European flag and the letters PL in a blue bar on the left. From 2000 to May 1, 2006, the signs were marked with the flag of Poland instead of the European symbol .

A license plate of your choice can be requested in Poland for a fee of around 240 euros . During the production period of around three weeks, the vehicle is given a temporary license plate. The first letter of the desired license plate stands for the voivodeship, followed by a serial number (0 to 9) and three to five desired letters, e.g. B. , whereby at most the last two can be replaced by digits, e.g. B. , , , , , . L0 BIBIF0 MAREKB4 BMW99K6 Z17D8 JA3Z2 ONA8O0 OOOOO

Historic vehicles have license plates with a yellow background. As with the unspecific license plates, they start with two or three letters indicating the place of registration. This is followed by two digits in the first case and one in the second. Depending on the type of vehicle, car or two-wheeler, there is also a corresponding pictogram on the right-hand side.

License plates with a limited validity have red letters on a white background. They show a letter for the voivodeship followed by a number. After a seal either four digits or three follow with a final letter other than B .

They are the same as the temporary labels, except for the detail that only three digits followed by a B after the seal .

Diplomatic license plates show white letters on a blue background. They begin with the letter of the voivodeship and then have six digits, with the first three indicating the country represented. Most of these signs begin with W for Masovian Voivodeship, as most of the diplomatic missions are in Warsaw.

Polish police license plates begin with the letters HP followed by another letter indicating the voivodeship, e.g. B. HPD stands for the police in the Lublin Voivodeship . The signs of the anti-corruption authority ( HA ), the Ministry of the Interior ( HB ), the customs administration ( HC ), the domestic secret service ABW ( HK ) and the border guard ( HW ) follow this pattern .

Signs of the Polish Armed Forces begin with a U . The abbreviation SU has been used for members of the diplomatic corps since 2007 . There is no flag on the license plate. 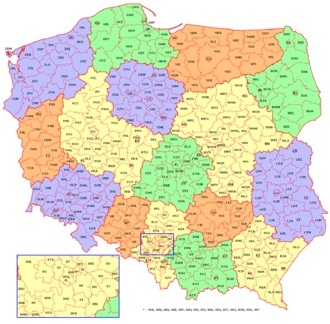 Geographical distribution of the abbreviations

The Polish license plates have always consisted of seven letters and numbers since 2000, and since the beginning of 2007 there have also been eight-digit license plates, e.g. B. FSD 00111.

Two-line license plate, e.g. B. for motorcycles, have a four-digit combination after the two letters for the designation of origin according to the scheme XX 1111 or since 2002 also XX 111A .

Cities and counties with the highest registration numbers

The list reflects the status around August 2016. This list only shows the numbers currently assigned. This does not indicate the total number of registrations, as some circles have left out some number ranges. In some Warsaw districts, numbers of the districts WW and WX are still only issued with certain final letters, for example in Wesoła WX 594YJ, in Włochy WW 106XM.

Since 1976, license plates with white letters on a black background have been issued in Poland. The inscription consisted of three letters, the first two of which indicated the origin, followed by four digits. In recent years, one or two letters could appear in the sequence of numbers.

1  Lies mostly in Asia .  2  Has additional areas outside of Europe.  3  Geographically located in Asia, but a member of the EU .