Piekary Śląskie [ pʲɛˈkarɨ ˈɕlɔ̃scɛ ] ( German  German Piekar ) is a city centrally located in the Silesian Voivodeship in Poland . The city forms an urban district in which around 56,000 people live.

The mining town was created by the merger of the localities Piekary Wielkie and Szarlej in 1934. The newly formed town received city ​​rights in 1939 . Piekary Śląskie is a well-known Marian pilgrimage site .

Piekary Śląskie is located on the eastern edge of Silesia, in the north of the Upper Silesian Plate and the Upper Silesian industrial area 5.5 km north of Bytom (Beuthen), about 14 km southeast of Tarnowskie Góry (Tarnowitz) and is about 16 km from the voivodeship capital Katowice . The city occupies an area of ​​39.7 km² at an altitude of 200 to 300  m . Hard coal formations , barite , colored sandstone and shell limestone can be found in the soil . The Brynica (Brinitz) flows through the city and its surroundings . The highest elevation in the city is the Liberation Hill (copy Wyzwolenia) with 356 m, which was artificially raised in the thirties. The vineyard (Winna Góra) is at 350 m the highest natural elevation. The lowest point of the city is in the valley of the Brynica (216 m). North of the city in the district Kozlova Góra is the dam Kozlova Góra .

Piekary Śląskie has been divided into seven districts since 1975: 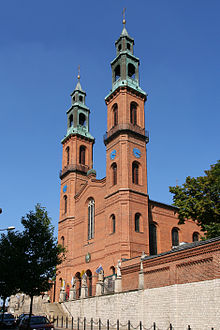 Bytomska Street, the main street of the city

The facade of the house Jana-Ficka-Str. 3 with figurines of Mary

Piekary Śląskie was first mentioned in the 12th century. The first church was built between 1303 and 1318 and at the same time its own parish was founded. Since its foundation, the settlement was in the territory of the Silesian Piasts and was originally a Polish service settlement of bakers of castellany Bytom . During the German colonization in the east , Piekar was given the addition German in 1369 ( Dewsche Bechker ). In the 15th century, the place was able to develop quickly thanks to the silver and lead ore mining operated here . Lead ore mining had to be abandoned in the 14th century.

In 1683 King John III stayed here . Sobieski of Poland on the way to relieve Vienna . After almost 60 years there were again royal visitors. This time Johann's successor August the Strong , at that time still as Friedrich August I Elector of Saxony, stayed in Deutsch Piekar in 1697. In the local church he confessed to the Catholic faith in the presence of Polish delegates before he was crowned king on the Wawel in Krakow . Here he took his oath on the pacta conventa . In the following century, Deutsch Piekar was increasingly Germanized .

Deutsch Piekar has been an industrial city since the 18th century. 1804 was the Scharley pit, but already in 1704 had George Giesche for later consolidated Giesche heirs secured the right around calamine reduce that for the zinc recovery was needed. This mine was the most important in the region until the middle of the century. There had been a printing works in the city since 1840. In 1842 the construction of the new church in Romanesque style began. Later a calvary was built.

Parts of the population were involved in the Propolian Silesian uprisings (1919–1921). Deutsch Piekar was ceded to Poland in 1922 after the referendum in Upper Silesia , in which 86.6% of the votes for Poland were cast in Deutsch Piekar and renamed Piekary Wielkie . The town, which had previously belonged to the district of Beuthen , was assigned to the district Świętochłowice ( Schwientochlowitz ). In 1934, the current town was created through the merger of the municipalities of Piekary Wielkie and Scharley, and one year later the new municipality of Piekary Wielkie was renamed Piekary Śląskie . In 1939 the place was raised to a city by the Silesian Sejm . However, this could not be realized due to the beginning of the war, so that the city rights were not granted until 1947. At the beginning of the Second World War , the city was defended by former insurgents and scouts . In the years 1939 to 1945 the community was called Scharley-Deutsch Piekar and belonged to the district of Beuthen-Tarnowitz .

After the war, the industry was expanded and in 1954 the Julian hard coal mine was built. The old lead and zinc smelters were later expanded, and mechanical engineering also became an important industry. The city belonged to the then Katowice Voivodeship , Tarnowskie Góry (Tarnowskie Góry), and then to the newly formed Silesian Voivodeship . Piekary Śląskie has been an independent city since then . The city's biggest problem these days is high unemployment , which is mainly due to the closure of numerous industrial plants and mines. In 2003, 12,117 people were unemployed, which corresponds to a rate of 23.1%. Unemployment was thus higher than the average at that time in the voivodeship at around 16%.

Population in Piekary Śląskie according to the area¹:

The former Piekary Śląskie stop, south of the city, is located on the Chorzów – Radzionków railway line , which is no longer used for passenger transport, and on which the Piekary Śląskie Szarlej freight yard is also located.

Image of grace of Our Lady of Piekar

Church of the Resurrection of the Lord on Calvary

The pilgrimage church in Piekary Śląskie has the rank of minor basilica and is consecrated next to Mary to St. Bartholomew .

Already in the old church, consecrated in 1318, there was an image of the miraculous Our Lady of Piekar (1500–1510). During the Northern War the picture was brought to Opole , where it can still be found today. The current picture in Piekary Śląskie is a smaller copy from the 17th century. Since that time and the takeover of the church by the Jesuits , the picture has been the destination of numerous pilgrimages. They began in 1676 with the outbreak of an epidemic in nearby Tarnowitz . According to legend, the city was saved after the residents vowed to walk to the Mother of God in German Piekar every year.

In 1842, the pastor Johann Alois Fietzek began building a new church. The old wooden church had to give way to the neo-Romanesque stone building by Daniel Grötschel, which was completed in 1849 and subsequently supplemented with side aisles and richly painted. After 1862 the miraculous image was placed in a neoclassical main altar in the apse. In the interwar period, pilgrimages with up to 150,000 participants were held, and today Piekary Śląskie is a spiritual center in Upper Silesia and, after Czestochowa, the most important Marian pilgrimage site in Poland. Our Lady of Piekary Śląskie is the patroness of workers in Upper Silesia .

The Calvary was built in the 1870s by Upper Silesian workers on the Cerkwica hill near the pilgrimage church. There are 14 chapels with Stations of the Cross , 15 rosary chapels and the neo-Gothic Church of the Resurrection of the Lord , which was built from 1893 to 1896 by Kgl. Baukondukteur Julius Kapacki was built with a front tower.

At the head of the city administration is the city ​​president . Since 2014, this has been Sława Umińska-Duraj, who ran with her own election committee. The regular election in October 2018 led to the following results:

Umińska-Duraj was re-elected as mayor in the first ballot.

Since August 1, 2002 there has partnered with the Czech town Kroměříž (Kroměříž) in Eastern Moravia .