The title of this article is ambiguous. Further meanings are listed under Mysłowice (disambiguation) .

Mysłowice [ mɨswɔˈvʲiʦe ] ( German  Myslowitz ) is an independent city on the Przemsa in the Polish Voivodeship of Silesia . It is located about 9 km east of Katowice at the confluence of the White and Black Przemsa rivers on the so-called Dreikaisereck and has around 75,000 inhabitants.

The eastern border of the urban area is the Przemsa, which separates Upper Silesia from Lesser Poland . The city of Mysłowice is divided into the following districts:

The Dreikaisereck on a postcard from 1902 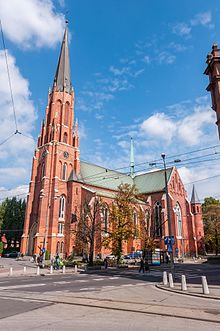 The Wilhelmsplatz / Pl. Wolności in the 1930s

The Slavic village was probably founded in the 10th century and received its patronymic name from a knight Mysł (aw) in the 12th century. The first written mention comes from 1308, when the local priest named Hunold was mentioned. At that time, the city was in the Duchy of Ratibor , a few decades later one of the countries of the Bohemian Crown that belonged to the Holy Roman Empire . Due to its location on the Przemsa, it was a border town to the Kingdom of Poland for centuries, but the Roman Catholic parish of Myslowitz in the diocese of Krakow comprised many villages on the Polish side of the border for centuries. Myslowitz later became the seat of the Myslowitz- Kattowitz estate , which was owned by the von Tiele-Winckler family, among others . Until the end of the 19th century, the lordship held a number of privileges, including mining rights.

In 1742 Myslowitz became Prussian along with most of Silesia . After Russia at the Congress 1815 Congress Poland received and Austria in 1846 the Free State of Krakow had annexed, met the limits of Prussia, Austria and Russia until 1918 in Myslowice. After the German Empire was founded in 1871, the point was called Dreikaisereck .

As a result of the Prussian town reform, the place was classified as a market town in 1808 (with around 400 inhabitants) . The town's houses and the town hall were built from scrap wood. A boom brought the establishment of the coal mines Good Amalie and good anticipation and the zinc plant Amalie Cabin 1825, as well as the border trade with Austria-Poland on Przemsa wooden bridge. In 1853, the New Ring was laid out south of the actual city . The town charter was then reassigned in 1862. Until 1818 the place belonged to the Pleßer district and then came to the district of Beuthen , in 1873 finally to the district of Katowice .

In 1847 the transition station of the Krakow-Upper Silesian Railway (from Krakow ) and the Upper Silesian Railway (from Wroclaw ) was put into operation in Myslowitz . In 1914 the city had 18,800 inhabitants on an area of ​​8.8 km². Although only a quarter of the population was German-speaking in the 1860s and the majority was still Polish-speaking around 1905, in the referendum in Upper Silesia in 1921, which was accompanied by uprisings , 5827 voters, or 56.3% of the valid votes, voted to remain in Germany. Despite this result, the city was awarded to Poland or the Autonomous Voivodeship of Silesia in 1922 .

During the attack on Poland in September 1939, Mysłowice was occupied by the Wehrmacht and rejoined the German Reich. Shortly afterwards, the Myslowitz synagogue was destroyed. Between 1943 and 1945, the Fürstengrube concentration camp was located in Fürstengrube (today the Wesoła district) as a satellite camp of the Auschwitz concentration camp . The inmates were evacuated on January 19, 1945 with the Fürstengrube death march in front of the advancing Red Army .

The population of Mysłowice according to the respective territorial status (without Myslowitz Castle):

At the head of the city administration is the city ​​president . From 2010 to 2018 this was Edward Lasok, who ran for the election committee "Local Administration". The regular election in October 2018 led to the following results:

In the runoff election that became necessary, after incumbent Lasok had already retired in fourth place in the first ballot, Wójtowicz prevailed against the KO candidate Król with 54.2% of the votes and was thus re-elected.

Parish Church of the Birth of Mary 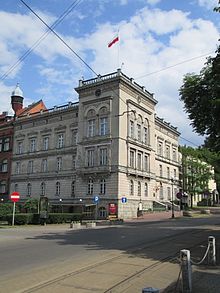 One of the city's sights is the parish church of the Nativity of the Virgin Mary ( Narodzenia Najświętszej Marii Panny ) from the 14th century. It was rebuilt in the Baroque style between 1740 and 1742 . Another neo-Gothic renovation followed in 1901.

The Cross Church (Św. Krzyża) , considered to be the oldest church in the city , was originally made of wood. It was destroyed in 1807 and then rebuilt from stone in the classicism style.

In 1992 the rock band Myslovitz was founded in Mysłowice .

In public transport there is a connection to the Upper Silesian tram network .