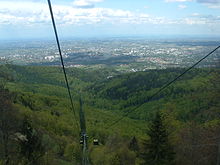 The town hall in Biala 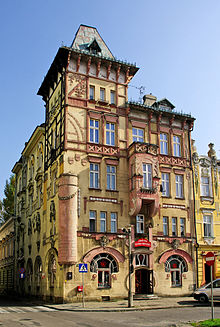 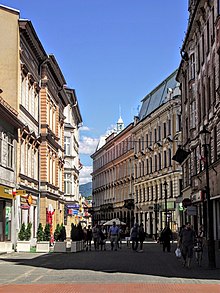 The "German Theater" opened in Bielitz in 1890 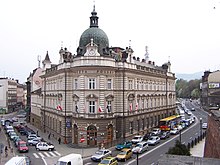 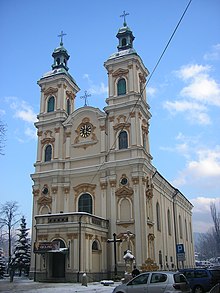 Lutheran Church of the Redeemer in Bielitz 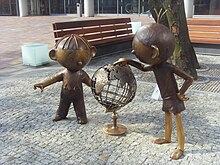 Bielsko-Biała [ bʲɛlskɔˈbʲawa ], German  Bielitz-Biala ( Czech Bílsko-Bělá ), is an independent city in the Silesian Voivodeship in Poland , which was founded in 1951 by the merger of the Silesian city ​​of Bielsko (Bielsko) and the Lesser Poland and Galician city ​​of Biała ( Biala) , which had belonged to the Silesia District (1564–1792) in Polish times , was created. The city became the economic-commercial, cultural center of an area that was often informally referred to as the Beskydy Country.

The city of Bielsko-Biała is located in the Silesian foothills south of the Upper Silesian industrial area on both sides of the Bialka , a right tributary of the Vistula . The capital of the Silesian Voivodeship, Katowice , is about 60 km north of the city. The Czech border is about 40 km west of the city in Teschen .

The Silesian Beskids stretch south of Bielsko-Biała and the Little Beskids east of the city .

The Slavic hill fort in Stare Bielsko (Old Bielsko) dates from the 12th century and in the early 13th century there was possibly a settlement on the site of today's market square in Bielsko, near the ford on the river Biała (Bialka) on the way between Skoczów (Skotschau) and Kęty (Kenty), which at that time was probably the border between the dioceses of Breslau (Teschener Kastellanei in the west) and Kraków (Auschwitz Kastellanei with Pless in the east and north). In 1290 the Duchy of Teschen-Auschwitz was established, the largely mountainous area of ​​which until 1281 was more the periphery of the Duchy of Opole-Ratibor . The first Piast Duke Mieszko I initiated a strong colonization under German law, including the Biala Valley directly on the way between the two most important ducal residences. At that time, some German-language islands emerged between the rivers Ostravice in the west and Skawinka in the east, but the participation of German settlers was probably greatest around Bielitz and the Bielsko-Biala language island was the only one that remained until after the 17th century.

The first written mention of Belsko comes from the turn of the 13th and 14th centuries. About after the creation of the document Liber fundationis episcopatus Vratislaviensis (where Bielsko was not mentioned) and before 1312 Bilitz received city rights. At that time it consisted of only 56 houses.

When the Duchy of Auschwitz was split off from Teschen in 1315 , the border ran through the Bielitzer Land and the Bialka became a border river. Since 1327 both were under the feudal rule of the Kingdom of Bohemia , which was politically confirmed in 1335 with the Treaty of Trenčín . With the transition of the Duchy of Auschwitz to the Polish king, Bielitz was de facto a border town to Poland from 1475 .

After the Habsburgs achieved the royal dignity of Bohemia in 1526 , Bielitz was part of the Habsburg Empire. In 1553 the Bielitz area became its own rule, which was then bought from the Duchy of Teschen in 1572 and, as a minority rule, was subordinate to the Upper Office of Breslau . About 2500 inhabitants lived in it, three quarters of them were Germans. In contrast to the rest of Cieszyn Silesia , the official language in Bielitz was German in 1565, while in the rest of the area Czech remained the main official language for a long time.

In the 16th century the city became a center of handicrafts. Above all, the cloth making was located there. The cloth makers' guild, which existed since 1548, comprised 17 masters in 1571. Bielitz had grown to 179 houses and achieved a certain wealth that made it possible to buy the village of Nikelsdorf and a large urban forest from the Duke of Teschen in 1570.

The Reformation took hold in Bielitz very quickly; The re-Catholicizations carried out in 1628 and 1654 also showed little success. All the churches became Catholic again, but the Bielitzers did not visit them. With the support of the evangelical rule, religious services were secretly held in the woods; Evangelical angle schools existed in secret places in the city .

During the Thirty Years' War the place was sacked by the Swedes and the castle burned down. In the 18th century, cloth weaving developed into an important economic factor in the city. In the War of the Polish Succession , the Russians conquered Bielitz in 1734, in the First Silesian War , in 1741 the Prussians. These lost the city to Austria only a year later. Bielitz was the only Protestant city in all of Austria.

In 1751 the minority rule Bielitz was elevated to a free class rule , in 1752 to a principality and in 1754 by Maria Theresa in her capacity as Queen of Bohemia to the Duchy of Bielitz .

Due to the tolerance patent issued by Emperor Joseph II in 1781, Protestant parishes were established in Bielitz and Biala in 1782.

Around 1800 Bielitz had 4,200 inhabitants and merged with Biala to form a metropolitan area, which in 1815 with 8,000 inhabitants was the second largest in Austrian Upper Silesia after Opava . Industrialization in both cities advanced rapidly. In 1806 the first wool spinning machine was put into operation and in 1811 the first textile factory was built, which was no longer subject to the guild of cloth makers.

In 1808 and 1836 fires raged in Bielitz and largely destroyed the place.

In 1848 the Protestant pastor Karl Samuel Schneider was elected to the Vienna Reichstag , where he was the only Protestant member to stand up for the rights of Protestants in the new constitution.

The Protestant community Bielitz founded together with the city u. a. a secondary school , a grammar school and an engineering school . The evangelical superintendent Theodor Karl Haase , who was also a member of the Reichsrat , made a special contribution .

In the Protestant teacher training college founded in 1867, Professor Karl Volkmar Stoy from Heidelberg taught Herbart's pedagogy for the first time in Austria and trained teachers from all over the country, from Carinthia to Bukowina . In 1890 the city received a German theater.

Bielitz had become the city ​​of the wool industry in Silesia, but textile machinery construction also played an important role.

After 1900, 20,000 workers were employed in the industrial plants in Bielitz, most of whom lived in the villages of the German-speaking island . Unskilled workers often came as commuters from the poor Polish Beskid villages. As a result, the population of Bielsko rose only slightly, while other neighboring cities in Upper Silesia recorded an enormous influx during this time.

Bielitz became part of the re-established Poland in 1920 and, after the referendum in Upper Silesia, united with the areas of Eastern Upper Silesia in the Autonomous Voivodeship of Silesia in 1922 . Even within Poland, the city remained mostly inhabited by Germans (Jews made up around 20% of the population and were predominantly German-speaking). Also due to the 600-year history as a German language island, the emigration of the German population was very low here. The German teacher training college has now also become a place of instruction for German-speaking teachers from the former Prussian or Russian parts of Poland.

On 13 and 14 September 1939 were by the task force  of the I SS under the leadership of Bruno Streckenbach the Bielsko Synagogue and the Synagogue (Biala) blown up. Until the end of November 1939, the Jewish residents in Biala were ghettoized and later deported to the Auschwitz concentration camp . Most of the Jewish residents were killed by 1944.

On February 11, 1945 the Red Army reached Bielsko. Since the Second World War, which resulted in the flight and expulsion of Germans from Central and Eastern Europe from 1945–1950 (around 50% of the German residents fled, then around 2,400 Germans were forcibly evacuated), there is no longer a German-speaking population in Bielitz. Only about 1,600 Jews returned to the city. Jews deported from the Soviet Union increased their number to 3,366 by March 1951. After that, their number fell to 469 in 1956 through emigration to Israel , until finally in 1989 only 50 remained. By July 1947, 3,684 Polish families (21,290 people) had been settled as new settlers - the second largest number after Katowice in the borders of the former Silesian Voivodeship. About 595 families (2225 people) came to the neighboring villages with the repatriation . The uncontrolled and uncounted resettlement caused fewer problems in Bielsko than in Biala, where repatriation was not organized by the state.

As early as July 1, 1941, both places were merged into one town, but this was reversed after the war. In the post-war period there was an expansion of industry and the city continued to expand.

On January 1, 1951, both cities were reunited to form one city Bielsko-Biała, which belonged to the Katowice Voivodeship. In 1961 77,571 inhabitants lived in the twin town. On January 1, 1969, various places were incorporated, so that Bielsko-Biała in 1970 had 105,700 inhabitants and thus became a large city. From 1975 to 1998 the city itself was the voivodeship capital . The administrative reforms of 1975 were largely positively received by the urban population. For the area of ​​the voivodeship the name Podbeskidzie ([the land] below the Beskydy ) was used, which emphasized the new identity of the area in the vicinity of the city of Bielsko-Biała towards Upper Silesia and Lesser Poland. Bielsko-Biała has been the seat of the Bielski Powiat since 1999 , while it is independent.

Etymology of the name Bielsko-Biała

Bielsko-Biała is the official seat of the Bishop of the Diocese of Teschen of the Evangelical-Augsburg (i.e. Lutheran) Church in Poland .

The bishopric Bielsko-Żywiec (German Bielitz-Saybusch) of the Roman Catholic Church has its seat in Bielsko-Biała (German Bielitz). It includes the Powiats Bielski, Cieszyński and Żywiecki in the southern Silesian Voivodeship. Episcopal churches (cathedral and co-cathedral) are located in Bielitz and Saybusch.

In Bielsko-Biała there is the Teatr Polski (German Polish Theater), which was founded in 1890 as the German Theater . Before that, there was already a German-speaking theater in Bielitz, which was opened on March 16, 1857 in what was then the "Guild House".

The Bielsko-Biała Historical City Museum is located in the historical Sułkowski Castle . Other museums are the Museum of Technology and Textile Industry and the Julian Fałat Museum .

The hardcore punk rock band eye for an eye was founded in 1997 in Bielsko-Biała.

From 1907 to 1939, consisted football club Bielsko-Bialaer sports club . The most successful football club today is the Podbeskidzie Bielsko-Biała club , which played second-rate in 2018/19 and competed in the Ekstraklasa in five seasons .

Several regional roads run through the urban area of ​​Bielsko-Biała. These include the two expressways S1 and S52 , which were completed around 2011 .

At the head of the city administration is a city ​​president who is directly elected by the population. From 2002 to 2018 this was Jacek Krywult.

In the 2018 election, Krywult did not run again as mayor, but ran his own election committee for the city council. He supported Jarosław Klimaszewski from Platforma Obywatelska in the city presidential election . The vote brought the following result:

In the runoff election that was then necessary, Klimaszewski prevailed with 55.0% of the votes against Drabek and became the new mayor.

The municipality of Bielsko-Biała covers an area of ​​124 km² with 170,953 inhabitants (as of June 30, 2019). These include the following districts (incorporated villages):