Johanniterkommende : Refectory from the inside, part of the knight's halls 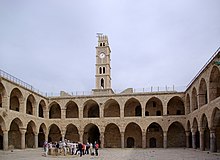 Inner courtyard of the Abud house, in which the Kitab-i-Aqdas was created

The old town lies on a headland on the northern edge of the Bay of Haifa and is surrounded by a strong fortress. On the land side, the old town is enclosed by the new town. While the New Town has a predominantly Jewish population, the Old Town is almost exclusively inhabited by Israeli Arabs and is one of the most oriental cities in Israel.

The port of the city, which was an important port city in the eastern Mediterranean for several centuries , has since lost its importance. Industry , especially iron processing, is of economic importance today . The city has a train station on the Naharija – Haifa line .

The earliest written mention of the city can be found in the Egyptian outlawing texts of the 13th dynasty . There is also evidence in Mesopotamian texts that the city was an important port city as early as the Bronze Age. Among the Amarna letters there are some letters from King Surata to the Pharaoh . Acre was a city-state at the time and served as a vassal of Egypt. Acre also appears in city lists from the time of Thutmose III. , Seti I and Ramses II . The hypostyle of the Ramses temple in Karnak shows the destruction of Acre, probably between 1276 and 1270 BC. In the Anastasi I papyrus from the late 13th century BC Acre is listed as one of the coastal cities of Canaan . From the 1st millennium BC The location belonged to the area of ​​influence of Tire . The Phoenician influence can be proven archaeologically through numerous ceramic finds as well as other objects.

After extensive destruction and numerous reconstructions, Acre again reached an economic boom under Persian rule . After the campaign of Cambyses II against Egypt around 526 BC. Acre was developed into a militarily and economically important center. This position did not change in the course of the next few centuries. In the 4th century BC The settlement expanded and urban development measures began on the plain below the ancient settlement hill. Since 281 BC The city was firmly in Ptolemaic hands and received its new name when it rose to the status of a polis : Ptolemais ( Ptolemaïs ); in honor of the founder of the Ptolemaic dynasty, Ptolemy I Soter .

The city of Ptolemais fell after the end of the Fifth Syrian War around 198 BC. Chr. Finally Seleucid about ownership; just like the other cities of Phenicia and Palestine. The Hellenistic period brought a renewed economic boom due to the massive sea ​​trade with the Greek regions and as far as Italy. This trade can be proven archaeologically through the ceramic finds.

Around the year 64 BC The city was conquered by the Romans . It belonged to the Roman province of Syria .

At the beginning of the year 67, the port city of Ptolemais became the meeting point for the Roman troops in the First Jewish War : 30,000 legionnaires of the Legio V Macedonica and the Legio X Fretensis (both coming from the north under Vespasian ) and the Legio XV Apollinaris (under Vespasian's son Titus from Alexandria ) and about as many auxiliary groups . From there they marched into Judea under the commander-in-chief Vespasian .

In his Naturalis historia in 77, Pliny the Elder describes the mouth of the Belu River at Ptolemais as the only place that supplied the pure sand required for the manufacture of glass .

As part of the Islamic expansion , the city came under Arab rule in 638, which lasted until 1104. In the second half of the 9th century, the Egyptian ruler Ahmad ibn Tulun commissioned the architect Abu Bekr al-Bana ' with the expansion of the port. The port, built with stone layers on sycamore planks, was of great importance for trade in the Mediterranean . The entrance was locked by chains at night.

In the Middle Ages , Acre was the only port on the Levant coast where goods could be unloaded in any weather, which is why it was of particular strategic importance for the crusaders . After the army of the First Crusade had bypassed the well-fortified city before the siege of Jerusalem in 1099, the kings of the Kingdom of Jerusalem they had founded immediately made efforts to conquer it. After a first attempt by King Baldwin I in 1103 was unsuccessful, he succeeded in taking the port city only one year later after a twenty day siege . During the Crusades this was the seat of the Latin diocese of Acre , which was founded in 1135. In addition to pilgrims on their way to Jerusalem, Christian merchants also used the port to trade in goods from Damascus, around 180 km away . The city flourished.

In 1187, in addition to Jerusalem, Acre was also recaptured by Sultan Saladin . After a bitter and long siege (1189–1191) , the city finally fell back to the Crusaders, who had received reinforcements from the Third Crusade under Richard the Lionheart . Since Jerusalem remained in the hands of Saladin, Acre became the capital of the Kingdom of Jerusalem. The Order of St. John and the Knights Templar then also moved their headquarters to Acre. During the siege of Acon in 1190 merchants from Lübeck and Bremen founded the Teutonic Order (Teutonic Knights) as a hospital community. In 1198 it was converted into an order of knights , with Acre becoming the official seat of the Grand Master .

In 1229, after the Peace of Jaffa between Frederick II and the Ayyubid Sultan al-Kamil , Acre was placed under the administration of the Order of St. John - the alternative name St. Jean d'Acre , which comes from the Hospitaller Church of the same name, indicates. Acre became an important interface for conveying Arab culture and science to Europe.

After the final conquest of Jerusalem by the Muslims in 1244, Acre was one of the last bases of the Crusaders. After six weeks of siege and bitter fighting , the Egyptian Mamluk Sultan al- Ashraf Khalil finally took the city on May 18, 1291. The city ​​fortress of the Knights Templar, called iron castle , located directly on the sea, was able to last until May 28, 1291. With the loss of Acon, the resistance of the Crusader states on the Levant was broken and the Crusades failed. The last remaining cities and fortresses of the Crusaders fell by August 1291 without major fighting. Sultan al-Ashraf Chalil had the fortifications razed so that the crusaders would never be able to anchor themselves on the coast again. A Gothic church portal from Acre was brought to Cairo as a trophy .

1517 was Acre under Sultan Selim I part of the Ottoman Empire .

From 1749 the city, which was still partly destroyed, was rebuilt. The fortress was built by Jezzar Pasha , the then governor of Damascus , on the basis of the crusader fortress and expanded by Dhaher al-Omar , the Sheikh of Galilee. Until 1774, Acre was the capital of the Dhaher dominion.

In 1799, Akkon was besieged by Napoleon in vain for 61 days . According to a legend, when the troops withdrew, he threw his hat into the sea with the words "Whoever conquers Acre will conquer the world!" Cannons he left behind are on the ramparts.

With the advent of steamships in the 19th century, the port of Acre lost its strategic importance because the large ships could not dock there.

In 1869 Baha'u'llah , the founder of the Baha'i religion, came to the Akkon prison as a prisoner of the Ottoman Empire , where in 1873 one of his central books, the Kitab-i-Aqdas , was written. The collection of scripts, Messages from Akka, was also created there .

From 1920, Acre belonged to Palestine, which was under British mandate .

On May 17, 1948, three days after the Israeli declaration of independence , Acre was occupied by the Hagana .

In 2001 the old town (63 hectares) was declared a World Heritage Site by UNESCO .

In 2006 the city was targeted by Hezbollah rocket attacks during the Israeli-Lebanese war .

In 2008, on Yom Kippur in the New Town, riots broke out between the Jewish and Arab populations.

The medieval citadel of the city , dominated by the "Treasure Tower" (Burǧ al-Chazna), the oldest houses Coming of St John , a ground-level zweischiffiges refectory (built from 1104), presumably archetype of all Gothic ribbed vault . It was excavated by the German Ze'ev Goldmann , as was the Johanniterkirche der Kommende , which was largely destroyed in 1291 . Its preserved crypt and the excavated parts of the Coming, as far as prepared, are open to visitors as part of the knight's halls . An old Templar escape tunnel from the iron castle to the port is still a magnet for visitors today.

The Catholic saint and general of the order of the Dominicans Jordan of Saxony was buried in the oldest Dominican church (Predigerkirche) of Accons, which has not yet been found again . His ship crashed in 1237 near Acre off the Syrian coast. At the southern tip of the old town, Akkon's most famous church, the Franciscan Church of St. Johannis , towers over the city wall and can be easily seen from the Bay of Haifa .

Since 1980 Akkon has hosted the annual Acco Festival of Alternative Israeli Theater , one of the most important Israeli cultural events. There is also the Okaschi Museum of Art , the Museum of Prisoners of the Underground and the City Museum in the Turkish Hammam.

The list contains a chronologically ordered overview of important people born in Acre. It is irrelevant whether the people later had their sphere of activity in Acre or not. Many moved away after their birth and became known elsewhere. The list does not claim to be complete.