The place is the seat of a diocese of the Romanian Greek Catholic Church .

Canton was founded in 1805 as a small village on Nimishillen Creek and received city status in 1854.

Canton is home to a National Historic Landmark , the McKinley National Memorial . Former President William McKinley is buried here. The National Park Service lists a total of 40 buildings and sites for the city that are registered on the National Register of Historic Places (NRHP) (as of November 29, 2018). 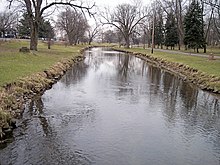 The straightened western upper reaches of Nimishillen Creek on its way through the outskirts of Canton, Ohio

The urban area lies in a rupture landscape that lies along and between the western and central headwaters of the Nimishillen Creek. The named source rivers flow together in the urban area to form the actual river. A third headwaters of said river runs further east at a short distance.

The neighboring communes of Cantons are shown in the following figure.