The Romanian Greek Catholic Church ( Romanian Biserica Română Unită cu Roma, Greco-Catolică ) is a religious community united with the Roman Catholic Church , which recognizes the Pope as its spiritual head.

The religious community comprises around 710,000 members, mostly in Romania. The head of the Church has the rank of Grand Archbishop , who has his seat in Blaj . 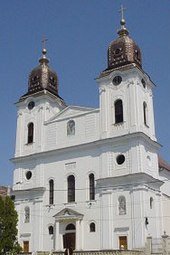 Its origins go back to 1687, when the Roman-German Emperor Leopold I from the House of Habsburg incorporated the Carpathian Basin into his empire. As early as 1693 Jesuits began to evangelize among the Orthodox Christians. These have been under Calvinist influence for decades . Their efforts for the people there and above all the political denial of full civil rights for non-Catholics led to the union with the Catholic Church on September 4, 1700.

Ecclesiastically this area was first under the Latin Archbishop of Esztergom , who is also the Primate of Hungary . First Pope Pius IX. established an independent ecclesiastical province for the Romanian Greek Catholic Church in 1853 , which consisted of Făgăraş-Alba Iulia as a metropolitan diocese and three suffragan dioceses . After the end of the First World War , the area came to Romania in 1920 and in 1940 still had five dioceses with 1,500 priests and 1.5 million believers. But in 1948, after the end of the Second World War , communism established itself in Romania and the United Church came into dire straits. On October 1, 1948, under pressure from the government, six priests announced the solution of the union with Rome and on October 21 they carried out the union with the Romanian Orthodox Church . The bishops and anyone who refused to bow to this measure were imprisoned by the Romanian state. After the revolution of 1989, the United Church initiated numerous lawsuits to get back land and buildings - mostly churches - that had been expropriated by the communist state in 1948. These trials and the massive anti-Catholic propaganda by some Orthodox bishops also prevent an amicable settlement with the Romanian Orthodox Church regarding return claims.

Since 1987 there has been a diaspora diocese in Ohio, USA.

After the fall of communism, it became clear that the Romanian uniate church still largely functioned underground and had also ordained bishops. On March 14, 1990 , Pope John Paul II was able to restore the hierarchy of the United Church and reoccupy its five dioceses. Since 1994 the Romanian Greek Catholic Church has been led by Lucian Mureșan , Archbishop of Alba Iulia and Făgăraș. He was on December 16, 2005 by Pope Benedict XVI. elevated to the position of first major archbishop of the Romanian Greek Catholic Church.

The relationship to Orthodoxy has relaxed noticeably after the Pope's visit in 1999 and the formation of an ecumenical dialogue commission, but some questions about the return of goods still have to be resolved.

The Romanian Greek Catholic Church has the following dioceses :

The proportion of Greek Catholics in Romania (2002 census)