Baia Mare ( pronunciation ? / I ; German Frauenbach or Groß-Neustadt , more rarely just Neustadt or Neustadtl , Hungarian Nagybánya ) is a city in northwest Romania and had about 124,000 inhabitants in 2011. It is the capital of Maramureș County .

Baia Mare is located at an altitude of approx. 230 m on the western edge of the Eastern Carpathians not far from the Gutâi Mountains in the Depresiunea Baia Mare valley . The Săsar , a left tributary of the Lăpuș, flows through the city . 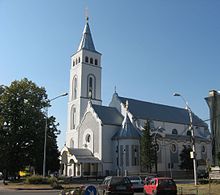 The earliest documented mention comes from the year 1142, when the Hungarian King Géza II had Germans settle in Frauenbach (Latin Rivulus Dominarum ).

In 1930 the Greek Catholic diocese of Maramureș was founded with its seat in Baia Mare. On October 28, 1948, Bishop Alexandru Rusu was deposed as bishop by the communist authorities and arrested. He died in Gherla Prison in 1963 .

On January 30, 2000, a dam broke in a dumping station for metallurgical waste in Baia Mare, which resulted in a serious environmental disaster through the release of sodium cyanide and heavy metals . Because of this event, Baia Mare was mentioned in a 2006 study by the Blacksmith Institute of the world's most polluted cities.

On September 29, 2007, the one year earlier Salonta goula record in Baia Mare was exceeded by a good 2000 to 7200 liters and entered in the Guinness Book of Records .