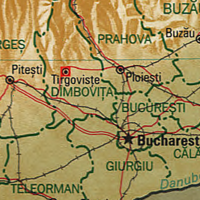 The first known mention of the city was in 1396 by the Bavarian crusader Johannes Schiltberger . The first document in the form of a handwritten letter to the monastery of Tismana was created by Mircea cel Bătrân (Mircea the Elder, 1386-1418).

In Târgovişte was Vlad III. Drăculea enthroned in 1456. In 1499, the Wallachian prince Radu cel Mare (Radu the Great) rebuilt the mountain church of Saint Nicolae, but it was not consecrated until 1514 under the reign of Prince Neagoe Basarab . Today it is known as the Dealu Monastery .

Prince Matei Basarab (1632–1654) repaired the city ​​wall , renovated the old churches and also built some new places of worship. Târgovişte was the capital of Wallachia until 1659, and it was the seat of a prince until 1714.

The leader of the 1821 revolution, Tudor Vladimirescu , was executed in front of the Mitropoliei Church. In the course of the following years, the city lost its great importance as the political and social center of the country, so that today only the charm of a former royal seat of the princes remains.

In Târgovişte on December 25, 1989, following the verdict of a military tribunal, the overthrown communist dictator Nicolae Ceauşescu and his wife Elena were executed .

The station Targoviste is located near railroad tracks Titu-Pietrosita and Targoviste-Ploiesti ; Passenger trains run to Pietroșița via Fieni and to București Nord via Titu . Furthermore, there is the Nordbahnhof (which is no longer served by passenger traffic) as well as the station for Teiș and the Romlux hc stop , which is named after a local lamp manufacturer , in the urban area .