from Wikipedia, the free encyclopedia
This is the spotted version , flagged on July 4th, 2020 . There is 1 pending change that has yet to be viewed.

This article describes the Romanian party. For the Moldovan party of the same name, see Social Democratic Party (Republic of Moldova) .

Partidul Social Democrat ( PSD , German  Social Democratic Party ) is a party in Romania . In the parliamentary elections in Romania in 2016 she won a clear victory; however, since November 2019 she has been in the opposition.

The PSD is a member of the Social Democratic Party of Europe, suspended since April 2019, and is therefore a sister party of the SPD , SPÖ and SP .

According to the political scientist Olaf Leiße and his co-authors Utta-Kristin Leiße and Alexander Richter, the leading politicians of the PSD include “socialists, liberals, neocommunists and ultra-nationalists”. They describe the party as a “reservoir for the former nomenklatura , administrative officials and heads of state business enterprises” and consider the classification as “left-nationalist” to be the most appropriate.

During the Romanian Revolution in December 1989, the Romanian Communist Party disbanded. Some of its former members united in the Frontul Salvării Naționale (FSN, National Salvation Front ) under the leadership of Ion Iliescu and took power in the country. The FSN provided the President with Iliescu and the Prime Minister with Petre Roman (1990–1991) and Theodor Stolojan (1991–1992).

In April 1992 there were clashes within the FSN. As a result, a group split off under Iliescu, founded the Frontul Democrat al Salvării Naționale (FDSN, Democratic Front for National Salvation) and won the parliamentary elections in 1992. From the remaining members of the FSN, the Partidul formed under the leadership of Petre Roman Democrat-Frontul Salvării Naționale (PD-FSN, Democratic Party-National Rescue Front ), which later changed its name to Partidul Democrat (PD, Democratic Party ), before turning back in 2007 to Partidul Democrat Liberal (PD-L, Democratic-Liberal Party ) rose.

The FDSN adopted the name Partidul Democrației Sociale din România (PDSR, Party of Social Democracy of Romania ) on July 10, 1993 when it merged with some smaller parties. From 1992 to 1996 the formation led several governments; Prime Minister was Nicolae Văcăroiu . At times she entered into alliances with extremist parties such as the Partidul România Mare ( Greater Romania Party ). Party leader during this time was Oliviu Gherman . 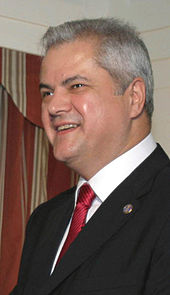 In 1996 the PDSR lost the parliamentary elections; Iliescu took over the party leadership again. In 2000 the party won the elections. She entered into a coalition with the Partidul Umanist Român (PUR, Humanist Party of Romania ); Adrian Năstase became Prime Minister . In January 2001, the PDSR merged with a smaller party, the Partidul Social Democrat Român (PSDR, Romanian Social Democratic Party ) and adopted its current name.

Although the PSD won the most votes in the 2004 parliamentary elections, it had to go into the opposition because it could not find a coalition partner. In the presidential elections in the same year, the PSD candidate Năstase failed in the second round because of Traian Băsescu .

In 2005 Mircea Geoană - the former Romanian ambassador to the USA and former foreign minister - took over the party chairmanship. Former President Ion Iliescu was elected honorary chairman of the PSD in December 2006.

In the parliamentary elections on November 30, 2008 , the PSD emerged as the winner together with the PD-L . The Socialist Party got 33.09 percent in the House of Representatives and 34.16 percent in the Senate. The right-wing liberal PD-L won 32.36 and 33.57 percent, respectively. Both parties then formed a coalition government under Prime Minister Emil Boc (PD-L). That government fell apart in the run-up to the 2009 presidential election . Since then, the PSD has been in opposition again. After Mircea Geoană narrowly lost to incumbent Traian Băsescu in the 2009 presidential elections , he also lost the party chairmanship to Victor Ponta in February 2010 . A group of PSD politicians who supported Băsescu's presidency split off in March 2010 under the leadership of former Interior Minister Gabriel Oprea as Uniunea Națională pentru Progresul României (UNPR).

In spring 2011 the PSD merged with the Partidul Na Liberional Liberal (PNL) and the Partidul Conservator (PC) to form the “Social Liberal Union” (USL). Thanks to further defectors in parliament, the incumbent government lost its majority and was overthrown on April 27, 2012 via a vote of no confidence. President Traian Băsescu then appointed Victor Ponta as the new head of government, so that the PSD has been a ruling party again since then. The following months, however, were marked by a power struggle between the new parliamentary majority and the government on the one hand and President Băsescu on the other, which paralyzed Romania's political life. However, as part of the USL, the PSD won the general election in December 2012.

In spring 2014, the USL broke up due to internal disputes and the PNL left the government. However, Ponta could still rely on a majority in parliament and formed a new cabinet on March 5, 2014 . However, as a PSD candidate , he was surprisingly defeated by the joint candidate of PNL and PD-L , PNL chairman Klaus Johannis , in the runoff election of the presidential election in November 2014, although he was well ahead of Johannis in the first ballot. As Prime Minister Ponta initially remained in office.

In the summer of 2015, allegations of corruption increased around the PSD chairmanship in Ponta. After he temporarily suspended both the party chairmanship and the office of head of government "provisionally", he resigned on July 12, 2015 from the office of PSD chairman. Rovana Plumb then led the PSD on an interim basis until Liviu Dragnea was elected as the new chairman. At the beginning of November 2015, after a fire disaster , Ponta also resigned from his post as Prime Minister. The new prime minister was Dacian Cioloș , who formed a transitional government composed exclusively of non-party experts . The PSD has not been represented in the cabinet since then.

The PSD won the parliamentary elections in Romania in 2016 with around 45% of the vote. Party leader Liviu Dragnea was then elected President of the Chamber of Deputies. After President Klaus Johannis rejected the nomination of Dragnea confidante Sevil Shhaideh for the office of Prime Minister, he accepted Sorin Grindeanu's nomination . This headed a coalition government in which, in addition to members of the PSD, representatives of the liberal Alianța Liberalilor și Democraților (ALDE) of the former Prime Minister and Senate President Călin Popescu-Tăriceanu were represented. Prime Minister Grindeanu lost the confidence of party leader Dragnea after just a few months and was overthrown by a vote of no confidence on June 21, 2017. The previous Minister of Economic Affairs, Mihai Tudose , then formed a new cabinet . On January 16, 2018, Tudose also resigned due to a lack of support in his own party. The previous PSD member of the EU Parliament Viorica Dăncilă then formed a new government and continued the coalition with the ALDE.

Accusations of corruption around party leader Liviu Dragnea have led to ongoing public protests against the PSD government since 2016 , especially since the party, with its parliamentary majority, tried to lower previous standards in the area of ​​anti-corruption through changes in the field of criminal and criminal law. Victor Ponta was expelled from the PSD in 2017 for opposing Dragnea. Ponta founded the PRO România party in February 2018 with a group of supporters who also left the governing parties PSD and ALDE . He criticized the PSD for having become “very populist, very nationalist”. In the 2019 European elections , the PSD lost almost 15 percentage points compared to the previous election and only came to 22.85%.

At the end of May 2019, a multi-year prison sentence imposed on party leader Liviu Dragnea was confirmed in the appellate court and he was sent to prison. Then Prime Minister Viorica Dăncilă took over the party chairmanship. However, Dragnea challenged her election at the party congress - from prison - in court. Dăncilă was voted out of office as Prime Minister in October 2019 following a motion of no confidence, and the PSD has been in opposition to the government of Ludovic Orban (PNL) ever since . A month later Dăncilă resigned as party leader, she was replaced by the President of the Chamber of Deputies, Marcel Ciolacu .