The Alliance ( Icelandic Samfylkingin ) is a social democratic party in Iceland .

The party was formed in 1999 through the merger of several left-wing parties, the People's Alliance (Alþýðubandalag), the Social Democratic Party of Iceland (Alþýðuflokkurinn), the Women's Alliance (Samtök um kvennalista) and the People's Awakening (Þjóðvaki). The official founding of the party took place in 2000.

An attempt was made to unite all left-wing parties in Iceland in order to be able to take a stronger stand against the liberal-conservative Independence Party . This failed, however, when some of the MPs split off again and founded the Left Green Movement (Vinstrihreyfingin - grænt framboð) together with socialist and ecological groups .

After she was the strongest opposition party in the Icelandic parliament Althing for a few years , she took part in the government as a junior partner of the Independence Party after the parliamentary elections in 2007 . After protests from the population, this coalition failed in January 2009. In view of the international financial and economic crisis, the independence party in particular was blamed for the near bankruptcy of Iceland and its three largest banks.

Since then, the Alliance under Jóhanna Sigurðardóttir has led a left minority government together with the Left-Green movement, with the tolerance of the Progress Party . In the early elections in April 2009, the coalition of the Alliance and the Greens won an absolute majority. From 2009 to 2013 the alliance provided Ásta R. Jóhannesdóttir as the president of the Althings .

In the 2013 general election in Iceland , the Alliance and the Left-Green movement suffered heavy losses. As the strongest parties, the Independence Party and the Progress Party could now form a government coalition.

Since June 17, 2014, the party has provided the Mayor of Reykjavík . Dagur B. Eggertsson succeeded Jón Gnarr von der Besti flokkurinn .

Elections to the Althing 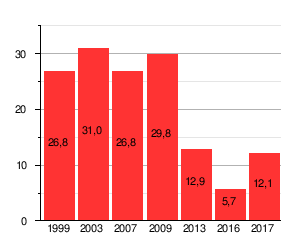 Icelandic parties in the Althing