The Althing ( Isl. Alþingi ) is the parliament of Iceland . It has followed the unicameral system since 1991 . The Althing goes back to the year 930 and is the second oldest existing parliament in the world and the oldest of an independent state after the Faroese Løgting , whose origins go back to the year 900 . On the other hand, the Tynwald on the Isle of Man , which can be traced back to 979, is the oldest continuously existing parliament .

Meaning of the word

Thing is the word for “assembly”, “meeting” and “court” in all Scandinavian languages, at which legal and administrative matters are heard.

The historic Althing existed since the conquest of Þingvellir in 930 as the legislative assembly of the Icelandic Free State. At that time Iceland was divided into gods , each headed by a gode ( goði ), usually a man of noble descent. Disputes were resolved at their own assemblies within this type of community. The divinities developed so far that it seemed necessary to unite them into one state and to create uniform national legislation. In order to achieve this, the Goden sent the wise Ulfjot to Norway, who came back a few years later and on whose initiative the first nationwide meeting of the Althings took place and spoke law according to the Norwegian model.

Ortingvellir, which is 52 km northeast of Reykjavík near the largest inland lake in the country, the avingvallavatn and which consisted of only one farm in 930 , was chosen as the place of the meetings . The Thingplatz at the foot of the Almannagjá fissure is surrounded by huge areas of lava that are only covered with low trees and flowers. To the north of the lake is the 1060 m high shield volcano Skjaldbreiður , which poured out the lava 8000 years ago. According to Íslendingabók , a source about the conquest and saga times, Grímur Geitskór was commissioned by the first settlers to find a place for the popular assembly. After a long search he decided on the plain northwest of Þingvallavatn. The reasons for his choice are repeatedly given that the place was easily accessible from all settlements in the southwest, that there was enough pasture land for the horses and a river, the Öxará . This was later diverted and provided those present with fresh water during the meeting. He also offered the opportunity to catch trout. Allegedly the area belonged to a peasant from Bláskógar who was charged with murder and sent into exile, after which his entire land fell to the general public.

Another important reason was the excellent acoustics of the place. In the center was the "law mountain " Lögberg , on which the law speaker ( Lögsögumaður ) took his place. The normally spoken word could also be heard from afar from the Rechtsberg.

Course of the meetings

The Althing took place every year for two weeks around the summer solstice. All Goden and with them a follower of all free men of legal age were part of the meetings whose attendance was compulsory. An exception was only possible for single farmers, the elderly and the sick. In order to be able to do things, the Icelandic farmer had to have a certain minimum wealth. The original task of the meetings was the public handling of legal disputes, the reaching of judgments and the pronouncement of the judgment, but not its execution. The most important role fell to the law spokesman, who presented the laws to the legislative assembly (Lögrétta) every year. The Althing was probably also a kind of folk festival, family reunion and marriage market, to which the clans took the young marriageable people with them. The tents and stalls were in the Almannagjá gorge. A stand is known and marked even more precisely.

Even during the union with Norway, the assembly met until 1799. Since Iceland came under the authority of the Norwegian king in 1262, executive power has rested with the king and the divinities have been dissolved. However, the Althing continued and shared legislative functions with the Norwegian crown. After Norway and Iceland fell under Danish rule at the end of the 14th century , the Althing was almost exclusively used as a court of law. In 1800 the Althing was dissolved and its functions were transferred to the newly created Supreme Court in Reykjavík.

Iceland, 2 Kronur no year (1930) Commemorative coin for the millennium of the Icelandic state, Muldenhütten mint . Back: THE ALTHING WAS FOUNDED IN 930

The Althing was restored as the parliament for Iceland in 1844. In 1881 it took its seat in the newly built Alþingishús in Reykjavík. The structure of today's Althings was created on December 1, 1918, when Iceland became an independent kingdom in personal union with Denmark . After Iceland was occupied by the Allies during World War II in 1940, the Republic was proclaimed on June 17, 1944.

In 1959 the electoral law was reformed (electoral law of August 14, 1959). Of the 60 parliamentary seats, 49 were assigned in eight constituencies, eleven compensation mandates ensured that the seats were distributed as proportionally as possible between the parties. The distribution to the parties took place according to the D'Hondt method ; the allocation of compensatory mandates won to the candidates on the party list took place through transferable individual votes to Andræ / Hare .

In 1968 Parliament lowered the minimum age to 20 years. A constitutional amendment in 1984 increased the total number of seats to 63 and lowered the voting age to 18 years. An extensive parliamentary reform took place in May 1991: the division into two chambers was ended and replaced by a one-chamber system.

In 1999 the number of constituencies (kjördæmi) was reduced to six from 2003. Their geographical layout now requires a parliamentary law.

After his predecessor Unnur Brá Konráðsdóttir from the Independence Party lost her seat in the parliamentary elections on October 28, 2017, Steingrímur J. Sigfússon from the Left-Green movement , who held this post from 2016 to the beginning of 2017 , is again President of the Althing . There are currently eight standing committees.

Of the 63 members of the Althing, 54 are elected in six multi-member constituencies. Each voter has one vote that he can cast on a party list. In addition, he can cross out candidates from the list or change their order. Seven to eleven MPs are elected per constituency. The seats are distributed according to the D'Hondt method . Depending on the constituency, this creates a de facto blocking clause of 8 to 12%. A further nine mandates will be awarded nationwide so that the number of MPs per party is roughly proportional to the nationwide number of votes of the party. For these so-called compensation seats, only parties that have achieved at least 5% of the votes nationwide are considered.

The following table shows the seats per constituency in the elections since 2003:

The distribution of seats immediately after the early election on October 28, 2017 was as follows:

Since the two MPs Karl Gauti Hjaltason and Ólafur Ísleifsson von Flokkur fólksins were excluded from their party as a result of the Klaustur affair and joined the Center Party in February 2019, the distribution of seats has changed accordingly since then, with 9 seats for the Center Party and two more Sitting by Flokkur fólksins. Another change resulted from the fact that the left-green MP Andrés Ingi Jónsson left his parliamentary group in November 2019 and intends to belong to the parliament as a non-attached MP for the rest of the legislature .

The members of parliament are regularly elected for four years on the basis of proportional representation. Each constituency sends a fixed number of MPs (54 in total), the remaining 9 compensatory seats are allocated according to the nationwide share of the votes of the parties. By determining the number of seats in each individual electoral district, which reflects the population situation at least four to five years before the election to be considered, there is a strong imbalance in the voting weight. Political scientists have calculated that before the electoral district reform carried out in 2002, a resident of the then most sparsely populated district of Westfjords (today Norðurland vestra is the most sparsely populated) had up to ten times the voting weight of a resident of Reykjavík. The reforms have only partially alleviated this inequality. The mandates are awarded according to the D'Hondt procedure .

In the 1994 national local elections, the governing coalition parties, the Conservative Independence Party and the Social Democratic Party, lost support across the country. In the capital Reykjavík, too, the Independence Party lost its majority after more than half a century.

In the following parliamentary elections in 1995 , the Independence Party and the Social Democratic Party lost four seats. They would still have had a slim majority in the 63-member Althing. However, the Prime Minister and party leader of the Independence Party, Davíð Oddsson , chose the resurgent Progress Party as a partner in order to achieve a stronger and more stable majority with 40 seats. In addition to the divided opinion within the Social Democratic Party about the economy and Iceland's possible role within the European Union , the party also hurt itself by being the only party to support Iceland's application for EU membership.

The 2003 parliamentary elections brought losses for the leading coalition parties, the Independence Party and the Progressive Party, but they were still able to continue the joint government.

In the parliamentary elections in 2007 , as in previous elections, the Independence Party won a majority and formed a grand coalition with Allianz (Iceland) under Prime Minister Geir Haarde .

On April 25, 2009 an early parliamentary election took place after the break of the grand coalition in January 2009 . In this social democrats and left-wing Greens won the majority and formed a joint government under Jóhanna Sigurðardóttir .

The ruling parties lost their approval in the elections on April 27, 2013 and a coalition of the Independence and Progress Party has ruled again since then, initially under Prime Minister Sigmundur Davíð Gunnlaugsson (Progress Party) and since his resignation in April 2016 under Sigurður Ingi Jóhannsson (also Progress party). This coalition lost its majority in the early elections on October 29, 2016 . Due to the fragmented political landscape with seven parties now represented in the Althing, forming a government proved difficult; A government made up of the Independence Party , Viðreisn (Reform Party) and Björt framtíð (Bright Future), the Bjarni Benediktsson cabinet, had only been in office since January 11, 2017 . The head of government was Bjarni Benediktsson from the Independence Party . This coalition broke up again in September after a political scandal and Björt framtíð's departure. Early elections were therefore held again on October 28, 2017 .

Allocation of seats since 1919 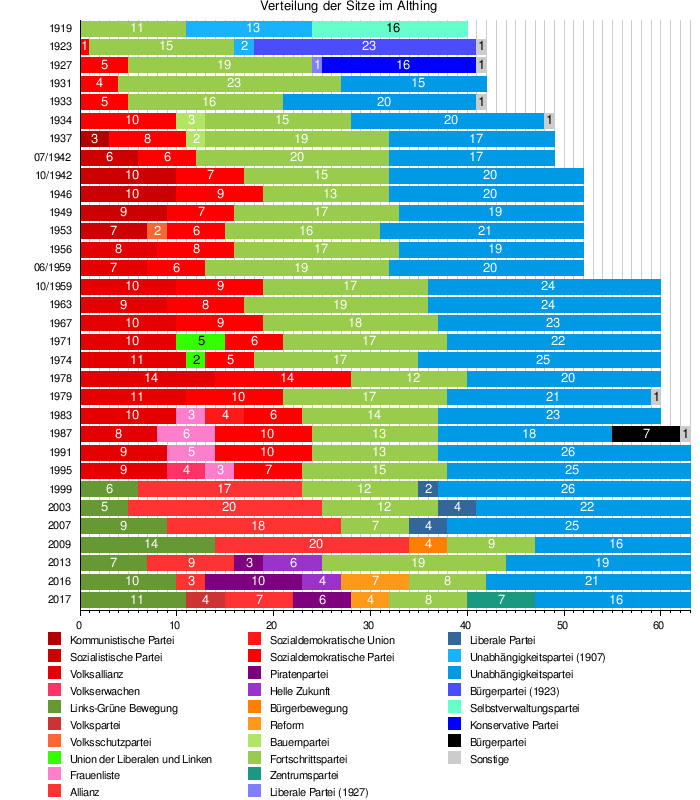