from Wikipedia, the free encyclopedia
Distribution of seats in the Federal Council
Out of 61 seats are:

The parliament building has been completely renovated since July 13, 2017. That is why the National Council and the Federal Council have been meeting in the alternative quarter, the Vienna Hofburg, since September 20, 2017.

Federal Chancellor Sebastian Kurz at the 2017 government declaration in the Federal Council. Redoutensaal in the Hofburg, the conference venue during the parliamentary renovation

The Federal Council has a right of consent in the following cases:

In the case of constitutional changes , a referendum must also be held if a third of the members of the Federal Council so request.

According to Art. 42 para. 5 B-VG, the Federal Council has no right of participation in laws that concern one of the following points:

In contrast to the situation in the German Bundesrat , the Austrian Bundesrat has a free mandate . Each member of the Federal Council can vote freely, there is no compulsion to vote in parliamentary groups or state blocs.

The number of members per federal state is determined in accordance with Art. 34 of the Federal Constitutional Act by resolution of the Federal President after each general census according to the ratio of the number of resident citizens of the federal states to one another; the country with the largest number of resident citizens has twelve seats, but each country has at least three. In 1993 a total of 65 members were appointed, in 2002 there were 62, and the Federal Council has currently had 61 members since August 12, 2013.

Unlike in the German Bundesrat  , the members of the Bundesrat are not bound by instructions from the respective Landtag or the respective Land government ( free mandate ). They enjoy the immunity granted to them by the respective state parliament. The President of the Federal Council, every six months, is made up of the strongest parliamentary group in a federal state. The change of chairmanship takes place alphabetically by federal state and correlates with that in the state governors' conference .

Composition according to parties 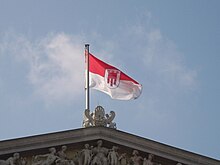 The Federal Council is currently composed of the following groups:

Opinions are being rolled back and forth without any source ...

The usefulness of the Federal Council is controversial. Various political voices (especially from the federal states) want the Bundesrat to be upgraded, while others want it to be abolished. Critics have said that the Federal Council is being abused by the parties as a political cadre forge to enable young politicians to make their first contact with federal politics. It also serves to "praise" unloved veteran members of the National Council.

The usefulness of a two-chamber system in a country the size of Austria has been questioned by some political scientists . Some comparable countries such as Sweden , Norway or Denmark often only have a unicameral parliament .

As an argument in favor of retaining the Bundesrat, it has been argued that bicameral systems are characteristic of federal states because the federal states have a say in federal legislation through the Bundesrat and thus have a certain influence. If the Federal Council were to be abolished without replacement, it would be an overall amendment to the Federal Constitution , which can only be implemented with a qualified majority in the National Council and a binding referendum (Art. 44 Para. 3 B-VG).

In February 2019, the Federal Council prevented a law from being passed for the first time in its history. An amendment to the Green Electricity Act was rejected, and all 21 SPÖ MPs voted against it. This rejection was possible because the law to be voted on would have restricted the powers of the federal states.