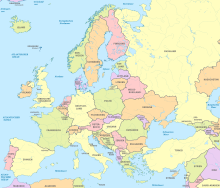 The list of European countries shows the current 47 countries of the subcontinent Europe ( states and extra-territorial areas ) with their capitals according to various criteria such as area , inhabitants , GDP and GDP / capita .

The majority of the territory of four of these states is in other parts of the world, namely in Asia with Russia , Kazakhstan and Turkey, and in North America with Greenland as an area dependent on Denmark . For these countries, the list only shows the areas in Europe. The three Caucasus states Georgia , Azerbaijan and Armenia, however, are not listed here, but in the list of states in Asia , although some define the inner Eurasian border in such a way that parts of the state territory are also in Europe.

See also : Member States of the European Union , List of European Non-EU States and List of Supranational and Intergovernmental Alliances

The following states and extra-territorial areas are geographically in Europe or have part of their territory in Europe:

The following important information is missing from this article or section:
A lot is still missing, for example the Canaries, all British overseas territories, Sint-Maarten or French Polynesia
Help Wikipedia by researching and pasting it .