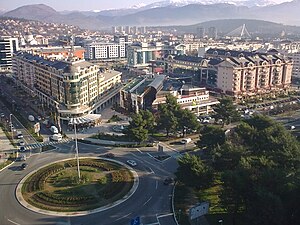 View of Podgorica with the Millennium Bridge in the background

Podgorica ( Cyrillic  Подгорица ; pronunciation [ ˈpɔdgɔˌriʦa ]) is the capital of Montenegro . With the exception of the President, who resides in Cetinje , all important institutions of the republic have their headquarters here. Podgorica has around 150,000 inhabitants, the entire municipality over 185,000 (2011). From 1946 to 1992 the city was named after Josip Broz Tito Titograd . The name Podgorica means "at the foot of the hill" in German.

The Montenegrin capital lies on a wide plain at the confluence of the Zeta and Morača , which flows through Podgorica from north to south. It is about 15 kilometers from Podgorica to Lake Skadar in the south.

Podgorica has a temperate Mediterranean climate, with hot and dry summers and mild winters. The annual rainfall is about 1544 mm and the average temperature 16.4 ° C.

The larger municipality of Podgorica is the most populous municipality in Montenegro. In addition to the capital, the municipality includes the small towns Golubovci and Tuzi and a total of 57 villages and settlements.

Podgorica has twinned cities with:

In the north of today's city is the ancient city center of Doclea . From 1000 AD the area around Podgorica belonged to the Serbian Principality of Duklja under Jovan Vladimir. He was followed as rulers by the Vojislavljević and the Vukanović dynasties, from which the Namanjiden dynasty emerged. Podgorica remained part of the empire until the fall of the Serbian Empire.

Podgorica was first mentioned as a small settlement in 1326 and was long overshadowed by Shkodra , Medun and the coastal towns of Bar and Budva , and later also by Cetinje . It belonged to the Serbian empire of Tsar Stefan Dušan in the middle of the 14th century , then to the principalities of Balšić (until 1421), Lazarević / Branković (1421–1439 / 1444–1452) and Crnojević (until 1466). The city was briefly under Venetian rule. From 1466 on, Podgorica was part of the Ottoman Empire . The Ottomans built a large fortress here to protect themselves against attacks by the free Serbian-Montenegrin tribes from the mountains. With the fortress, the strategic importance of Podgorica grew. At the Berlin Congress in 1878, Podgorica was awarded to the Principality of Montenegro , whose capital at that time was Cetinje. The results of the Congress marked the end of four centuries of Ottoman rule. Podgorica has been the largest city in the country and the most important trading center since that time. The country's first bank was founded here in 1904. At the beginning of the 20th century the city had 13,000 inhabitants. In contrast to the predominantly Slavic-Orthodox dominated Montenegrin heartland around Cetinje, many Muslim Slavs and Albanians lived in Podgorica at that time.

During the First World War , Podgorica was under Austrian occupation from 1916 to 1918 . In 1918 the city came with the Kingdom of Montenegro to the Kingdom of Yugoslavia . During the Second World War , the Italian occupiers (1941–1943) were followed by the Germans (1943–1944). The city was exposed to around 70 air strikes during the war, which almost completely destroyed it. In December 1944 the liberation by the Yugoslav partisans took place . In 1946, the city in honor of the Yugoslav prime minister was Josip Broz Tito in Titograd renamed and at the same time the capital of the Yugoslav republic of Montenegro declared. Since April 2nd, 1992 the city is called Podgorica again . After the independence referendum in 2006 , Podgorica became the capital of the new state of Montenegro.

With the spin-off of the Tuzi municipality in 2018, the total population decreased, while the ethnic composition changed slightly.

Podgorica has an airport 10 km south of the city center.

Podgorica is on the Belgrade – Bar railway line . Branches lead from here to Nikšić (back in operation after modernization and electrification work since 2012) and as an international connection to Albania (currently only freight traffic, resumption of passenger traffic planned).

Local public transport is based exclusively on city ​​buses and was operated by the municipal company Gradsko saobraćajno preduzeće until the turn of the millennium . After their bankruptcy, two private companies operate local transport.

Panorama of the Millennium Bridge (left) and Moscow Bridge (right)

Podgorica is the main center of the Montenegrin industry. There is an aluminum smelter in the city, the Kombinat aluminijuma Podgorica (KAP), which accounts for 45 percent of the country's export output . There are also textile companies and companies processing agricultural products, especially tobacco. Most people, however, are no longer employed in industry, but in the service sector and in government agencies.

Podgorica is the cultural center of Montenegro. The Montenegrin National Theater, the City Theater, the Children's Theater, the Puppet Theater and many smaller theaters are located here. The City Museum, the Natural History Museum and the Dvorac Petrovića and Perjanički dom galleries are the most famous exhibition venues.

Due to its eventful past, the architecture of the city consists of a mixture of different styles. Due to the centuries-long rule of the Ottomans , the Turkish influence is formative for the city, as can be seen in the mosques in the districts of Stara Varoš and Drač. The reconstruction after the destruction in World War II was more oriented towards European influences. Large blocks of flats were built during the time of socialist Yugoslavia. It wasn't until the late 1990s that more modern architecture began to take hold in Podgorica. Glazed apartment houses and office buildings were built. A construction boom began, which has increased since independence in 2006.

Today the symbols of the city are the Orthodox Church of Hristovog Vaskrsenja (Church of the Resurrection) and the Millennium Bridge over the Morača River , which opened on July 13, 2005.

Most of the educational institutions in Montenegro are based in Podgorica. The University of Montenegro , the Mediterranean University , UDG - University Donja Gorica and the Montenegrin Academy of Sciences and Arts are located here . In recent years the number of private teaching institutes has increased. The Podgorica Region has 34 primary schools and 10 secondary schools, including a high school. The Radosav Ljumović National Library is the largest in Montenegro.

Podgorica is the media center of Montenegro. The state television broadcaster RTCG and private stations such as TV IN , NTV Montena , Elmag RTV , RTV Atlas and MBC are located here. The daily newspapers Vijesti , DAN and Pobjeda are published in Podgorica. The renowned weekly magazine Monitor also comes from the city.

The most popular sports in Podgorica are football and basketball. The basketball club KK Budućnost Podgorica has achieved success in many international tournaments in the 1990s and 2000s and is currently playing in the ABA league .

Well-known football players Predrag Mijatović and Dejan Savićević were born in the city and started out at FK Budućnost Podgorica .

The city's volleyball and handball teams have also been successful in European competitions in the past.

Podgorica is the largest stadium in Montenegro, the Pod Goricom stadium. The Morača sports center has a capacity of 4,200 seats and was one of the venues for the 2005 European basketball championship , which took place in Serbia and Montenegro.

The German war cemetery in Podgorica is located on a military site not far from Golubovci Airport .