This article deals with all Slavic Muslims of the Balkans. For the Bosniaks see the relevant article. 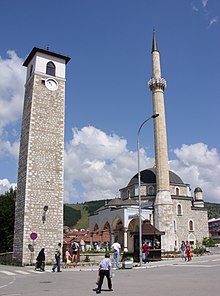 As a Slavic Muslims ( Bosnian / Croatian Slavenski muslimani ; Serbian Словенски муслимани Slovenski muslimani ; Macedonian Словенски муслимани ) refers to populations in several countries of South Eastern Europe live in a Muslim belong stamped ethno-cultural group and a Slavic speaking language. The spread of Islam in this area goes back to the time of the Ottoman Empire , see also History of Bosnia and Herzegovina .

Muslim Slavs in the Ottoman Empire

Slavic- speaking Muslims existed at the time of the Ottoman Empire in almost all areas in which Slavic-speaking populations came under permanent Ottoman rule. There were various reasons for converting to Islam : The ruling class adopted the religion of the country and opened up the possibility of social advancement and a career in civil service ; it made it possible to avoid paying the types of taxes levied only on non-Muslims ; Particularly in times of military conflict , there was also systematic persecution of certain Christian groups in individual regions who were suspected of sympathy with the respective war opponent; In some areas there was at times an acute shortage of priests , churches and ecclesiastical structures, so that ties to the church, if they existed at all, were weakened and willingness to accept a new faith was strengthened; after all, Islam was part of the oriental Turkish - Persian - Arab culture and civilization of the Ottoman Empire, the spread of which under the conditions of the Southeastern Europe of the time could appear in some respects as a civilizational progress , which gave the new religion additional prestige.

In most of the areas that came under the rule of Christian powers again between the 16th and the first half of the 19th century ( Austria , Venice and the first newly established independent Balkan states ), Muslim population groups were not tolerated at that time, but were forced back after the reconquest to either adopt a Christian denomination or to emigrate to the remaining territory of the Ottoman Empire . As a result, the Slavic-speaking Muslim population was concentrated in those wholly or partially Slavic-speaking areas that remained under Ottoman rule longest: Bosnia and Herzegovina, Sanjak , Kosovo , North Macedonia , southern Bulgaria, and northern Greece . In these areas, after the end of Ottoman rule as a result of the Austrian occupation of Bosnia and Herzegovina in 1878 and the division of most of the remaining Ottoman possessions in Europe after the Balkan Wars at the beginning of the 20th century, there was no systematic religiously motivated persecution of Muslims, either when individual Muslim groups suffered from the following nationality conflicts. The sometimes radical change in power and ownership caused parts of not only the Turkish-speaking but also the Slavic-speaking Muslims in these areas to emigrate to the Ottoman Empire and Turkey , where they still constitute a Slavic-speaking population group that is difficult to quantify .

The question of what “ nationality ” the Slavic-speaking Muslims of Southeastern Europe actually belong to was a long time and is partly controversial to this day. In the social order of the Ottoman Empire, Slavic-speaking Muslims had the same social status as Turkish-speaking Muslims, who were the original founders of the empire. Hence, they were often referred to simply as Turks and often viewed themselves as such. As long as the independence movements of the predominantly Christian South Slavic peoples were ideologically based primarily on the denominational opposition to the Ottoman Empire , this term was also adopted by them as a foreign stereotype . With the emergence of new national ideologies arguing primarily with language , territory or origin , this changed: Now the Slavic-speaking Muslims were claimed by the newly emerging national movements as members of their own people, whose denomination was secondary. This sometimes led to competing “claims” by rival national movements on one and the same population group. The majority of the Slavic Muslims themselves remained passive in these conflicts, only parts of the elite identified with the new national movements.

Ethnic Muslims in the context of Yugoslavia's nationality policy

The subject of such a long-lasting national political dispute was the Muslims of Bosnia-Herzegovina, who were viewed by the Serbian side as Serbs and by the Croatian side as Croats , whereby, due to the demographic structure of the country, the national classification of the Muslim population would have been decisive for which one two peoples would have made up the majority of the population of this country. In order to settle this conflict and at the same time to meet the increasing awareness of cultural independence among the Muslims of Bosnia-Herzegovina , the communist government of Yugoslavia recognized the Muslims of Bosnia-Herzegovina under the name Muslims ( Muslimani ) as an independent nation ( nacija ) after the Second World War . This term was later introduced in the other republics of what was then Yugoslavia. The word Muslim , if it denoted the nationality, was written with a capital initial letter ( Muslimani ), if it denoted the religion , which also included people of other mother tongues such as Albanians or Turks , however, with a lower initial letter ( muslimani ).

Most important groups of Slavic Muslims in today's Southeastern Europe

In the historical sense z. B. Saqaliba and Polish converts in Andalusia and Egypt are sometimes referred to as Slavic Muslims.