This article is about the ideation - for other meanings, see Stereotype (disambiguation) . 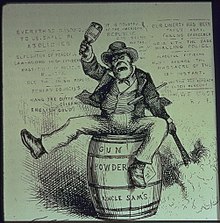 A stereotype ( ancient Greek στερεός stereós , German 'firm, durable, spatial' and τύπος týpos , German 'form, in this way, -like' ) is a description of people or groups that is present in everyday knowledge that is memorable and pictorial and one as typically alleged facts simply refer to them. At the same time, stereotypes are relatively rigid, supra-individual or widespread images.

The term was introduced in 1922 by Walter Lippmann . His work public opinion (Public Opinion) was groundbreaking for the research on stereotypes. In his understanding, the stereotype is defined as "an epistemological defense mechanism against the necessary expenditures of a comprehensive detailed experience". Lippmann understands stereotypes as "solidified, schematic, objectively largely incorrect cognitive formulas that have a central role in facilitating decision-making in processes of coping with the environment".

Like the cliché, the stereotype comes from a technical term used in printing technology and describes repeated, prefabricated print texts. Stereotypes can be verbalized ; simply by mentioning the stereotypical term, they allow the associated complex content to be quickly presented. The categorization of people on the basis of certain characteristics (such as hairstyle, skin color, age, gender ) is a completely normal, fast and almost automatic process for people . Automatic stereotypes are of great interest in the area of social cognition . The term, which is used broadly and interdisciplinary , is not defined uniformly in the sense of an exact operationalization . Related terms in the word field include prejudice - cliché - scheme - frame - and swear word. On the other hand, the image , which only emerged in the 1950s, concerns a more short-lived but more comprehensive pictorial representation of a group or person. The image is built up through personal experience, it must also be cultivated by the image bearer; the stereotype established by a few words and aspects is part of the public consciousness and is part of socialization .

While Lippmann and his successors used the term stereotype in a pejorative sense, as an objectively unfounded and socially harmful idea, today's stereotype research emphasizes the cognitive component of stereotypes. It has been shown that the stereotype accuracy, i.e. the correspondence between stereotype and reality at the group level, is very high. Studies by Lee Jussim, Thomas R. Cain and other researchers in the USA showed an average correlation of stereotypes with reality based on empirical findings (psychological measurements, demographic and sociological data) of r = 0.7 for ethnic stereotypes (blacks, whites , Asians) and of r = 0.75 for gender stereotypes. That means a medium to strong statistical relationship between stereotypes and reality. The influence of the conformity with reality on the stereotypes is greater than that of the bias of the test subjects or the effect of the self-fulfilling prophecy . The stereotype accuracy is greater than that of the assessments of individuals about ethnic groups or the sexes or than the predictive power of social-psychological theories.

The most common use of the term is in a social science context. Here, stereotypes are based on demarcation and the formation of categories around groups of people to which complexes of properties or behavior are ascribed. This clearly distinguishes them from schemes that do not primarily contain social information (e.g. prototypes ). Furthermore, stereotypes (in contrast to sociotypes ) are mainly characterized by the fact that they often highlight particularly delimited and obvious characteristics in a caricatural way and Sometimes generalize wrongly. Such a simplified representation of other groups of people makes everyday interactions with unknown people much easier. Stereotypes triggered by external characteristics (e.g. age, clothing, demeanor, gender) serve as reference structures for expected and expected behavior (→  self-fulfilling prophecy ). However, the resulting simplification also has disadvantages and can, for. Sometimes manifest social inequalities. As soon as characteristics such as gender or skin color are assigned negative evaluations, which clearly limit the possibilities of people to interact in many areas of life, one speaks of prejudice.

In psychology , behavior or movements are referred to as stereotypes, which are repeated frequently and mostly seemingly pointless, regardless of the specific environmental situation.

According to Albrecht Lehmann, stereotypes are relatively rigid, supra-individual ideas. These relate to people and groups of people, nations, ethnic groups, “races”, social groups, religions, regions, cultural landscapes and so on, both as an intrinsic and external stereotype. What is called a stereotype arises in the perception and evaluation of a detail which is used in an uncritical, over-generalization of an actually given reality. Stereotypes serve to simplify and rearrange complex reality. In this way, they act as a means of identification and can promote the cohesion of "groups" of different shapes and sizes, from families to supranational alliances. Folklore looks at the basics of stereotypes in their various cultural environments and seeks to recognize the effects of traditional stereotypes on the present on the basis of topics such as tourism, political relationships, food behavior and intercultural communication.

The methods include interviews and media evaluations. Stereotypes and Ethnophaulismen as German cabbage eaters , French fops and Dutch traders and miser circulating part for centuries and must be justified by other things in cartoons and commercial art from the 18th century. The stereotypes of the early 18th century, which are regularly and extensively documented in the writings of the geographer Johann Gottfried Gregorii alias Melissantes, demonstrate the stability of individual ideas about ethnic groups over time, for example when he writes about the fashion-conscious French, the Swiss who are interested in monetary advantages, or the hot-blooded Italians. The corresponding assignments are common and effective in mangas such as Hetalia: Axis Powers or comics such as Polandball to the present day.

According to the historian and Eastern European specialist Hans Henning Hahn , stereotypes are solidified collective attributions with a predominantly emotional content that can only be grasped in their linguistic and visual representations. Stereotype research does not attempt to determine or refute the truthfulness of stereotypes, but rather to interpret their function and effect in social discourses, the genesis, function and effect of stereotypes in the formation of collective identity. The interaction between self- ascribed car stereotypes and externally ascribed heterostereotypes is of particular interest, which Hahn examines using the example of the Sudeten Germans .

The Intercultural hermeneutics (formerly imagology) examines the "image of the other country," what knowledge of other cultures, languages and mentalities requires such an intense preoccupation with the values and beliefs of their own culture. The aim of intercultural hermeneutics is also a self-analysis through external analysis. The interesting question is how stereotypes arise. Literary texts in particular have contributed to bringing other cultures closer to the home audience and creating a long-lasting image of the other. Stereotypical ideas about other nations are closely related to the self-image of the judging nation.

Among others, Madame de Staëls Über Deutschland is known , whose image of a regionalist, diverse, emotional and imaginative, medieval-picturesque as well as backward and harmless Germany with the stereotype of poets and thinkers after 1815 shaped the view of the French elites for decades .

The image of America by Cornelis de Pauws , who described the colonization of America at the end of the 18th century as unnatural and reprehensible and the indigenous peoples as simple-minded forests, also had significant aftereffects . The New World only brought disadvantages with its inflationary precious metal and the addictive substance tobacco . Without ever having seen America or Americans, Pauw started a heated scholarly argument about the “nature of Americans”.