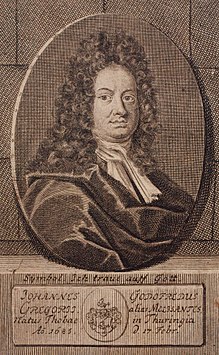 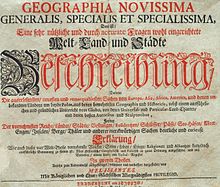 Johann Gottfried Gregorii , rarely Gregorius or Gregory (born  February 17, 1685 in Toba , †  August 4, 1770 in Dornheim ) was a geographer , cartography theorist, historian , genealogist , popular enlightener and Baroque author. He wrote numerous books with geographical content, atlases , travel and regional guides , special encyclopedias, a behavior book or psychology guide , a musicological book and prints with journalistic content. He published most of his works under the pseudonym Melissantes .

Gregorii was born into a pastor's family whose male ancestors had served as Lutheran clergy since the Reformation. After losing both parents early in 1697, the gifted boy got one of the coveted free tables at the Ebeleben monastery school . From 1703 he studied with a princely scholarship at the theological faculty of the University of Jena and was supported by the historian Burkhard Gotthelf Struve , who was important at the time . On November 22, 1705, Gregorii completed his first degree at the Philosophical Faculty of the University of Erfurt as a master's degree.

The young master then first settled in Arnstadt as a candidate for theology and private tutor and married the 15-year-old councilor's daughter Barbara Margaretha Sommer. There he came into contact with the numismatist Christian Schlegel and the historian and hymnologist Johann Christoph Olearius , who gave him access to rare written sources. Another sponsor was the geographer, historian and numismatist Christian Juncker . As early as 1708, at the age of only 23, Gregorii wrote his first geographical work ( Geographia novissima generalis, specialis, et specialissima ), which was followed by numerous others on a wide variety of topics.

With his writing Das now flourishing Thuringia he created one of the first German-language regional and travel guides with information on sights, history, the hotel industry (e.g. Hotel Elephant in Weimar) and libraries (e.g. Bibliotheca Amploniana or the ducal library in Weimar ). With the publication of the Curieusen thoughts of the most distinguished and most accurate country charts in 1713, he became a co-founder of map science and finally initiated the processing of the history of cartography. Gregorii soon cooperated nationally with important copper engravers, art dealers and publishers from the empire such as Johann Baptist Homann and Johann Christoph Weigel in Nuremberg, Johann Benjamin Brühl and Martin Bernigeroth in Leipzig, Johann Adam Jung (Zunners Erben) in Frankfurt am Main or Johann Michael Funcke in Erfurt . His orography, or, description of the most famous mountains in alphabetical order from 1715 is considered to be one of the first special geographic encyclopedias. Between 1716 and 1719 revised Gregorii comprising the well last major cosmography of the Baroque era of Alain Manesson Mallet , the French engineer, military architect, Pagen Hofmeister and mathematics teacher at the court of the Sun King Louis XIV. The opulent second German-language edition of the description of the whole world, circle with 650 copper engravings were published anonymously by the Jung publishing house in Frankfurt am Main in 1719 and marked a high point in Gregorii's work as a geographer. Gregorii always tried to keep his geographical writings up-to-date with current news and first-hand accounts, such as reports from Bartholomäus Ziegenbalg , the first German evangelical missionary in India.

In his Curieusen Affektenspiegel , published in 1715, more than 70 years before Adolph Knigge, he published general rules of conduct for the public, educational advice, recommendations for action for heads of government, principles of professional ethics and early approaches to professional orientation . In this work he already criticized the methods of upbringing, which were still common for a long time. In the musicological treatise Gottgefälliger Glantz der Warheit , the music lover proved the controversial authorship of the eternity song Who knows how close my end to me by Countess Aemilie Juliane von Schwarzburg-Rudolstadt . Only a few years later, Johann Sebastian Bach, of the same age, processed this popular song in three cantatas ( BWV 27 , BWV 84 and BWV 166 ). Gregorii published the extract of his hymnological writing under the pseudonym Tobario in the journal Remarquable Curiosa .

Gregorii's writings contain an impressive abundance of depictions of moving events of his time, for example natural disasters such as earthquakes , floods, storms, celestial phenomena, comets, but also thoughts about numerical mysticism, discussions about eternal life or the competition between technology and nature. He was happy to share his own experiences with readers, such as the display of Siamese twins on the sidelines of the Leipzig Easter fair in 1709.

Gregorii's writings, often published in several editions over the decades, had the character of standard works. In Johann Heinrich Zedler's lexicon , not only did several articles refer to writings by Gregorii, but an article about the universal scholar appeared in them three decades before his death . The excursions he criticized at the time and depictions of his personal perceptions such as nationality stereotypes, job descriptions (e.g. organ builder), a ranking of the best organists (e.g. Bach and his favorite student Johann Ludwig Krebs ), the introduction of coffee or a directory are still informative of beers. When creating his textbooks, compendia or encyclopedias, he drew from the book collections of the ducal library in Gotha and the university library in Jena , used unpublished manuscripts and did not always have successful correspondence with royal houses all over Europe to obtain information. Errors and shortcomings in the sources continued in his books, so that he had to endure violent and sometimes justified criticism. Gottlieb Emanuel von Haller , for example, criticized the description of Switzerland in the Cosmographia novissima with the words: “[...] from p. 801. to 947. there is a rather complicated description of Switzerland. It is full of gross and in part very ridiculous mistakes. "

From 1720 Gregorii was Lutheran pastor in Siegelbach and Dosdorf , from 1733 finally in the marriage church of Bach in Dornheim, where he died in 1770 at the age of 85. 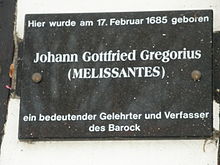 Memorial plaque to Gregorius' place of birth in Toba

In his main creative period, the freelance non-fiction and textbook author informed his compatriots z. E.g. about the English parliamentarism , the Huguenots in France, the life of Tsar Peter I , Louis XIV. And August the Strong , incidents of war or the giving away of the Amber Room , but also discussed occult topics such as Fausten's Infernal Force in the Angermühle at Leipzig the pact with the devil.

His legends were later received by Christian August Vulpius , the Brothers Grimm , Ludwig Bechstein , Achim von Arnim and others.

Before the German collection of sagas known today appeared in 1809, the writer Achim von Arnim, who was friends with Jacob and Wilhelm Grimm , named Melissantes as an important source of legends in a letter to the archaeologist Wilhelm Dorow in Königsberg, which is hardly surprising when you consider that Melissante's legends are important and legends such as B. on the Pied Piper of Hameln , Emperor Friedrich I in Kyffhäuser , Wilhelm Tell , Martin Luther's ink stain on the Wartburg or the story of the Heckthaler with his widely distributed books written in German. In 1829, at the age of 80, Johann Wolfgang von Goethe was still concerned with the Renewed Antiquity (2nd edition 1721) by Melissantes.

Gregorii had already published his wish for German unity to overcome small states in 1708 . A century later, in times of Napoleonic occupation, a society of Weimar scholars around Friedrich Johann Justin Bertuch remembered the all-German perspective of the pioneer: ... just with the otherwise fabulous Joh. Gottfried Gregorius (under the assumed name Melissantes) was already forming Beginning of the XVIII. Century a view that would have been worthy of further pursuit if it had found the same great receptivity everywhere. His curious description of some previously famous, partly devastated and destroyed, but partly rebuilt mountain castles in Germany, combined with his newly opened scene of memorable history, on which the construction and devastation of many famous cities and castles is presented (2. Th. 1715) was calculated for a fatherland that was not restricted by the narrow boundaries of the sovereign territories, but since the fatherland lacked the fatherland, just as man lacked the patriot, the general interest that the patriot wanted to arouse went in the particular, and that particular in the lack of general under ...

Copper engraving frontispiece from MELISSANTES, GEOGRAPHIA NOVISSIMA, part 2, Frankfurt, Leipzig [and Erfurt] 1713 with a depiction of a post station and incoming mail around 1708

His writings provide unique insights into various areas of German cultural and economic history. So he left z. B. in his early geography textbooks not only the depiction of an early modern post station with incoming horse mail (around 1708) as a rare source for German postal history , but also recommended a post horn as a signature for post stations in maps in 1713 , which was briefly described in his ATLAS PORTATILIS GERMANICUS in 1723 German postal system and had two small postal route maps engraved by the Nuremberg engraver Johann Christoph Weigel after Adam Friedrich Zürner for the same work .

During a further study visit to Jena (1718/1719) he also seems to have influenced students. Johann Diederich von Steinen , the author of Westphalian history and general inspector of the Lutheran Church in the county of Mark, counted Melissantes among his important university lecturers during his studies in Jena.

His theoretical approach to career choice, in which, after self-reflection, suitability, inclination, performance and temperament should be taken into account according to the temperament theory of Galen for self-determined optimization of career choice , was centuries ahead of his time. The self-reflexive interpretation of Know yourself based on the oracle of Delphi served Gregorii as a philosophical basis for his idea. Due to this idea, which was still valid today and was visionary at the time, his name was the inspiration for the Melissantum Prize for particularly successful career orientation concepts in German schools.

The state grammar school in Arnstadt is named after Melissantes .