The title of this article is ambiguous. On the Lübeck merchant and councilor see Johann Christoph Weigel (councilor) . 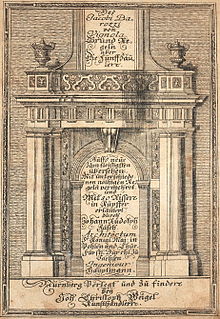 Title copper by Johann Christoph Weigel from: Vignola's Basic Rules on The Five Columns by Johann Rudolph Fäsch, Nuremberg around 1720

Johann Christoph Weigel learned the art of copper engraving from his more famous brother Christoph Weigel the elder . After various stations, including in Augsburg , he acquired citizenship in Nuremberg in 1700 . On November 22nd, 1700 he married Barbara Magdalena Schwab, daughter of the typist and mathematician Michael Schwab.

From 1705 the Weigel family's art shop and apartment were located in Neuen-Gasse at the Spital-Kirchhof. Since 1714 Weigel has been referred to in Nuremberg office books as a copper engraver and art guide. Weigel published and illustrated books by famous authors and musicians such as Leonardo da Vinci , Abraham a Sancta Clara , Johann Pachelbel , Amalia Pachelbel , Johann Leonhard Rost , Johann Gabriel Doppelmayr and Johann Gottfried Gregorii .

The engraver worked particularly in the scraping and line manner. Like his older brother Christoph, he had professional and family relationships with the imperial geographer and cartographer Johann Baptist Homann (1664–1724). Weigel had some of the bibliophile works printed by the important Nuremberg printers Johann Ernst Adelbulner and Lorenz Bieling. At the beginning of the 18th century, Weigel published books for children and young people, specialist literature, sheet music and art books. Several books illustrated and edited by Weigel are among the bibliophile treasures of the 18th century, some of which were reprinted especially in the 20th century , such as the fools satire Centi-Folium Stultorum in Quarto or Hundred Bound Fools, in Folio (1709 ).

Weigel and Gregorii created one of the early German school atlases with the publication of the Atlas Portatilis, or Compendieuse Presentation of the Whole World, in a little cosmography, The Green Youth for the Best ... with copperplate engravings from Homann and Alain Manesson Mallet . Provided with detailed explanations and artfully crafted celestial, world and continental maps as well as map representations of European countries with strong colors, the handy atlas was suitable for both schoolchildren and travelers.

For the second part of the Atlas Portatilis, an atlas of Germany , Weigel and the text author Gregorii chose the map material and the signature system from Adam Friedrich Zürner as a template. In the Continued Atlas Portatilis Germanicus , first published in 1723, the Saxon Post-Chart Extract with a small city view of Leipzig and the small-format maps of the Thuringian-Saxon area are based on Zürner's work. The planned third part with Saxon office maps, the pocket atlases that appeared in several editions, did not materialize.

After his death in 1726, Weigel's publishing house was initially continued by his widow, who still published a number of her late husband's works. Until his wife's death in 1772, son Christoph Weigel (d. 1775) the younger successfully published his father's works, but also made a name for himself through his own book projects, such as the second part of Johann Sebastian Bach's piano exercise . August Gottlieb Schneider (1745–1815) and later his son-in-law Johann Jakob Weinhard managed the traditional publishing house until 1839. Some works from the Weigel publishing house, for example the small-format maps from the two-part Atlas Portatilis, were sold for a century.