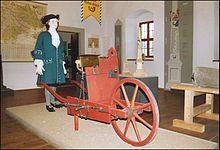 Adam Friedrich Zürner was born on August 15, 1679 in Marieney in Vogtland . His father Adam Zürner held the parish office here from 1674 until his death in 1701, his mother Katharina Barbara was the daughter of the Schönecker pastor Andreas Crusius.

Zürner's first teacher was his father, who taught him reading, arithmetic and Latin. The clergyman Nikolaus Spranger, a friend of the family, also brought him closer to geography, history and the historical sciences. Between 1691 and 1698 Zürner attended the Latin school in Plauen . This was followed by studying theology at the University of Leipzig , where he dealt intensively with mathematics and geography in his free time. The death of his father (1701) forced Zürner to quickly complete his studies, which he finished in 1704 in Wittenberg .

After a short study trip to Bremen and Hamburg , Zürner took up a position as a catechist in Paunsdorf in 1704 . In the following year he took over the pastor's position in Skassa near Grossenhain . In 1706 he married Magdalena Sophie Cadner, who was 10 years his junior and also the daughter of a pastor. The marriage lasted 15 years and had four children.

Zürner had already used the holidays to make his first cards while he was studying in Leipzig. In Skassa he had his parsonage expanded to make room for his hobby: surveying and mathematical geography. The Special Landt Chart of Großenhain , which Zürner had submitted to Elector August the Strong on April 24, 1711, emerged from this surveying work . For this he received 150 thalers and the order to pick up an identical card for the Dresden office.

On April 12, 1713, Augustus the Strong gave him the order to bring all offices of the Electorate of Saxony into Mappas geographicas in the same way as the two maps of the offices of Großenhain and Dresden . Zürner was supposed to complete the survey of the electorate, which was begun in 1586 by the Markscheider Matthias Oeder under Elector Christian I , but was not completed due to the Thirty Years War, as the second land survey of the Electorate of Saxony.

Zürner, with the title of “Land and Border Commissioner”, was able to present his “New Chursächsische Post-Charte” in the late autumn of 1718. In order to do this job, he constructed a geographic measuring vehicle with which very precise measurements could be carried out. This was a carriage in which a linkage transmitted the revolutions of the rear wheel to a counter. Zürner covered about 18,000 miles with his measuring vehicle.

As a result of this survey, the stone so-called Saxon post mile columns were erected in the Saxon cities and along the post roads from 1721 . The hours indicated on the columns in no way correspond - as is often assumed - to the average "stagecoach travel time", but are distances. An hour's walk corresponds to around 4.5 km, i.e. the distance that can be covered on foot in one hour. During the survey work were u. a. Johann August Richter , Paul Trenckmann and Johann Valerian Fischer were assistants of Zürner. But relatives such as his brother Carl Friedrich Zürner and Johann Friedrich Zürner were employed by him as conductors from 1729–1735 .

After being appointed "Land and Border Commissioner", Zürner gave up his position as pastor and moved to Dresden. His wife died on May 22, 1721 in Skassa. His four children also died there, which is still reminiscent of a tomb for three children in the church's patronage box. His life was not an easy one during the several years of surveying work, as the electoral administration paid the agreed salary of 600 thalers only slowly. Needs and financial worries determined the surveyor's life. In stark contrast to this was the recognition he received. As early as 1716 he was awarded the title of "Electoral Saxon and Royal Polish Geographer". In the same year he was appointed a member of the Prussian Academy of Sciences .

The geographer Johann Gottfried Gregorii alias MELISSANTES and the copper engraver Johann Christoph Weigel from Nuremberg used the good map material and Zürner's signature system as early as 1723 to create the continuous ATLAS PORTATILIS GERMANICUS. In particular, the Saxon Post-Chart Extract with a small city view of Leipzig and the small-format maps of the Thuringian-Saxon area in this school and travel atlas are based on Zürner's work. The planned third part with Saxon office maps, the pocket atlases published until the end of the 18th century, did not materialize.

In 1722 Zürner married again in Dresden. His wife Juliana Christiane (last name not known) died in 1728, and the son from the marriage was only five years old. In 1729 Zürner married for the third time. With his wife Agnes Eusebia Kenzelmann he had two sons, of whom only Adam Friedrich, born in 1730, survived his father.

In addition to his surveying work, which Zürner expanded to include Thuringia in the 1730s , he wrote several travelogues and travel guides in the last years of his life. Zürner died on December 18, 1742 in Dresden and was buried in the Inner Neustädter Friedhof there. 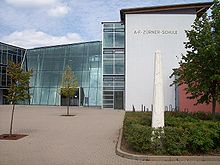 Today he is considered a well-known German cartographer. His best-known works were the "Neue Chursächsische Post-Charte" (16 sheets) and the "Atlas Augusteus der Chursächsische Lande" ( Atlas Augusteus Saxonicus : 40 general and 40 special maps), two original copies of which are available in the Saxon main state archive in Dresden Maps after his death without naming him as the author, e.g. Partly reworked by his colleague Paul Trenckmann and his son when atlas Saxonicus novus were published several times by publisher Peter Schenk in Amsterdam ( Schenk's Atlas ).

Today streets in Skassa and Marieney bear his name as well as the branch in Oelsnitz of the vocational school center Reichenbach in Vogtlandkreis .