Oelsnitz is located in the Saxon Vogtland and on an old trade route between Plauen and Eger . The White Elster flows on the edge of the city center . The city is located in the west of the Vogtlandkreis and in the Saxon part of the historical Vogtland. Oelsnitz / Vogtl is geographically located. in the center of the Vogtland natural area (transition from the Mittel Vogtland hilltop to the Upper Vogtland ).

Oelsnitz / Vogtl. is centrally located in the Vogtlandkreis and borders on seven other municipalities in the district.

The first settlement of the region, like the place name, is of Sorbian origin. The name is derived - as with Oelsa - from the Old Sorbian olešnica , "settlement or brook at the alder forest" ( olša = "alder", cf. Obersorb . Wólša ). Oelsnitz was first mentioned in a document in 1200, the first mention of the Jakobikirche took place in 1227. In the years 1232 to 1248 the bailiffs of Straßberg built the Voigtsberg Castle , which later became Voigtsberg Castle. Between 1327 and 1356 the city was laid out as planned. The first documentary evidence of the town charter in Oelsnitz comes from the year 1357. In that year the town and castle Voigtsberg came from the possession of the Plauen bailiffs to the Wettins as a result of the Vogtland War . In the Schmalkaldic War , the Ernestine Wettins lost the Burgraviate of Meissen to the family of the bailiffs of Plauen after the Catholic imperial army under the Bohemian military leader Sebastian von Weitmühl defeated the Electoral Saxon troops of the Protestant Wettins in the battle of Oelsnitz on November 1, 1546. Oelsnitz came back under Vögtic rule until they finally lost the rule of Voigtsberg including Oelsnitz in 1563 to the Albertine Wettins . On August 13, 1632, during the Thirty Years' War , the troops of General Heinrich von Holk captured the city, which was sacked and burned down. Many residents, including those who fled to church, were killed. In 1724, a Saxon post-mile column was erected in front of the Obertor, which last stood at the town hall until the town fire in 1859 . Its replica was built on Pfortenstraße in 2018.

Oelsnitz was persecuted by witches from 1654 to 1658 . A woman and her daughter as well as a cow boy got into witch trials. In addition, between 1678 and 1688 there were also persecutions of witches in today's districts of Magwitz and Voigtsberg. Maria Magdalena, 19 years old, wife of bailiff Hans Thomas Raßenhauer, got into a witch trial and was sentenced to expulsion from the country.

Until 1856, Oelsnitz belonged to the Electoral Saxon or Royal Saxon Office of Voigtsberg . In 1856 the city became the seat of the Oelsnitz court office and in 1875 the Oelsnitz administration . In June 1927, Oelsnitz was the first municipality in Germany in which Otto Karl Bachmann, a member of the Communist Party, was elected mayor.

In the 14th century industrial development began with textile crafts and mining (copper, iron, tin). The textile industry was the whole Vogtland from the 16th century increasingly become a supporting industry. In the 15th and 16th centuries there was also pearl fishing in the White Elster and its tributaries. Oelsnitz received a railway connection in 1865 with the Herlasgrün – Falkenstein – Oelsnitz – Adorf – Eger ( Voigtland State Railway ) line. The use of the railroad has made it much easier to obtain raw materials or semi-finished products and to ship the products produced. This also promoted the industrialization of the Vogtland. The Oelsnitz (Vogtl) train station developed into a local railway junction with the opening of the Plauen – Oelsnitz connection. Today, however, only the Plauen – Oelsnitz – Cheb line is still in operation; the section towards Falkenstein was shut down and dismantled in 1951.

In 1880 Karl Wilhelm Koch and Fritz te Kock founded Koch & te Kock as a weaving mill for Axminster carpets. In the same year, the company established a branch for carpet production in Oelsnitz and the surrounding area, including Adorf . With the establishment of the brand "Halbmond" was established. Due to the rapid development of carpet production in Oelsnitz, the place became a "carpet city" and developed into the largest production location in Germany. The company was awarded a gold medal at the International Building Exhibition in Leipzig in 1913 . Further awards at exhibitions and fairs in Chicago and Antwerp followed. The companies Koch & te Kock, Adoros and Tefzet were merged in 1953 to form VEB Halbmond . During the GDR era, all carpet weaving mills were combined to form the VEB Halbmondteppich in the VEB Kombinat DEKO Plauen. The company has been operating as Halbmond Teppichwerke GmbH since 1990 . The wool and linen processing, the curtain industry (VEB Plauener Gardine, parent company in the VEB Kombinat DEKO Plauen) and machine embroidery were also not insignificant. To a lesser, but not insignificant extent, cotton processing, the clothing industry , including corsetry , and other textile industries were also represented here. Textile machines were also manufactured in Oelsnitz.

Oelsnitz / Vogtl. is fulfilling municipality of the administrative community Oelsnitz / Vogtl. She is a member and one of the initiators of the Czech-German microregion Friends in the heart of Europe .

Since the city ​​council election on May 26, 2019 , the 22 seats of the city council have been distributed among the individual groups as follows:

Blazon : In gold, a black lion with a red tongue and armor , accompanied by three black balls. The oldest seals showing this picture date from the 15th century. The three balls are interpreted as riveting points .

Oelsnitz's twin cities are Rehau in Bavaria, Aš in the Czech Republic and Fiumefreddo di Sicilia in Italy.

After the GDR joined the Federal Republic of Germany in 1990, the "Johannisberg" industrial area was developed in 1991/1992 on 72 hectares in the north of Oelsnitz near the Plauen-Süd motorway junction. At the moment, nonwovens for vehicle interiors, lattice and sheet metal profile gratings, office furniture and - following tradition - corsetry are manufactured in Oelsnitz .

The most famous companies in the city are the Halbmond Carpets at the train station, once the VEB Halbmond. After an extensive investment program from 1994, Halbmond was bought by the British Allied Textile in 1996. In 2004, the company was converted into a manufacturer of high-quality contract carpets and the focus on carpet spray printing. The managing director Ralf Litzenberg and the authorized signatory Martin Scheel acquired the entire company shares in 2007; at the same time, the largest investment program since 1994 was decided. In 2008, the world's most modern Chromojet printing system went into operation at Halbmond. This technique of injection printing also allows small quantities to be produced economically at a high quality level. The result is hard-wearing contract carpets that are manufactured according to the individual requirements of the customer.

The largest employer in the region is the Gebr. Meiser company , which is based in the Johannisberg industrial area. In July 1994 the plant in Oelsnitz was completed and later expanded considerably. The company premises cover around 150,000 m² with a total of 30,000 m² of production and storage facilities. The production program includes gratings, which are manufactured on eleven production lines , as well as steel stair systems and tools. 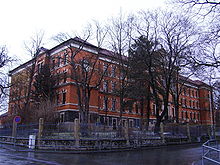 → Main article : List of personalities from the city of Oelsnitz / Vogtl.

Wikisource: Manors and castles in the Kingdom of Saxony: Untermarxgrün  - sources and full texts

Wikisource: Manors and castles in the Kingdom of Saxony: Raschau  - sources and full texts