Markneukirchen is a town in the Saxon Vogtlandkreis . It is located in the Elster Mountains between the Ore Mountains and the Fichtel Mountains and is one of the main locations in the Musikwinkel . 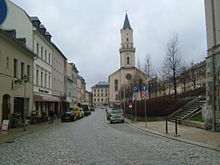 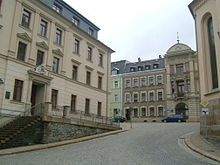 Markneukirchen is one of the southernmost Saxon cities in the upper Vogtland . On both sides of the Schwarzbach , a right tributary of the White Elster and its side valleys, the city and its associated corridor spread over the northern and southern mountain ridges. To the south of the city are the districts of Schönlind, Landwüst and Wernitzgrün above and away from the Schwarzbachtal. The entire urban area is drained by tributaries of the Elster. It lies at an altitude of between 468 m in the Siebenbrunn district and 803 m on the Hohen Brand .

The following districts belong to the city of Markneukirchen:

The climate of the area is cool according to the altitude. The mean annual temperature is 6 °, the amount of precipitation around 700 mm.

Markneukirchen 1628 after a pen drawing by Wilhelm Dilich

The settler village of Nothaft , founded in the 13th century, was initially named after a knightly family from Egerland - Albertus Nothaft de Wildstein (see also the Notthracht family ) led Bavarian / Upper Palatinate settlers to this area as a locator . This name was also mentioned in a document from 1378 ( Nuwenkirchen dictum Nothaft ). The place name Neukirchen first appeared around 1274, going back to the founding of a church, in a document from the Waldsassen monastery in which a Chunradus de Newenkirchen was mentioned, probably the owner of the local knight's seat .

In 1357 ( Nuenkirchin ) and 1360 ( stat ) the place appeared as a market with the same rights as the probably older neighboring towns of Adorf and Oelsnitz . The founders of the market were the bailiffs of Plauen (probably Heinrich the Elder or Heinrich the Long), who wanted to consolidate their power against the Wettins through a planned urban policy . Towards the end of the Thirty Years War , in the course of the Counter Reformation, Bohemian exiles moved to Markneukirchen for reasons of faith. Among them were 12 violin makers from Graslitz . In 1677 these masters united to form Germany's first violin making guild. This started the tradition of making musical instruments in Markneukirchen. Until then only violins were made, but workshops for all types of orchestral instruments followed after 1700. A string makers guild was founded in 1777, and in 1797 the French horn and pipe makers merged to form the Musical Instrument Makers Society. The importance of Markneukirchen as the center of the Vogtland musical instrument industry with far-reaching export relations is underlined by the fact that the USA maintained a consular agency here from 1893 to 1916 . In the first half of the 19th century, the Markneukirchen plucked instrument building established itself. Around 1900 around 50 percent of the world's instrument and component production came from Markneukirchen and the surrounding area. There is no verifiable evidence for a share of 80%, of which one can read from time to time.

On the night of April 22nd to 23rd, 1840, 171 residential houses, 140 barns and 258 side and back buildings fell victim to a terrible fire along with the public buildings. More than half of the city - especially the oldest part - was destroyed. The reconstruction was carried out very quickly and changed the appearance of the place permanently. The city was rebuilt generously, but often more soberly, but now offered sufficient space for the population and industry to grow.

The current spelling of the place goes back to the year 1858, in which the common name Markt Neukirchen was changed to Markneukirchen by a royal decision from Dresden , omitting the t in the place name , in order to prevent confusion with other Neukirchen. Until 1856, Markneukirchen belonged to the Electoral Saxon or Royal Saxon Office of Voigtsberg , after 1856 to the Markneukirchen court office and from 1875 to the Oelsnitz administration (from 1939 "Oelsnitz district").

Since the municipal council election on May 26, 2019 , the 18 seats of the city council have been distributed among the individual groups as follows:

Andreas Rubner (since July 2015), non-party . The predecessor in office was Andreas Jacob (CDU).

The founding of the bailiffs is also shown in the city coat of arms. Similar to the coats of arms of Plauen and Adorf , it shows the coat of arms of the Plauen bailiffs: a golden lion raised to the right with a double tail and a flapping tongue.

Every year young musicians come to the center of German orchestral instrument making thanks to the international instrumental competitions ( Musiktage ) that take place in Markneukirchen . By resolution of the city council of Markneukirchen on December 12, 2002, the studied orchestral musician, music teacher, long-time director of the Markneukirchen music school and conductor of the symphony orchestra Wolfgang Wolfert "due to his decades of meritorious work as a music teacher and conductor of the city symphony orchestra" became on March 15, 2003 City Music Director appointed. He succeeds the music teacher, composer and arranger Albrecht Herrmann, who was given this honor as the first conductor after 1990. In March 2017, the Markneukirchen high school teacher, musicologist and orchestra conductor Enrico Weller was appointed as the new town music director. Thus, for the first time in the history of Markneukirchen, there are two personalities who carry this title at the same time.

Markneukirchen has two soccer fields, two sports halls, one of which was only completed in 2007, and an outdoor pool (which was renovated in summer 2013) with a 10-meter diving platform.

Sports can be played in several clubs:

Markneukirchen is located on the federal road 283 from Adorf / Vogtl. leads via Klingenthal into the Ore Mountains to Aue .

Radio station Markneukirchen . During the GDR era, there was a medium-wave transmitter that was broadcast on 1089 kHz and 1341 kHz with 1 kW ERP each.

→ Main article : List of personalities from the city of Markneukirchen