Tirpersdorf is a municipality in the Saxon Vogtland district . The place is the seat of the administrative association Jägerswald and is located around eleven kilometers southeast of the district town of Plauen . The geographical center of the Vogtland district is in Tirpersdorf.

Location of the Tirpersdorf district within the municipality

The community is made up of eight official districts, one of which is Tirpersdorf itself. The other districts - with the exception of Brotenfeld, which came to Tirpersdorf in 1950 - were incorporated in 1994. Apart from Juchhöh, each district also forms its own district. These are shown on the map. The following table covers these eight parts of the municipality with some related information:

Precipitation diagram for Tirpersdorf based on the measurements between 1961 and 1990.

Tirpersdorf is with the humid climate in the moderate climate zone , whereby a transition to the continental climate is noticeable. The nearest weather station is in Hof , to which the following values ​​refer.

The annual rainfall is 749 mm. Most precipitation falls in the months of July (91 mm) and August (77 mm). The month of April recorded the lowest rainfall with 42 mm. There are 198 rainy days in the course of the year . Most of these are recorded in December and March (19 each) and the least in August and September (14 each). 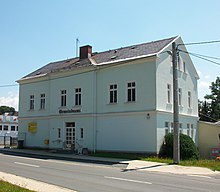 Tirpersdorf was first mentioned in 1264 as Tirpenstorf . The place name Tyrpenstorf has been handed down for the year 1267 . In 1400 Tirpestorff was named. Another name variant comes from the year 1445, when Tirpirstorff was mentioned. For 1557 Tirpersdorff is documented as the common spelling of the place name. A pilgrimage church was first mentioned in Tirpersdorf in 1268. It was maintained by the Teutonic Knight Order and was subordinate to the Theumaer church as a branch church . In the 15th century the village was affected by the Hussite Wars (1419–1436), and in the Thirty Years' War (1618–1648) there was renewed destruction. During this time the plague also claimed numerous deaths, 1633 alone from Tirpersdorf died of this disease.

In the early modern period , Tirpersdorf was administered from the Voigtsberg manor . In the 14th century the place belonged to the Castrum Voigtsberg, in the middle of the 16th century Tirpersdorf was then part of the Electoral Saxon or Royal Saxon Office Voigtsberg until 1856 . Before Tirpersdorf was given independence as a rural community by the Saxon rural community order in 1838, the place was characterized by the feudal system . The basic rule exercised in 1542 four different landlords, the parish Oelsnitz, the sovereign, the Tirpersdorfer manor or Vorwerk and the manor Mechelgrün nether part of. Their rule extended to 31 possessed men and two cottagers in 1583. After the end of the Seven Years' War (1756–1763) there were 32 possessed men in the village, who farmed 3 1 ⁄ 6  hooves of 30 bushels each and partly owned by the sovereign and were subordinate to the local manor. In the course of the rural community order, Tirpersdorf received a local council that was elected on March 26, 1839. From 1856 the village was subordinate to the Oelsnitz court office and after 1875 the administration was then incumbent on the Oelsnitz administration .

From 1837 the children of the village could be taught in a new school building. Until 1872, lessons were only given by one teacher, but because of the high number of students, an assistant was employed. On July 7, 1879, a new, larger school building was opened. Today it serves as the seat of the municipal administration. From the middle of the 19th century, a fire brigade has been handed down to the town. Around 1860 there was also the first business in Tirpersdorf, around the turn of the century more and more shops and businesses opened in the village. In 1900 a 479 hectare large corridor stretched around the square village Tirpersdorf , which was used for agriculture by the population of the village. In the same year the parish separated from Theuma and built its own rectory two years later. From 1910 on, associations developed in Tirpersdorf, for example represented by cycling clubs and a women's gymnastics association. There was a women's association in Tirpersdorf since 1880. 22 Tirpersdorf residents died during the First World War . The population increased steadily: in 1834 there were 505, in 1890 already 757 and in 1925 1012 people. Of these just over 1000 people, the vast majority belonged to the Evangelical Lutheran parish in the village. 15 people were catholic , 13 were of other or no denomination. Tirpersdorf has an address book from 1929 with 282 entries.

After the Second World War , which claimed 65 lives in Tirpersdorf, Saxony came to the Soviet occupation zone and later to the GDR . On July 1, 1950, the municipality of Brotenfeld was incorporated into Tirpersdorf. The historically grown affiliation to Oelsnitz was retained even after the territorial reform in 1952 , which Tirpersdorf assigned to the Oelsnitz district in the Karl-Marx-Stadt district (formerly Chemnitz ). Rural life in Tirpersdorf was now based on the principle of agriculture in the GDR , including the expropriation of six farms.

From 1951 wolframite was mined again in Tirpersdorf . This raw material was already valuable for armaments projects during the First World War and created work in the area. The mine remained in operation until 1957. During the GDR period, there were some new buildings in Tirpersdorf, the most important of which is still the Tirpersdorf outdoor pool , which opened in 1979 . It has a swimming pool with a small slide and a children's playground.

After German reunification , Tirpersdorf came to the re-established Free State of Saxony. Since the community with its almost 900 inhabitants was too small to remain independent, it merged with the communities of Droßdorf and Lottengrün and their districts with effect from January 1, 1994. Since then, Tirpersdorf has eight parts of the municipality. The following regional reforms in Saxony assigned Tirpersdorf in 1994 to the Vogtlandkreis (vehicle registration number: V ), which was enlarged in 2008 to include the formerly independent town of Plauen.

On December 25, 1998, the municipalities of Bergen, Theuma, Werda and Tirpersdorf founded the Jägerswald administrative association based in Tirpersdorf. A merger of the four communities into a larger one has been discussed more often since then.

The following table shows the population of the rural community Tirpersdorf according to the respective territorial status. Jumps result from the incorporation in 1950 and 1994. All figures from 1964 onwards refer to December 31 of the respective year.

Parts of this article seem out of date as of 2019 .
Please help to research and insert the missing information .

The honorary mayor of Tirpersdorf is Reiner Körner. He was re-elected in June 2015.

As in many other cities in Saxony, Tirpersdorf was a textile industry location from the end of the 19th century . So an embroidery developed in the village early on . Today three Tirpersdorf companies are still active in the textile industry: Pfeiffer embroidery, Edi Michel Weberei GmbH and Vogtländische Heimtextilien GmbH. The latter company employs around 50 people. The remainder of the municipality's corporate landscape consists of small craft businesses and service companies as well as restaurants.

In terms of traffic, Tirpersdorf is opened up by three state roads. The state road 312 connects the community with Theuma and the federal road 169 east of Plauen. In the other direction, the S 312 leads to Oelsnitz and from there to federal highway 92 . This federal road can be used to access the federal motorway 72 (Hof - Leipzig ), which runs roughly in a north-south direction between Plauen and Tirpersdorf. State road 303 also leads to Oelsnitz, but also via Werda in the direction of Falkenstein / Vogtl. State road 315 runs exclusively through the municipality of Tirpersdorf and connects Schloditz with Droßdorf, Lottengrün and Tirpersdorf.

The Lottengrün district had a train station on the Herlasgrün – Oelsnitz railway line until 1970 . A branch line, which was laid out as an industrial line for the Theuma slate quarries, branched off there and was later extended to Plauen. The traffic was also stopped here in 1970.

Wikisource: Manors and castles in the kingdom of Saxony: Schloditz  - sources and full texts

Wikisource: Manors and castles in the kingdom of Saxony: Brotenfeld  - sources and full texts

Wikisource: Manors and castles in the kingdom of Saxony: Tirpersdorf  - sources and full texts