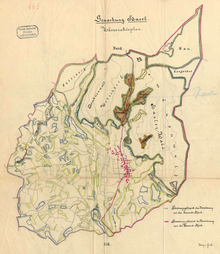 A district (also denunciation , in Switzerland also Gemarchen in Austria Cadastral ) is a unit area of the real estate cadastre . The ownership structure of the individual parishes is recorded in the land register. The district forms a property association from a larger number of usually contiguous properties or parcels . Between parcels and their district nearly always the plane located hallway .

General connections between the district and the municipality

The name of a district usually corresponds to the name of the settlement on it . This is an indication of socio- historically significant, historically evolved relationships that exist between the area of ​​responsibility z. B. a political municipality (municipality territory) and a certain property association (district) exist.

A district is not an administrative unit . Nevertheless, the boundaries (and mostly also the names) of the modern administrative units (boundaries of a municipality, a city district, city or district ) often coincide with those of a district. However, when the were incorporations since the 1970s, the districts of the merged municipalities often no longer united, today Gemeindegebiete often why several districts (or - in Austria - cadastral) have. In earlier parishes, however, the districts were often merged.

Marking of the district

The municipal coat of arms of Bobenheim contains a district sign

The boundaries of the district are marked with landmarks , which are traditionally provided with the initials of the place names or individual district symbols. These geometric figures, similar to house brands, served as the basis for the municipal coat of arms in many places and thus developed into common figures in heraldry .

Originally, the (ge) mark meant “limit”. Later, the word content "community area" developed (in addition to property association, this could also mean tax district, district of the community court and many other things ) or "certain community-free area " (ausmärkisches area). As a rule, the landmarks were precisely documented and delimited with natural and later artificially set marks. The tradition of many communities was the annual "downfall", (also: Schnadegang ) that is the pacing and checking of the district boundary.

Landmarks in today's sense have existed since the introduction of the realm cadastre by the Land Estimation Act of 1934. They replaced the tax districts .

In numerous cases it also happens that parts of a district belong to different political communities or community-free areas. Such cases are historically caused by the dissolution of municipalities through municipal area reforms and, especially in Bavaria, by the dissolution of unincorporated areas or the incorporation of parts of unincorporated areas into neighboring municipalities, whereby the district boundaries that originally followed the municipal boundaries were retained. Of the 7804 districts in Bavaria, 522 belong to two municipalities or unincorporated areas, 67 to three, 19 to four, and one to five. In the latter case, it is the area "Forstmühler Forst" in the district of Regensburg , which belongs to the communities Altenthann , Bach an der Donau , Brennberg , Wiesent and the community-free area Forstmühler Forst .

Another specialty is the Tägermoos , which belongs to Switzerland under constitutional law and forms part of the municipality of Tägerwilen and at the same time represents a district of the German city of Konstanz .