The district office of the Vogtlandkreis in Plauen, a former department store

The Vogtlandkreis is a district in the southwest of the Free State of Saxony . The district town is the city ​​of Plauen , which was free until 2008 .

The Vogtlandkreis is located in the Saxon Vogtland . With its southern part, the area of ​​the district is part of the Erzgebirge / Vogtland Nature Park . There are the southwestern foothills of the Erzgebirge ( Westerzgebirge ) and the Elstergebirge . It is therefore largely characterized by a low mountain range that flattens out to the west and north. The most important rivers are the Zwickauer Mulde and the White Elster . The highest mountain is the snowfall . The Erzgebirge ends in Erlbach with the Hohen Stein .

See also : List of landscapes in Saxony  and natural areas in Saxony

The Vogtlandkreis was created on January 1, 1996 by amalgamating the districts of Auerbach (license plate AE), Klingenthal , Oelsnitz (both OVL), Reichenbach (RC) and Plauen (PL).

The formation of a Vogtlandkreis with the seat of the district administration in the independent city of Plauen, which does not belong to the Vogtlandkreis, was already provided for in the original draft law of the Saxon state government of June 29, 1992. It should be done by amalgamating the aforementioned counties.

Due to the intense influence of the Auerbach CDU district association and the local district administrator Winfried Eichler , who insisted on the formation of two districts, it was decided in Dresden that the economically weaker district town of Auerbach should become the seat of the district. In the meantime, Plauen had surprisingly made friends with the two-circle variant.

As part of the legislative process, the creation of two districts, the Elstertal district based in Plauen (districts Plauen Land and Oelsnitz and parts of the district of Klingenthal) and the Göltzschtalkkreis based in Auerbach (districts of Auerbach, Reichenbach and other parts of the Klingenthal district) was favored . This variant was also decided in the District Reform Act of June 24, 1993.

However, at the request of a citizens' initiative led by the non-attached District Councilor Volker Liskowsky, the district council of the then Reichenbach district lodged a constitutional complaint with the Saxon Constitutional Court against this regulation, which ruled that this decision was null and void.

On August 1, 2008, as part of the Saxony district reform in 2008, the Vogtland district was enlarged by incorporating the previously independent city ​​of Plauen, where the district administration was already located. The associated revocation of the status as an independent city took place against massive resistance from Plauen. The district has an area of ​​1412 km². Its population on December 31, 2015 was 232,318.

Today's Vogtlandkreis corresponds to the area of ​​the Electoral Saxon Vogtland District , apart from minor deviations . A small part in the northeast, mainly Neumark , belonged to the Erzgebirge district.

Distribution of seats in the district assembly of the Vogtlandkreis after the election on May 26, 2019

Distribution of seats in the
Vogtland district assembly after its constitution on September 12, 2019
A total of 86 seats

In the district election on June 7, 2015, Rolf Keil (CDU) prevailed against two competitors with 56.9% of the votes in the first ballot. Before that , Tassilo Lenk had been its district administrator since the formation of the Vogtlandkreis, even before the district reform in 2008 .

At the federal level, the Vogtlandkreis and the formerly independent city of Plauen form constituency 166 .

The lion as the actual heraldic animal of the Vogtland corresponds to the Bavarian or the Palatinate lion. It was featured in the coat of arms during the medieval rule of the bailiffs of Weida , Gera and Plauen and their successors since the 13th century. The black imperial eagle to the realm country character of other parts of the former Vogtlandes ( Egerland , Regnitzland remember).

The Göltzschtal bridge as a landmark for tourism in Vogtland

In addition to the baths in the health resorts of Bad Elster and Bad Brambach , the manufacture of musical instruments in the so-called music corner and tourism - especially winter sports - play an important role. In the Plauen area, the textile industry (Plauener Spitze), printing machine construction and the vehicle industry (buses) are also important.

In 2009, the Vogtlandkreis was named “Municipality of the Year” in the Grand Prize for Medium-Sized Enterprises competition.

In the future atlas 2016 , the Vogtlandkreis took 342th place out of 402 rural districts and urban districts in Germany, making it one of the regions with “future risks”.

In the ZDF "The Great Germany Study 2018", the Vogtlandkreis took 97th place out of 401 districts and cities in Germany.

In Vogtlandkreis there are 14 hospitals, including a hospital of specialized care and a specialist clinic . The Vogtlandkreis tries to attract doctors to the region with the program “Doctors for Vogtland”.

There are MVZs of the Paracelsus clinics in Adorf, Reichenbach and Schöneck, there are others in Ellefeld, Klingenthal and Plauen.

Motorway bridge over the Pöhl dam

The A72 federal motorway crosses the Vogtland in the north. There are also several federal highways. Several road border crossings connect the Vogtlandkreis with its Bohemian neighbors.

On January 1, 1996, the district kept the distinctive signs of the previous districts AE (Auerbach), OVL (Obervogtland; Klingenthal and Oelsnitz), PL (Plauen) and RC (Reichenbach). These were replaced on March 1, 1996 by the new distinguishing mark V. It is still issued today. On January 1, 2009, the city of Plauen also lost its PL.

Since November 9, 2012, the distinguishing marks AE, OVL, PL and RC are available again in connection with the license plate liberalization .

Traditionally, there is a close-knit rail network in the Vogtland. However, this network has been heavily thinned through a number of line closures. The following route sections used in local rail transport are located in the Vogtland district:

All routes are served at least every two hours, most every hour. The operator of many transport facilities is the private Vogtlandbahn , which has been operating regional trains on the modernized branch lines of the Saxon Vogtland since 1996 . A regional express , DB Regio Südost, commuted three times a day on the Adorf - Plauen - Leipzig route . There was also an offer similar to long-distance transport, the Franken-Sachsen-Express, which connected Nuremberg and Dresden via Plauen and Reichenbach. It was created when the ICE traffic on the Saxony-Franconia Magistrale was discontinued when the timetable was changed in December 2006 . Since then, Deutsche Bahn's InterRegioExpress trains have been running every two hours . With the timetable change in December 2007, the Regional Express Dresden - Hof was extended to Nuremberg due to the high demand, so that hourly connections Dresden - Reichenbach - Plauen - Nuremberg were available. Since June 2005 the Vogtlandbahn has also offered a daily long-distance train (Adorf–) Plauen - Berlin, the so-called Vogtland Express . This attractive offer replaced the previously discontinued InterRegio and was very well received by the population. Between February 16 and April 8, 2009, the connection was temporarily suspended for economic reasons. The Vogtlandbahn closed the railway connection on October 1st, 2012. The route is currently served by bus.

The disused section Hammerbrücke - Schönheide Süd is used as a tourist route on weekends by a motorized trolley.

The largest expansion measure in recent years is the electrification of the Reichenbach - Hof section. It is the basis for integrating the city of Plauen into the network of Central Germany's S-Bahn with continuous trains, as diesel vehicles are not permitted in the new Leipzig City Tunnel . As the special purpose association for local public transport Vogtland (ZVV) has not yet participated in the financing and there are vehicle bottlenecks in the S-Bahn, implementation is currently not in sight. Until then, there are only transfer connections to Leipzig via Werdau or Zwickau Hbf .

96% of the settlement area is supplied with public transport , so that all places that have no rail connection can be reached relatively easily by buses, at least on weekdays. There are also city transports in Auerbach , Reichenbach , Klingenthal and Plauen , where this is organized by the Plauener Straßenbahn GmbH with buses and trains. In recent years, interfaces between train and bus lines have been increasingly built at the stations, which make it easier to change trains and improve the range of rail and bus services through the implementation of the network concept.

The closest airfield is the Hof-Plauen airfield near the Bavarian Hof . Auerbach airfield ( ICAO code EDOA ), which was expanded in 2005, is located near Auerbach . 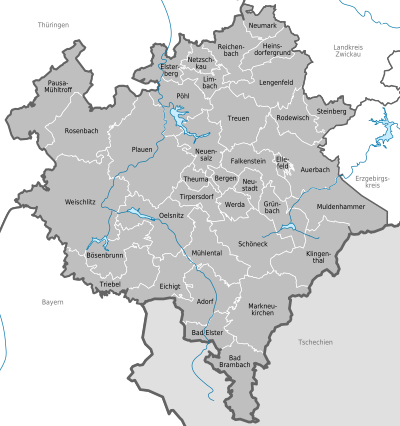 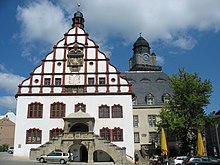 Plauen is the town in the Vogtland district with the largest number of inhabitants, around 66,000 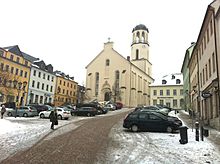 Auerbach (picture of the market square) and Reichenbach follow with around 20,000 inhabitants

Oelsnitz is the fourth largest city with approx. 11,000 inhabitants

Changes since the district was founded

On January 1, 1999, several parishes were incorporated into others or they merged with other parishes. In detail this concerned:

On January 1, 2013, the Pausa administrative community was dissolved and the town of Mühltroff became the town of Pausa / Vogtl. incorporated. The resulting unified community bears the name Pausa-Mühltroff . In addition, Zwota was incorporated into Klingenthal .

There are 39 designated nature reserves in the district (as of February 2017).

See also : List of nature reserves in the Vogtland district

Counties and cities in Saxony

See also : List of administrative districts and cities in Saxony