The Helios Clinics Group is one of the largest providers of inpatient and outpatient care in Europe. In Germany, Helios had 86 clinics in 2019, including seven maximum care hospitals in Erfurt , Berlin-Buch , Wuppertal , Schwerin , Krefeld , Wiesbaden and Duisburg . The clinic group also has 120 medical care centers (MVZ) and ten prevention centers. Every year around 5.2 million patients are treated in Germany, 4 million of them as outpatients. The clinic company employed more than 66,000 people in 2017 and generated sales of around 6.1 billion euros in 2017. The subsidiary TIPP, which handles the logistics in the Helios clinics, belongs to the group . TIPP is split into the areas of catering , service and hospital technology. The pick-up and delivery service is carried out by TIPP in many stores.

Lutz Helmig laid the foundation stone for his clinic company in 1987 when he founded the hospital company Dr. Helmig mbH in Lauterbach (Hesse) . In the same year Helmig founded the Asklepios Clinic Group together with the lawyer Bernard Große Broermann , named after the Greek god of healing Asklepios . In 1994 Helmig separated from the Asklepios-Kliniken group. He became managing director of the hospital company Dr. Helmig GmbH , which was renamed Helios-Kliniken GmbH in 1995 , whose name is made up of the three first letters Helmig ("Hel") and the last three letters from Asklepios ("ios"). From 1994 to 1999 he was managing partner of 'Helios-Kliniken GmbH'. In 2001 he retired from operational business.

At the end of 2004, the company included 25 hospitals, mostly in Germany. The annual turnover exceeded 1.1 billion euros. On October 14, 2005, Fresenius SE announced the takeover of Helios-Kliniken GmbH . Fresenius acquired 94% of the Helios shares from the Helmig family of founder Lutz Helmig for a purchase price of 1½ billion euros. The Wittgensteiner Kliniken GmbH were integrated into the Helios-Kliniken Group and operates from the beginning of 2008 under the name Helios. In Bad Berleburg , one of five of these clinics, the cardiovascular clinic, was closed at the end of 2011.

On March 20, 2006, Helios acquired the majority in Humaine-Kliniken GmbH , an operator of six clinics with acute medical care and special rehabilitation in the areas of neurology , oncology and traumatology with a total of 1,850 beds, of which 1,530 in the acute area, and around 2900 employees. The largest of these clinics is the Vogtland Clinic in Plauen . The oncological specialist clinic in Dresden-Wachwitz was closed in 2009, the staff and the care contract was taken over by the Dresden-Friedrichstadt municipal hospital .

In December 2006, Helios relocated its previous headquarters from Fulda to Berlin-Mitte on Friedrichstrasse. Today, Francesco De Meo is Chairman of the Management Board / CEO of the Helios-Kliniken Group and at the same time a member of the Management Board of Fresenius SE . Since January 1, 2008, Fresenius Helios has been a separate division. The former mezzanine level Fresenius Proserve GmbH was dissolved.

After Fresenius tried unsuccessfully in 2012 to acquire 90 percent of the shares in Rhön Klinikum AG , the purchase of 43 Rhön clinics and 15 Rhön MVZs for a purchase price of 3.07 billion euros was announced in September 2013, subject to antitrust law Approval as well as, in individual cases, the approval of former municipal owners or current minority shareholders. The planned purchase was later reduced to 40 hospitals and 13 medical supply centers and after the transfer of two former Helios clinics in the Leipzig region, the clinics in Borna and Zwenkau (without the geriatric center), to a company owned by Eugen Münch from the Federal Cartel Office in February Approved in 2014. Helios, already the market leader to date, thus became by far the largest private clinic group in Germany.

In September 2016, Fresenius Helios took over the Spanish clinic group Quirónsalud from Madrid. The largest clinic group in Spain operates 43 hospitals, 39 outpatient health centers and around 300 facilities for company health management. It has over 35,000 employees and a turnover of around 2.5 billion euros. Fresenius paid approximately 5.76 billion euros for the takeover.

On July 1, 2018, 38 healthcare facilities and 13 service companies in Germany with a focus on inpatient rehabilitation and care were transferred from Fresenius Helios to Fresenius Vamed .

In the past, Helios-Kliniken GmbH has repeatedly come under sharp criticism from various employee associations and unions . The focus was on the clinic locations in Schramberg and Rottweil , Müllheim , Berlin-Buch and Berlin-Zehlendorf . The United Service Union (Ver.di) accused Helios-Kliniken GmbH in its press release of February 26, 2006:

“Hundreds of employment contracts across Germany were transferred to the Group's own subsidiaries, mostly in areas where wage conditions were poor on the market or were completely lost. The subsidiaries have to apply for orders from their own group in competition with external companies. Employees who previously worked in the public sector for many years have to accept salary losses of up to 35 percent in these companies. "

In June 2011 the public prosecutor's office in Berlin investigated alleged billing fraud against Helios-Kliniken GmbH . According to the public prosecutor's office, there is an urgent suspicion of billing fraud to the detriment of the Berlin Association of Statutory Health Insurance Physicians. In order to close gaps in care, clinicians have often been approved to provide outpatient services, although this is actually not allowed. For this reason, the prosecutor is also examining the need to start an investigation into bodily harm. Managing director Francesco De Meo denies the allegations and criticizes the approval system in an open letter to his employees.

“Only services actually provided were billed. No excessive bills were issued. The treatments were carried out medically correctly by qualified doctors. "[...]" The patients would be better served if treatments could be provided flexibly by qualified medical teams. "

The following parts of this section since 2012 seem out of date to be : Checks the prosecutor still or what conclusions they came?
Please help to research and insert the missing information .

The research program Team Wallraff documented in an episode that was broadcast on January 11, 2016, sometimes chaotic conditions and poor hygiene conditions, especially in Helios clinics. In addition, insufficient work materials were used to reduce costs. In the program, the accusation is made of putting profit above the well-being of the patient. According to the company's website, the company's strategic goals were cited: “Every single HELIOS clinic operates as an economic unit with a clearly defined EBIT development of two percent after the first full year of service to 12-15 percent target EBIT after six Years. “Nurses and doctors are chronically overloaded and frustrated. (See also: Helios Klinikum Berlin-Buch and Helios Dr. Horst Schmidt Kliniken Wiesbaden .)

After Helios took over the majority of the shares in the entire Amperklinikum AG, including the house for geriatric rehabilitation in Markt Indersdorf , in January 2014, complaints from patients and employees increased. Among other things, the hygienic conditions, non-specialist work (nurses are used for cleaning) and a general overload of the employees were criticized. 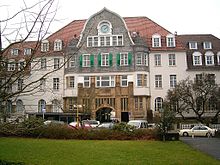